Where Can You Find Diamonds?

Diamonds are usually formed under high pressure and high heat about 90 miles beneath the earth's surface. They are normally pushed to the earth's surface by volcanoes or by magma that is trying to surface. Made from carbon and taking millions of years to grow, it's easy to see why they are so expensive. It's possible that just about any diamond you see, could be over a billion years old.

Diamonds can be found in Australia, India, South America, Africa and even in the United States. Unfortunately, due to their value as a gemstone, they can also cause human tragedy when they are marketed in, or from, poorer countries.

I am not sure what the recommendation is for trying to alleviate the negative side to diamond ownership, but one possible solution is to find a diamond yourself.

In Murfreesboro, Arkansas you can prospect for diamonds. There is a State Park there, called Crater of Diamonds, where you can search for diamonds, for a small fee. The largest diamond ever found in the United States was found at the Crater of Diamonds State Park in Arkansas. It was called the Uncle Sam diamond and originally weighed over 40 carats!

Another famous diamond from that same area is the 4.25 Kahn Canary diamond sometimes worn by Former First Lady Hillary Clinton. It was loaned to her, so she could wear it to Former President Clinton's Inaugurals as Governor and President.

Tens of thousands of diamonds have been found at Crater of Diamonds State Park and I am quite sure there are a few left!

One method of finding diamonds at the park, is by going to the park after it has rained and just walking around looking for diamonds. The diamonds are described as being smooth, translucent and vary in colors of white, yellow and brown. After it has rained, presumably dirt is washed away revealing small diamonds, on top of the soil.

This would be a great vacation destination for the springtime. No telling what you could find after a spring shower! 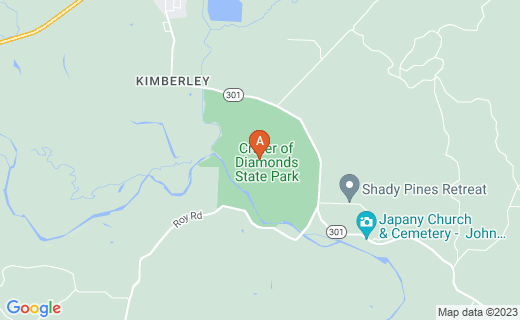