Where in the World are You?

What you are currently looking at is personally my favorite spot on the whole damn planet. At approximately three square miles, it is the smallest of the major islands of a chain that consists of over fifty large islands, small islands and cays; of which only 15 of them are inhabited. Personally my favorite aspect of this place is the fact that such a beautiful island only has a full time population of around two hundred. In this place's recent history, last one hundred years or so, the population remained relatively low until the 1990s when regular electricity and paved roads made their debut on the island. That's right...electricity and paved roads arrived in the 1990s.

Being located in a region renowned for its pirates, it stands to reason that the story regarding how the place got its name would be centered on a person authorized by a country to attack foreign shipping during wartime. While the story seems to indicate that the island was named after this man because he frequently used the islands idyllic harbors to hideout in the seventeenth century, there appears to be very little evidence to substantiate this claim. Exactly how the place got its name remains a mystery.

One thing that is not in dispute is the manner in which one of the islands most popular destinations got its name. Going back to the first years when this location opened its doors, it was constructed with no dock and no road connecting it to the rest of the island. To get there, customers would have to moor their boats in the harbor and swim in. This whole process wreaked havoc on the means by which these customers intended to provide compensation for their purchases; people were not forced to pay for their purchases with wet money which directly led to the name of this fine establishment.

This island is also home to one of the region’s most colorful characters and his equally colorful establishment, if you’ve been to the region you’ll know that there is a wide assortment of colorful characters but this man is one of a kind. Referred to as the local troubadour, the man opened this establishment in the 1960’s and it has been one of the most popular locations in the region ever since. Considered a musician, a poet, entertainer, entrepreneur, and a fantastic storyteller there are very few people like him. In an effort to mitigate the damage caused by his absence from his establishment, the man put in a life size mannequin to fill in for him on his days off. I know exactly where this place is but the question is; so do you know Where in the World are You?

Jost van Dyke, or as I like to refer to it as heaven, is the smallest of the four main islands of the British Virgin Islands in the Caribbean, and home to less than 300 full time residents. The story surrounding the origin of the island’s name seems to be centered around a Dutch privateer, a person authorized by a sovereign government to attack enemy shipping during times of war, named Joost van Dyk. While there is no doubt that van Dyk was one of the first European settlers in the British Virgin Islands and the island’s namesake, there is no factual evidence that he used the various bays of the island to hideout from authorities. Joost van Dyke established the first permanent European settlement in the B.V.I. as a location called “Soper’s Hole” on the island of Tortola.

The British Virgin Islands consist of the four main islands: Tortola, Virgin Gorda, Anegada, and Jost van Dyke; as well as fifty plus smaller islands and cays. The capital of the British Virgin Islands is Road Town located on the largest of the islands, Tortola which has a population of just over 27,000. Jost van Dyke is a far cry from the metropolis of Tortola, with a population of less than 300 and has only enjoyed the benefits of electricity and paved roads since the 1990’s.

Perhaps Jost van Dyke’s most famous establishment has benefited in large part from the slow arrival of modern amenities. The Soggy Dar Bar, home of the infamous drink known as the “painkiller”, got its name due to the lack of a road or any other land based means of connecting it to the rest of the island. Sitting in the middle of perhaps the beautiful beach on the planet along definitely the most beautiful bay, White Bay, on the planet; patrons were forced to swim into shore from their boats anchored in the bay. Obviously, any money they had on them would certainly get wet forcing them to pay for their merriment with wet money, hence the name Soggy Dollar.

Jost van Dyke’s most famous resident, the troubadour of Jost van Dyke and owner of Foxy’s Beach Restaurant and Tamarind Bar, Philicianno Callwood, better known as Foxy. Foxy is a seventh generation Jost van Dyker, and not shy about relating the fact that if not for slavery he most likely wouldn’t be where he is today. Most days and nights he can be found on the stage at his bar playing the guitar, singing, or reciting poetry he is truly a renaissance man. A successful entrepreneur to be certain, perhaps his most significant work comes in the area of conservation, having helped to establish the Jost van Dyke Preservation Society for conserving the island’s land, seas, living creatures and culture. His work as earned him recognition from the Queen of England and earned him a medal honoring him as Member of the Order of the British Empire. If the island of Jost van Dyke isn't enough to keep a person coming back year after year, the entertainment found in the work of Sir Foxy Callwood should be. 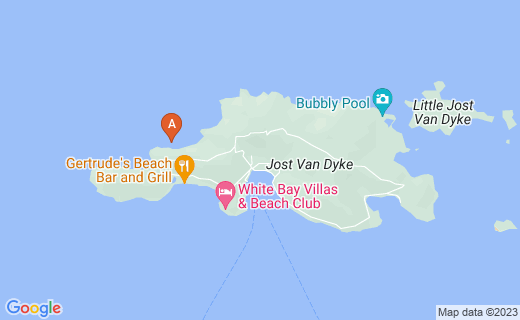