Where to Find Puffins Around The World

If you live anywhere along a North Atlantic coastline, whether on the American or European side, you probably think a puffin is a black and white bird with an orange beak that looks like this:

If on the other hand, you live anywhere along a North Pacific coastline, you probably think a puffin is a black and white bird with a yellow and orange beak that looks like this:

Which puffin is cutest? Take the poll.

Which looks the cutest?

Which puffin looks the most comical?

Which do you think is the funniest?

All puffins are members of the Auk group of birds. Other members of this group are the guillemot and the razorbill. All auks have round bodies, short tails and small wings. They are generally better at swimming than they are at flying. The three generally recognised types of puffin are:

There is also a fourth bird that many ornithologists now consider to be a puffin, although it does not have the name. This is the:

All puffins live most of their lives far out at sea, only coming ashore during the breeding season. For most colonies this begins in mid April and ends in mid August, but some birds may arrive as early as March or as late as May and some leave earlier or later in August. To have the best chance of seeing puffins visit their colonies from late May until early August. You are unlikely to see baby puffins, known as pufflings, because in most colonies they will be tucked away in nests. The Tufted Puffins and most Atlantic Puffins build their nests in burrows on cliff tops, and the Horned Puffins nest in caves or crevices in rocks. In some places where the terrain is too rocky for burrows, Atlantic Puffins also use rock crevices. In particular the Atlantic Puffins that breed on rocky islands off the coast of Maine, in north-eastern USA, make their nests in this way.

The puffin in the first photo, and in the one on the right, used to be called the Common Puffin, but now it’s more often known as the Atlantic Puffin. (Both those names took a lot of imagination didn’t they?) Atlantic Puffins do stray a little from the Atlantic, but only as far as the North Sea, which is the sea between the UK and Europe.

Nobody knows exactly how many Atlantic puffins there are in the world, but most estimates are over 12 million. It can get confusing trying to work this out as sometimes puffins are counted in pairs, and sometimes not.

These are the top countries to see Atlantic puffins:

Over half the world’s Atlantic Puffins have breeding grounds on Iceland. The largest colonies on Iceland are on the Westman Islands a small group of islands off the south west coast of Iceland. Because people on the Westman Islands have hunted puffins until very recently the puffins there are wary, but the puffins at the Hornstrandir Nature Reserve in the northwest of Iceland are very tame and it’s possible to get close to them.

Norway has the next largest Atlantic Puffin population, with several large colonies. Some estimates suggest Norway has around 30% of the world’s Atlantic Puffins. The largest colonies are on islands of Northern Norway. Western Spitsbergen, Lovund Island and Anda Island all have large puffin colonies.

Scotland has the largest proportion of the UK’s puffin population and again the puffins prefer to nest on islands. My article Where to Find Puffins in Scotland gives more details on the most accessible puffin grounds in Scotland. The Farne Islands off the Northumberland coast have the largest puffin population in England, and there are smaller colonies on the island of Lundy in the Bristol Channel and the of Skomer Island and Puffin Island off the coast of Wales.

The Faroe Isles has a sizeable population of puffins.

Canada and The United States

The vast majority of North America’s Atlantic Puffins have their breeding grounds along the eastern coast of Canada. The largest colony, Witless Bay Ecological Reserve, has over 500,000 adult puffins.

A few have colonies on rocky islands of the coast of Maine, with Machias Seal Island in the Gulf of Maine having the largest population of between 6000 – 7000 puffins.

The Horned puffin gets its name because it appears to have a little horn above its eyes. 85% of Horned Puffins have breeding grounds along western coasts of North America with the largest concentration in Alaska. The next highest population of Horned Puffins breed in Eastern Siberia and smaller numbers have breeding grounds in British Columbia. Occasionally some are found as far south as Washington and more rarely in Oregon.

Most Horned Puffins do not nest in burrows, but in crevices in rocks.

Of the three types of puffin, Horned Puffins have the smallest population, with only an estimated 800,000 – 1 million worldwide. The numbers have fallen dramatically since the 1970s, possibly by as much as 80%.

During the late 20th century many Horned Puffins were accidentally caught in large fishing nets and died. Changes to fishing practices means fewer puffins now die in this way. The main predators of the Horned Puffin are the Arctic fox, the red fox and some rats.

In some areas of Alaska people still eat puffins and their eggs, but this practice is now uncommon.

The worldwide population of Tufted Puffins in is around 2.5 million.

They are the biggest of the puffins, being about 15 inches tall and weighing around 1.7 pounds. The most striking difference between Tufted Puffins and the other species is that their bodies are completely black, with the only white area being on the face. They also have long sandy coloured tufts that stretch back on either side of their heads, giving the appearance of having hair and adding to their comical look.

Tufted Puffins share habitat with the Horned Puffin, but do not go as far north and go further south. As with the Horned Puffins, they mainly breed on islands off the coast; for instance, Tatoosh Island off Washington and Haystack Rock off Cannon Beach in Oregon both have large Tufted Puffin colonies. Some have breeding grounds as far south as the Farallon Islands in San Francisco Bay. Many companies offer trips to the islands to see these birds.

The Rhinoceros Auklet is also sometimes known as the Horn-billed Puffin or the Unicorn Puffin.

Its breeding grounds are in the same range as the Tufted Puffin. The two bird types are closely related, although the Rhinoceros Auklet is less striking in appearance. Like the Atlantic and Tufted Puffins, it makes its nest in a burrow.

There are estimated to be around 1 million - 1.25 million Rhinoceros Auklets in the world.

Maps showing major breeding grounds for puffins around the world 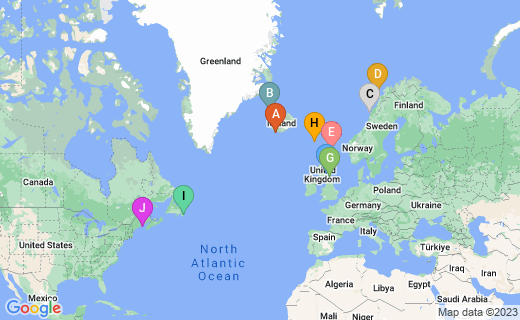 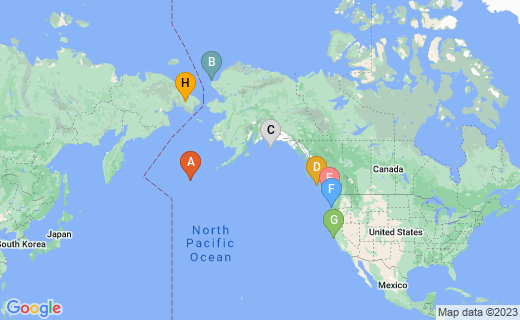 The Scottish Seabird Centre has boat trips to islands to see puffins, and is working to preserve puffin habitat