"Who's the Daddy?" (And Other Common Questions on WebAnswers)

This is a question that, in my opinion, seems to get a lot of airplay on WebAnswers. There always seem to be several queries from women who - after close encounters with different men - find themselves pregnant and are curious with respect to being able to determine who the father is.

First, I freely admit that there's nothing surprising about the fact that women - married or not - tend to have healthy, active sex lives. I'm not even shocked about the fact that women can be extremely promiscuous, having intimate relations with different men just a few days - sometimes even just hours - apart. (And just to be clear, I have no problem with either of these facts.)

What has caused a slight wrinkle in my brow is what appears to be the complete disregard of precautions that seems to occur during these casual encounters. Without being judgmental, I'm just a little surprised at the risky behavior that's engaged in - not just from the standpoint of getting pregnant, but also with respect to infection and disease. Moreover, this is - in most circumstances - behavior that is engaged in not just once but twice (and in close proximity to each other.)

That said, the typical response to this question is, of course, that a DNA test will be required to be absolutely sure of paternity. The encounters are often just too close together for the answer to be anything else.

Can My Criminal Record be Sealed or Expunged?

If you committed an offense when you were a minor and it's currently appearing on background checks, there's a very good chance that you could petition a court and have your records sealed. However, if you were an adult when it happened, you can practically forget about it.

For incidents that occurred after you reached the age of majority, you typically can only have your record expunged if you were somehow exonerated of the crime or you receive a full pardon. Beyond that, about all you can do is distance yourself from what occurred via the passage of time and by being a model citizen in the interim. You are free to try to have your record scrubbed clean, but it's likely to be a waste of time, effort and resources.

My Son/Daughter Won't let Me See My Granchild! How Do I Sue for Grandparents' Rights?

There tend to be a decent number of questions relating to grandparents wanting to sue for grandparents' rights. In general, however, there ain't no such animal.

As a grandparent, you typically do not have the right to see your grandchildren. You are a third party to the parental relationship; it's mom and dad who get to dictate who their children interact with - even as relates to grandparents and other family members.

In rare cases, however, courts will grant grandparents the right to see grandchildren, but usually this is under unique circumstances. For instance, assume a married man with 2 kids dies suddenly while still relatively young (both of his parents are alive). If the widow somehow prevents the paternal grandparents from seeing their deceased son's children, a court might allow them some sort of visitation. The reasoning behind this is that - among other things - had the father lived, he would most likely have been the link that allowed his kids and parents to have a relationship. His death shouldn't prevent that relationship from developing.

In short, beyond unique circumstances like that described, you are unlikely to get grandparents' rights because they really don't exist.

(This poster is available at AllPosters.com.) 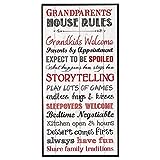 In short, there's usually no end of interesting questions on WebAnswers. Some of them are common in the sense that they get asked multiple times, but there are also some that are rather unique. (I guess those will have to go in another hub!) Regardless, it's great to share your expertise with people who genuinely need help - not to mention getting paid for it! (If you're curious as to what you can possibly earn on the site, you can visit HubPages vs. WebAnswers: An Earnings Comparison.)