Why can Diamonds be white and Graphite is black even though both are made from Carbon?

Diamond is the hardest known mineral and extremely hard to scratch - on the other hand Graphite, which is used in pencils is soft and crumbly.

It is hard to believe that Diamonds and Graphite are actually the same element - Carbon.

Carbon - Building Block of Our Planet

Carbon is the fourth most abundant element on our planet - only hydrogen, helium and oxygen are more present. Carbon (along with hydrogen and oxygen in the form of water) is what makes up living beings. It's why when people are created, we are are left with evaporated water and charcoal.

Carbon is an extremely flexible element - it can bond with itself in different ways or it can bond with other elements to form a large variety of compounds (For example Carbon Dioxide is a compound formed when one atom of carbon joins with two of oxygen). 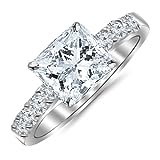 The reason why Diamonds and Graphite have such different characteristics is that they are have completely different structures of carbon.

These different structures are called allotropes. It means that the carbon atoms have bonded together differently.

In the case of Diamonds, you can see from the illustration below that its structure is an interwoven mesh and this is why it is such a hard, strong mineral.

On the other hand, you can see from the illustration below that Graphite is made up of sheets of carbon atoms that have little holding them together. So this is why Graphite is so soft and is able to rub off so easily.

The Different Structures of Diamonds and Graphite

Why are they different colors?

Humans perceive color by how our brain processes the light bouncing off an object's surface. Trippy but true. Because different surfaces have very different structures, light bounces off them or is absorbed by them highlighting different parts of the light's spectrum. Think of a rainbow - all the colors in it are what makes up light's spectrum of colors. The collection of all colors appears to us as white (so if all colors are reflected back to us), the absence of color in light appears to us as black (so if all color was absorbed by an object).

Diamonds and Graphic are different colors because they have different structure so the light bounces off them differently.

In the case of diamonds, white diamonds are actually clear not white - they are colorless. Like glass, they allow light to travel through them. However, diamonds are often faceted - that is cut so that they have lots of surfaces to reflect light back to the viewer which can give them a whitish appearance.

Carbon absorbs light and thus appears to us as black.

Diamonds can come in lots of different colors

Diamonds are not only available colorless but are available in a variety of colors including yellow, brown, blue, green, grey and black. The cause of the different colors can be from impurities (other elements present when the diamond was formed), irradiation or physical deformation of the diamond crystal (which is also known as plastic deformation). In the case of some black diamonds, it can be flaws inside the diamond that absorb light and thereby give it a dark appearance.