Why Did Iwo Jima Happen?

Maybe the first question to ask about the battle of Iwo Jima is why it happened. As I have been researching Iwo Jima to write a book, I found many things fascinating about this battle that used to be just a name I’d heard. Since my book is supposed to be for children, many details of the battle just could not be included.

Of course, that is somewhat ironic, because most of the Marines who fought on Iwo Jima were only a year or two beyond official childhood themselves. But whatever their age, they were adults; they had to grow up fast, if they were to survive. We owe it to them to remember; we owe them a lot. If they had not fought the Japanese as they did when they did, we could not be friends with the Japanese now.

Worth Dying For? Iwo Jima as it Appeared Before the Invasion

The Marines of Iwo Jima

The Marines on Iwo Jima mostly were children during the Depression, and would have had little chance to travel far from where they grew up, compared to what we are used to today. Remember, this was before both standard seatbelts and interstates!

Then suddenly they were sent all over the world, some across the Atlantic to the countries their grandparents came from, others across the Pacific to countries they’d never heard of. And some to the Volcano Islands, including one volcanic island named for its sulfur smell, Iwo Jima, where they fought and died for a hellish, rocky island.

The Battle of Iwo Jima Would not Have Been Fought, in Any Previous War

Iwo Jima had no reason to be significant in any other time of history. Yet in 1945, men fought so hard they died for Iwo Jima at the rate of over 3000 per square mile. Why?

If the course of war in the Pacific had gone a different direction, Iwo Jima would not have mattered so much. If we had been fighting Japan in World War 1, Iwo Jima would probably have had little importance. World War 1 airplanes were made for flying distances like that from one of the main Japanese islands to another. Certainly not the almost 1500 miles from Saipan to Tokyo.

On the other hand, if the battle had been a couple decades later, it would have been less critical because airplanes were more reliable. 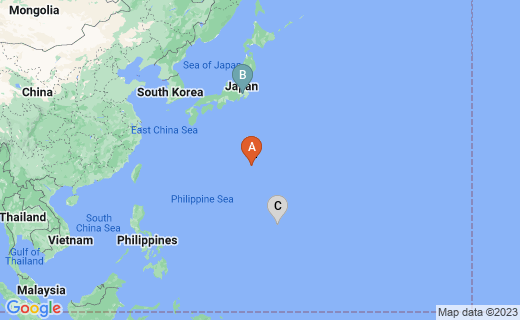 Island of Iwo Jima; eight and a half square miles of land in the middle of deep blue sea.

American bombers started for Tokyo from here. Note that the line from here to Tokyo is straighter on a round globe.

As it was, Iwo Jima was almost exactly halfway between Saipan and Japan. There were US bombers in Saipan. They could hold enough fuel to fly straight to Tokyo, drop their bombs, and come back, if nothing went wrong. If something went wrong, the only land on their flight path besides Iwo Jima was Japan, and an ocean landing would probably be safer than that.

Iwo Jima was about eight square miles in the middle of endless ocean, but that was big enough to have an airfield. An airplane in trouble could land there, and many had trouble – during the few months left in the war, there were over 2000 B-29 landings on Iwo Jima, potentially saving over 20,000 aircrew lives. Of course, not every landing was an emergency, but there were plenty of problems an aircraft could have in almost 3000 miles of flight. Remember, too, that these were planes made for the war effort, produced as fast as possible, in new designs without the luxury of lengthy testing.

The aircrews were getting rebellious about the conditions; they knew if they were lost over the Pacific in wartime nobody was going to spend the millions of dollars on them that had been spent a few years before looking for Amelia Earhart.

Iwo Jima in US hands would be a great help to the aircrews. Iwo Jima in Japanese hands was terrifying to the aircrews; they did not really have the fuel to fly around Iwo Jima, so they were vulnerable to the attack of Iwo-based airplanes, and the Japanese on Iwo Jima could warn Tokyo that they were coming, preparing Tokyo to attack and reducing the effect of the bombing. A surprise punch hurts much worse than one you are tensed for, and bombs that are expected would have to do much more damage to have the psychological effect of an unexpected bombing.

Update - December 2016: A commenter said: "It's not even close to correct that capturing the island prevented warnings of bomber attacks flying over. Remember the island just 20 miles away, where George Bush was shot down trying to bomb its radio towers? That island was never captured (until the end of the war), and the radio station worked the entire time."

I wrote to Manuel Martinez, of the Fourth Division, the platoon sergeant personal hero of "my" veteran Bill Hudson, and asked about Chichi Jima. Martinez was already experienced in amphibious landings before Iwo Jima, and he received the Silver Star for his actions on Iwo Jima. My impression in corresponding with him is that he is a very humble man, and I suspect he would have received the Medal of Honor if everything he did were documented. Colonel Justice Chambers, who did receive the Medal of Honor, singled out Martinez as an example of what was so impressive about the Marines' fighting.

His answer is the statement of the man who was there about why he was there: "About Chichi Jima, Yes I believe, they were still warning Japan, about our bombers going there. Even after we took Iwo. Thank God the Air Force had a place of refuge when they couldn't make it back to Guam."

Better Than at Sea: a B-29 Superfortress After Crash Landing on Iwo Jima

Was Bombing Japan So Important?

The way the Japanese fought on Iwo Jima and Okinawa showed why the bombing was important. The bombing wasn’t about destroying the enemy; the Japanese were quite willing to destroy themselves, whenever the alternative was surrender. It was about shocking them into stopping the war.

The Japanese had brought war to other countries all around the Pacific (countries as far away as India and Australia came close to falling to Japanese control) and they were fighting fiercely for every bit of it. They fought hardest for land that was “really” Japanese, before World War I. Surrender was not an option, either to the individual Japanese soldier or to the nation, even though they had been clearly (to Japanese leaders; the people didn’t know) losing the war for a couple years already.

On Iwo Jima, over 99% of Japanese chose death over surrender. Prisoners were rarely taken unless a soldier was shell-shocked or otherwise unable to kill himself fast enough. What do you do faced with an enemy like that? You can:

So the US tried bombing raids, first firebombing that destroyed large parts of Japan’s major cities, then the atomic bombs to demonstrate that now most of a city could be destroyed with just one bomb.

Japan: Shocked but not Awed

So were the Japanese shocked? Eventually, of course, but it took a whole lot of shocks besides the atomic bombs. It was a shock to the Japanese even to have American airplanes in Japanese airspace. It certainly cast doubt on those who said Japan was winning the war. But losing the war was not a reason to surrender. It just meant one would die for the emperor rather than live for the emperor. So the shocked Japanese continued to send out soldiers, and continued to prepare for the eventual defense of the homeland.

Taking Iwo Jima itself was another shock. It was actual Japanese territory (though it was far from Japan, nobody else seems to have cared about claiming it until World War 2). The Japanese knew Iwo Jima was strategic to the US. One Japanese major, Y. Horie, proposed denying the US the use of the island by sinking it or at least cutting it in half so it could not be used for an airfield.

Why is Iwo Jima Remembered Today?

Iwo Jima had to be taken, but so did lots of places. But Iwo Jima is remembered more than others because of the overall attitude the Marines showed in taking it.

The personal and financial costs of the war in the Pacific were growing even as the war in Europe was clearly wrapping up. America wanted it all to be over. But the fight for Iwo Jima, and the famous photo that symbolized it and the war, showed the Marines weren’t giving up; they were going to win however fierce the opposition. As Major General Erskine said when he dedicated Third Division’s cemetery on Iwo Jima, “Victory was never in doubt. Its cost was.” Marines did not know if they would live to see Iwo Jima taken, but they were sure it would be taken. How could a war-weary public not get behind courage like that?

Iwo Jima is considered the signature battle for the Marine Corps because it symbolized their esprit. Fred Haynes, a captain on Iwo Jima and later a general, said:

You have this animating spirit, this belief in the guy on your right and the guy on your left. They’ve all been through a similar kind of training, and it’s tough training done by people who have been in some pretty tight spots. You understand that these guys know their job, and they will cover you and you them. It’s a belief, too, that you can’t beat us because we’re in it until the end, and we’re in it together as Marines. You may knock a few of us off, but if you do, watch out. If you kill Marines, one thing is for sure, there will be other Marines coming along soon, and they will keep coming until they find you.

It worked. The battle was supposed to take a couple days. It took more than 36 days. But, finally, it worked.

The Rest of the Story: My Book About Iwo Jima Veteran Bill Hudson