Why do humans have large brains?

Humans have brains that are about 1/40th of the size of our bodies. This is one of the largest brain sizes in the animal kingdom, although some small birds, rodents, and ants have larger brain-body ratios.

Understanding why humans have large brains requires a basic comprehension of the major findings of evolutionary theory. Humans descended from a common ancestor to modern apes; a view supported by the fossil record and our striking genetic resemblance to the other great apes.

We belong to a family that includes the chimpanzee, gorilla and orangutan. All of these great apes interact socially within their species, suggesting that our common ancestor exhibited the same behavior.

Anthropologists such as Robin Dunbar have shown that the other great apes live in social groups of no more than 80 individuals. If there were any more in the group then it would fall apart through in-fighting. This occurs because they don’t have the ability to maintain relationships with more than 80 individuals in the time they can allocate to being sociable. As apes must eat, sleep, and forage, they can only allocate about 20% of their time to social activities. The other great apes cannot communicate verbally, so the way they socialise is by grooming each other. This physical contact releases endorphins that calm the ape, engendering feelings of warmth and good-will. 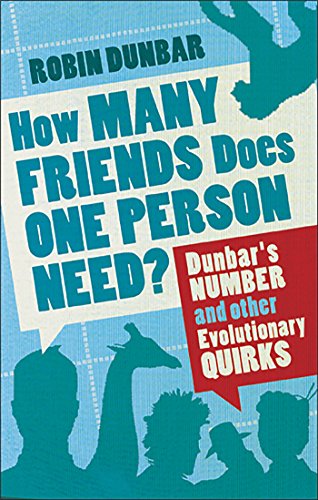 How Many Friends Does One Person Need? Dunbar's Number and Other Evolutionary Quirks
Robin Dunbar
Buy Now

Humans shake hands to promote the same good will, and we touch each other to enhance intimacy. However, humans can also communicate verbally, which is a much more efficient means of socialising. For example, we may talk to many people at the same time; we may convey a greater quantity and quality of information to the people around us, and we may do this while our hands are free to do other tasks. We humans make much better use of our social time, allowing us to sustain social groups of up to 150 individuals. This intriguing result was discovered by Robin Dunbar, and is known as Dunbar's number, or the maximum number of social relationships possible for a human to maintain.

A social group is defined as a collection of individuals who know everyone else in the group at the level of personal relationships. The ability to form large social groups became part of human life because it is adaptive. This basically means that people who utilized verbal communication to make more allies were better at surviving and reproducing than people that didn't. They were better at surviving because the increase in social group size meant better security against rivals and predators, and a greater ability to hunt large prey. This eventually led to everyone being able to use language.

Once we had language, we suddenly had a wealth of new ways to socialize. We could advertise our qualities, seek advice, deceive, or police others deceiving us. The complexity of our social relationships grew to reflect the social differences we see between ourselves and the other great apes.

This complexity required mechanisms within the brain to compute the wealth of relevant information that we were receiving through verbal communication. The information needed to be understood, and it needed to promote adaptive behavior. The part of the brain that took up the task is called the neocortex. To accommodate these new mechanisms, the neocortex forged new synapses, becoming larger and more powerful. It now makes up 70% of the human brain, which is the highest percentage in the animal kingdom. Thus, humans have large brains because of our large neocortex, although animals such as whales and elephants will have bigger brains due to their much larger bodies. Nevertheless, these animals do not have a large neocortex.

The essential finding of Robin Dunbar's social brain hypothesis is that language allowed humans to drastically increase the efficiency and methods of their socializing, leading to social group sizes as large as Dunbar's number (150). This required a larger neocortex to compute the increased volume of socially relevant information coming from speech. Compared to the other great apes with whom we share a common ancestor, this increased our brain size drastically in relation to our body size. So, why do humans have large brains? It's because we are uniquely social creatures.