Who were the bravest women in World War Two?

I think this is an impossible question to answer - all women both at home and abroad gave their all in defence of their country. Some women though, were just that bit closer to the action. These women worked behind enemy lines.

This article is all about the nurses who served behind enemy lines in field hospitals, hospital ships and on war planes. They became part of the Nursing Corps doing invaluable work wherever they were sent in the world.

The Nursing Corps in World War Two could not hide - they travelled to wherever the troops were sent, providing vital medical aid. They were never far from the front line.

We should all admire the work carried out by these amazing women in World War Two.

In Britain, the Army already had an established nursing regiment. The QAIMNS (Queen Alexandra's Imperial Military Nursing Service) was aligned with other Army regiments to ensure that the nurses achieved some kind of ranking system, although none were commissioned officers. The QAIMNS became QARANC over the intervening years but in 1939, still with their old name, they became the main medical corps for the armed forces abroad.

Countries in which they served included Singapore, Burma, China, France, Italy and Malta.

They were stationed wherever they were needed and did a tremendous job of coming to the aid of not only soldiers but also injured civilians.

You will find an excellent account here of a British Army Nurse, Margaret Finley, who paid the ultimate price for her work whilst attempting to escape from Singapore under Japanese fire. She was not alone in this sacrifice, many nurses lost their lives or were badly hurt when their hospitals and aid stations came under enemy fire.

The poster girl for the US Nursing Corps looks so glamorous doesn't she? But of course, the reality of serving behind enemy lines was not very glamorous at all.

World War Two was raging in Europe, Africa and Asia and the medical needs of such a conflict do not even bear thinking about and yet, it is clear that where men were sent to fight, medical staff were sure to follow.

Medical services were an absolute necessity in these 'theatres of operations'.

When the USA declared war on Germany, they had already established close ties with Britain, providing medical support in both England and Northern Ireland.

When the USA stationed most of its men in Britain, they knew that the medical infrastructure needed to be ready for the many thousands of wounded who would need to be treated after a military conflict.

US Military observers had already been to Britain to see if the British set up was correct. They were pleasantly surprised to find that the British were already prepared to deal with wounded in their own country but when the USA became involved in the war, they supported building more.

Abroad, different hospitals were set up behind the front lines. They had to be close to the action. They were very specific to purpose - it would be impossible to set up one or two hospitals to do everything. Often, already established hospitals were taken over by the medical corps but as you can imagine, there were never enough beds.

This meant that imagination had to be used - other 'structures' were used including trains.

Constance Curtis had just qualified as a midwife when she took the call to action. She initially worked in Britain but was then posted to Etaples in France, supporting not soldiers, but refugees from Belgium.

Constance worked all over the world, including France, Ireland and India. You can read about her amazing service as an Army Nurse here.

The WAAF worked both at home and abroad and one of their most dangerous tasks was to travel to battle zones and collect badly injured airmen and soldiers.

They carried out their initial nursing duties on RAF Dakota aircraft which had gone over to Normandy loaded with bombs. They then landed in Normandy and brought the injured soldiers home.

The nurses on these very dangerous missions were called 'the Flying Nightingales' and were a small band of WAAF operatives.

They were honoured for their work (albeit very long after the event) in 2009 with a Lifetime Achievement Award.

It is estimated that they helped to evacuate over 100,000 military personnel.

Hospital ships had been used extensively in World War One and were also used in World War Two though air power was much more of a danger to those on board ships in WW2.

In World War Two there were 23 hospital ships sunk by the enemy with often terrible loss of life.

The hospital ship with the most casualties was the Russian HS Armenia sunk on 7th November 1941 with the loss of 5,000 on board. It was hit by German He-111H bombers carrying torpedoes.

The USA had a great many hospital ships in service and after Pearl Harbour, nurses were the only female profession designated as 'essential' by the War Manpower Commission.

The US Nursing Corps played a key role in the South Pacific, working both on land and at sea during the long Guadalcanal conflict.

One of the most important jobs was in the care of prisoners of war released from Japanese concentration camps.

US Nursing Corps staff are represented in the musical 'South Pacific' in rather more pleasant and animated ways than was possibly the reality of war but the movie was not really about war but about racial prejudice so we have to forgive them for that.

A more intriguing account of the dangers of being a nurse aboard a hospital ship can be found in the example of the sunk Australian hospital ship, AHS Centaur which was sunk by a Japanese submarine just off the Australian coast on 14th May 1943.

Of the 332 on board only 64 survived. Among the medical staff on board, only one nurse survived, Sister Ellen Savage.

Ellen Savage had been badly injured, suffering broken ribs,a broken nose and palate, a perforated eardrum and some severe bruising. She was propelled to the surface and dragged out of the water. In spite of her injuries, she helped to create a raft from pieces of the Centaur's wreckage and provided basic medical help to other survivors. They were finally rescued 36 hours later by the USS Mugford. Ellen Savage was awarded the George Medal for her bravery.

Women In World War Two-Behind Enemy Lines - We Salute You!

So far, in this series, I have looked into the incredible work and sacrifice of four of the women's services in World War Two - the WAAF, the WRNS, the WVS and the Land Girls (WLS).

I hope you will agree that the work and service of the various nursing corps provided by the Allied nations deserve their place amongst these other amazing women.

In many respects, their sacrifice was of a different kind - when they began the war they were already professionals. Their nation called upon that professionalism and asked them to give of themselves not in their home towns but in foreign lands, in aeroplanes and on board ships.

They went to war knowing that they had the best skills to provide medical help to all of the casualties of war - they did so with little concern for their own safety and with a will to do everything they could to serve their country. Just another example of the amazing work done by women in World War Two.

Thanks so much for reading. 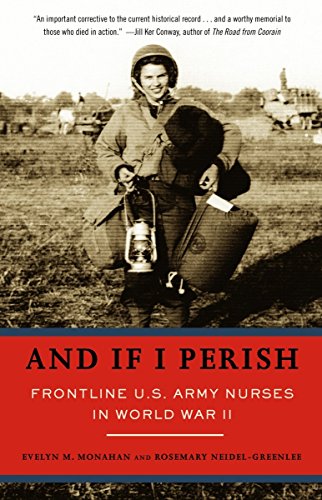