The Sea Devil Himself

In the First World War, a German sailing ship, equipped with hidden guns, roamed the Atlantic and Pacific Oceans for almost eight months. During her voyage, the three-masted Sea Eagle managed to sink 30,000 tons of Allied merchant shipping. Her charismatic captain, Count Luckner (and self-proclaimed “Sea Devil”), accomplished all this with the loss of only one merchant sailor out of the hundreds captured during his mission. For this record, Luckner was also dubbed the “Gentleman Pirate” and his crew “the Kaiser's Pirates”. Sea Eagle was one of the last sailing ships to actually fight in a war.

In 1916, although German submarines were taking a heavy toll on shipping around the British Isles, most German surface raiders were bottled up in German ports by the British Navy. Those few on the high seas had no places to refuel. It was thought that a sailing ship, even one outfitted with an emergency auxiliary engine, could stay at sea for an extended period of time without the need to refuel at a friendly port and perhaps be an effective commerce raider.

Sea Eagle was a large, steel-hulled, three-masted sailing ship displacing 1500 tons. Built in 1888 and originally an American ship called Pass of Balmaha, she had been captured by the German submarine U-36 in 1915 while trying to deliver a cargo of cotton to Russia. Renamed SMS Seeadler, or Sea Eagle, she was equipped with, among other things, an auxiliary diesel engine, two 4.1-inch (105 mm) guns that could emerge from the deck and two hidden heavy machine guns.

Count Felix von Luckner, a naval officer serving in the German High Seas Fleet, was tired of the inactivity enforced by the British naval blockade and begged to be given command of a surface raider. Because of his experience with large sailing ships, Luckner was made captain of Sea Eagle.

Sea Eagle, with its carefully picked crew of 64, left the port of Bremen on December 21, 1916 and sailed north, posing as a neutral Norwegian ship. Most of the crew, including Luckner, spoke Norwegian, so they were able to keep up the facade even when a boarding officer from the British merchant cruiser HMS Avenger came aboard to inspect her. One of the sailors even wore a blonde wig and posed as Luckner's young Norwegian wife pretending to suffer from toothache so the solicitous inspector wouldn't tarry. Satisfied that everything was in order, the Sea Eagle was allowed to proceed. She was free in the Atlantic Ocean.

Having broken out into the Atlantic, Sea Eagle began looking for victims. On January 9, 1917, she spotted the 3200 ton British steamer Gladys Royle carrying coal to Buenos Aires. After closing in, Sea Eagle hoisted the German flag and demanded that the steamer heave to and prepare to be boarded. It took three shots from Sea Eagle's hidden cannons to convince the British captain to stop. Her crew was taken prisoner and the Gladys Royal was then scuttled.

Luckner operated under “prize rules” during the entire Sea Eagle's voyage. That meant getting the victim to stop, firing warning shots if necessary and only firing on the ship as a last resort, then boarding her, taking the crew prisoner and finally scuttling the ship when everyone was safely off. This was contrary to the policy of unrestricted submarine warfare which the Imperial German Navy had resumed February 1, 1917, whereby merchant ships could be sunk without warning.

For the next two months Sea Eagle roamed the Mid-Atlantic and captured ten more ships which were sunk after their crews were taken prisoner. Among them, was the British four-masted 2400 ton schooner Pinmore which, coincidentally, Luckner had served on fourteen years earlier as a seventeen-year-old. His initials “F. v. L” were still visible carved into the brass steering wheel. He decided to sail the Pinmore himself with some of his Norwegian-speaking crew to Rio de Janeiro where they procured fresh vegetables, fruit and tobacco despite the presence of the British light cruiser HMS Glasgow which was also in port. After transferring the supplies back onto Sea Eagle, Pinmore was scuttled.

Another was the 3600 ton British merchant Horngarth which ignored a signal from the “Norwegian” ship and slipped further away. Luckner had a smoke generator lit and Horngarth turned about to help the “burning” ship. Afraid Horngarth would report the incident, Luckner had its radio put out of commission with a single cannon shot. Unfortunately, the explosion burst a steam pipe which killed a British sailor, the only death attributed to the Sea Eagle's voyage.

On March 20, Sea Eagle bagged its twelfth victim, the four-masted French ship Cambronne. By now, Sea Eagle was overcrowded with nearly 300 prisoners, so Luckner transferred them to the captured ship, gave them provisions for a month and had the tops of her masts sawn off to slow her down, giving Sea Eagle plenty of time to get away before her position could be reported. Cambronne arrived safely in Rio de Janeiro on March 31.

The Noose Tightens and the Pacific Beckons

All this activity had not gone unnoticed by the British. The 10,000 ton armored cruiser HMS Lancaster with two armed merchant cruisers were scouring Sea Eagle's hunting grounds and closing in, so Luckner decided it was time to quit the Atlantic and sail around the Cape Horn. On April 18, 1917, Sea Eagle rounded the southern tip of South America and proceeded north along the coast of Chile before heading northwest out into the vast expanse of the Pacific Ocean.

After learning of the United States' entry into the war, Luckner began looking for American ships. In June and July, Sea Eagle captured three small American schooners, taking their crews prisoner and sinking the ships.

Wreck of the Sea Eagle

Having been at sea for over seven months, Sea Eagle was in need of maintenance and repairs. Luckner and his crew finally came upon the small, nearly uninhabited island of Mopelia, a coral atoll six miles in diameter in the middle of the Pacific. The ship was too large to enter the atoll so it was anchored outside the reef, but on the morning of August 2, 1917 rough seas and a high wind beached her on the reef. Though everyone, including her 46 American prisoners, were saved, it was the end of Sea Eagle.

Luckner, however, was not ready to give up. He and five members of his crew outfitted one of the 33-foot lifeboats with mast and sail and left the atoll on August 23, heading west. His plan was to capture another sailing ship, return to Mopelia to pick up the rest of his crew and resume raiding.

After a journey of nearly four weeks and 2,300 miles (3,700 km) in an open boat, the six men landed on Wakaya Island, half-way between Mopelia and Australia, on September 18. Unfortunately for them, despite posing as shipwrecked Norwegians, a suspicious islander contacted the Fijian constabulary who arrested them on September 21 and they were sent to New Zealand for internment. Even after all this, Luckner and several others managed to escape in December and seize the 90-ton scow Moa, but he was soon recaptured by the auxiliary ship Iris. Finally, it was the end of Luckner's war and, until repatriated to Germany in 1919, he was held in various prisoner of war camps.

After the War, Luckner a Hit in America

After the war, Count Luckner wrote about his exploits as the “Sea Devil”. Never shy and retiring he embarked on a tour of the United States where he was warmly received for his daring exploits as commander of a marauding sailing ship in an era of dreadnoughts with minimal loss of life in an otherwise savage war. Politicians and VIPs were anxious to meet him and he was made an honorary citizen of several cities, including San Francisco and Miami. Lowell Thomas, who made T. E. Lawrence famous as Lawrence of Arabia, wrote a popular book called The Sea Devil - The Story Of Count Felix Von Luckner, The German War Raider.

In World War Two, Luckner Helps Save a City

After a world tour in the 1930s, Luckner returned to live in his family home in Halle, Germany. There were tensions between Luckner and the Nazis because he resisted their attempts to capitalize on his fame for propaganda purposes. He was accused of committing incest, but was never brought to trial. Instead, he was not allowed to lecture or be published.

In April, 1944, the Americans approached the city of Halle, which had escaped most of the bombing during the Second World War. After occupying the northern part of the city, they came under heavy sniper fire and a force of more than 800 bombers prepared to destroy the city. The mayor of Halle asked Count Luckner to negotiate a surrender with the Americans and most of the city was spared.

After the war, Luckner and his wife moved to Malmo, Sweden where he lived until his death in 1966 at the age of 84.

For a more detailed account of the Sea Devil’s adventures, Blain Pardoe wrote a book called “

The Cruise of the Sea Eagle.”

Location of Mopelia (AKA Maupihaa) in Middle of Pacific Ocean 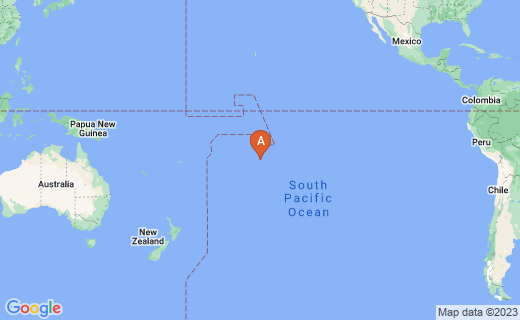