World War 1: The Scuttling of the German Fleet at Scapa Flow 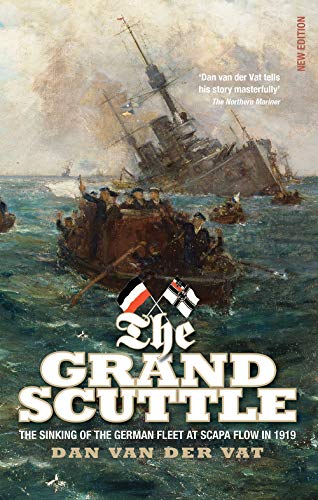 The Grand Scuttle: The Sinking of the German Fleet at Scapa Flow in 1919
Buy Now

Negotiations had been dragging on for months at Versailles, and until the treaty was signed Germany was technically still in a state of war with the Allies. The German Fleet, as part of the Armistice agreement, had been disarmed and were anchored in Scapa Flow Britain's main Navy anchorage for North Sea operations. Tensions were running high, as the negotiations turned to the fate of the German Fleet.

In Scapa Flow, Rear-Admiral Ludwig von Reuter had come to a difficult decision. News reports he had been reading did not fare well for his fleet, and he had been quietly making plans.

Early in the morning of 21st June, 1919, the majority of the British Fleet left to go on exercises. Only two ships, destroyers Vespa and Vega, remained in Scapa Flow to guard the now toothless German Fleet.

Rear-Admiral Ludwig von Reuter saw his opportunity and sent a pre-arranged signal out to the fleet: "Paragraph eleven. Confirm." It took an hour for all ships to reply via light signal or flags.

Half an hour later the crews of the Vespa and Vega looked on in horror as the captured ships, one by one, began to slowly sink into the harbour. They scrambled to signal the British Fleet to return. So began the largest scuttling in wartime history, and brought about the last deaths of The Great War.

The Treaty of Versailles: A Concise History
Buy Now

How did it all come to this?

When the guns went silent on the 11th of November, 1918. among other things, the armistice agreed on what would happen to the German Imperial Fleet, and U-boat fleet. Article XXIII concerned the internment, in either Allied or neutral ports of the 74 German ships. Their ultimate fate would be decided by the treaty negotiations.

In accordance with the armistice, the fleet sailed to Firth of Forth under Rear-Admiral Ludwig von Reuter, arriving on the 21st November, 1918. There, the ships were inspected by the Allies to ensure all weapons had been either removed or rendered useless. Afterwards the German ships were escorted a few at a time to Scapa Flow, where they were to remain until their fate was decided.

Unlike British ships, their German counterparts were not designed to be lived on for long periods of time, and had fewer doors and open recreational spaces. Trapped in enemy territory the German officers and crew soon became restless. This restlessness was exacerbated by paranoia as negotiations at Versailles dragged on and the Allies de-crewed the ships further. Crews were reduced first in December 1918, when the 20,000 strong force was reduced to around 4,700 and crews reduced yet again in June 1919, leaving 1700 crew and officers to man 74 ships.

Von Reuter became convinced that the British were preparing the Fleet to be handed over. If that happened it would be more humiliating than their defeat. In June negotiations were underway on the fate of the German fleet. Von Reuter was out of the loop, and he had no idea what was happening at Versailles. His only news came from the newspapers, which were translated for him to read. If there was a chance the fleet would be handed over lock, stock and barrel then he had to act. In May he had already started to make plans, knowing the outcome might not be favourable. Not being able to return home with his ships was a dishonour he could not deal with.

His plan was simple: remove all the inner doors as quietly as possible, and prepare to scuttle the ship by opening the seacocks, allowing water to flow freely into them.

The British managed to beach the Baden and the cruisers Nürnberg, Emden and Frankfurt, but the rest of the fleet was sunk. The Germans deliberately sunk 400,000 tons of shipping in their enemy's main harbour rather than hand them over to the enemy. Six German crewmen died as a result of the sinkings. They were the last casualties of The War to End All Wars.

Publicly. the British were outraged, but von Reuter's actions did solve the problem of what to do with the German fleet. There was no indication that von Reuter's orders had come from Berlin, and it seemed he had acted on his own in sinking the fleet. It did not stop negotiations or the formal treaty being signed.

All that was left to do now was salvage the ships.

Most of the German ships were salvaged between 1922 and the early 1930s. The salvage operation started with ships lying in shallow waters and then moved onto the more challenging wrecks which had settled into deeper water. This had to be done. Despite the end of the war, Scapa Flow still remained a major British anchorage and the sunken German ships were a hazard to shipping.

Once the salvage operation moved to the deeper waters the salvage company, run by Earnest Cox, had to find new and inventive ways of raising the ships so that they could be dismantled and sold for scrap iron. By 1939 the majority of the wrecks had been cleared, but the commencement of World War 2 put a hold to salvage operations, as Scapa Flow became active again as the main base of operations for Britain's North Sea Fleet.

After WW2 ended only three ships remained: König, Markgraf and Kronprinz. Their positions make them almost impossibe to raise, but that does not mean the metal in the wrecks have not been used. They are are source of radiation-free metal, which is vital for certain types of scientific equipment.