World War II, Allied Counter Espionage in Chile. We Participate as a Family

In my previous article, of which this is a second part, I described how my father, Edward “Ted” Robertson resigned from his job in the north of Chile near Chuquicamata in the Atacama Desert and started to work in counter espionage at the British Embassy in Santiago. This was in 1942, when World War II was at a very bitter stage for Britain and for British civilians.

I also explained that one of the important aspects that led to his contract with the Embassy was Dad’s physical appearance, with dark eyes and hair, and a very prominent Eastern Mediterranean type NOSE. All in all, a very non-British profile!

In this article I will refer to some specific aspects of his work that involved the members of his small family at different levels.

A highlight in my father's "diplomatic" career

At some time during my father’s war-time activities in Santiago, as a family we became the proud owners of a private yacht, the Virginia, normally stationed at Puerto Montt, just north of the section of the Chilean coast that is so dramatically broken up into islands, fjords and channels.

The truth of the matter was that the Virginia was stationed in the south of Chile on official duties, and the captain was a Royal Navy man assigned to Special Services. In other words, our beautiful yacht was a spy ship! I visited her on one occasion, and she was really beautiful, even to my innocent five-year-old eyes!

When I was much older, my Dad explained to me that the Virginia was kept busy tracking and reporting on the Axis deposits that were secreted in amongst all those islands, fjords and channels. I have described much of these characteristics of the Chilean coast in my article on the flight of the SMS Dresden during WW1.

These deposits were mainly for the use of the German U-boats, and consisted of spare parts for repairs, fresh water and fuel, as well as radio equipment. The deposits were in outright violation of Chilean neutrality, but then I suppose the activities of the Virginia in tracking these deposits were also in violation!

Well, when a family owns a private yacht, the members of the family would be expected to actually visit it, especially as my Dad was known as a person with sailing experience who loved to fish. So Dad went off south on periodic visits, accompanied occasionally by my mother who helped by acting as a smoke screen. And on one memorable occasion, I was included in the visit, so I also played my part in helping to spy! After all these years, I still find it rather unbelievable.

We travelled by train, my mother and I, as my father was already in Puerto Montt waiting for us. A very long train trip for a five year old, because as you know, Chile is a very long country. The distance from Santiago to Puerto Montt is approximately 913 kms. (about 567 miles).

I don’t remember leaving Santiago at all, but I do remember we broke the trip at Temuco. In those years, the steam engines were changed at Temuco and the passengers could either stay on the train for a very long wait, or stay the night in the Station Hotel and embark again next day for the last leg of the journey. Very wisely, my mother chose to stay the night in the hotel. The arrangement was really clever; the passengers stepped down from the train, walked a few paces, and entered the hotel through the back door directly from the platform. The luggage was taken care of with solicitude; the bedrooms were quite luxurious, with enormous bathrooms complete with huge claw-feet bathtubs. The down side was getting up the next morning, as embarkation was at 5.30am, and departure was at 6.00am.

In my childhood memories, that is registered as “the time we got up in the middle of the night” (!)

The train station was rather cave-like, which did not help. I've actually found a photo of it, but I don’t think the hotel exists any more. What Temuco does have, is a train museum, named Pablo Neruda Museum after the Chilean Nobel Prize winning poet, whose father was a railway man and who grew up in Temuco.

We finally arrived in Puerto Montt. I have no memories of where we stayed, but I do remember visiting the Virginia.

I can recall the captain, very smart in whites, with a nautical cap, surrounded by a lot of gleaming brass and beautiful varnished wood. The captain was tall and fair skinned, but I don’t recall much more. He owned two wire-haired terriers, the most adorable animals; they wore sailor hats and saluted to order. I got a special salute because I was the “owner’s daughter”.

I don’t remember what else we did in Puerto Montt, and I can’t remember the trip back. I probably slept all the way after all that excitement.

After the war, the Virginia was sold to a private diving company, and ended up in the port of Talcahuano many years later, looking rather the worse for wear. After that we lost track of her completely, and she only lives on in my memories.

The Monument to the German Immigrants of the South of Chile

An anchorage for medium sized boats, near Puerto Montt

The complexity of the Chilean coast south of Puerto Montt

One of the characteristics of Chile’s long coast line is the incredibly broken up profile of the coast in the extreme south, where there are multiple islands, fjords and channels that make navigation very difficult.

The area is beautiful, dangerous and ideally suited to contraband and illegal activities. It is also difficult to patrol, as the Chilean navy knows to its cost.

The presence of an innocent looking medium sized pleasure yacht would be the best method for surveillance, as it would not attract unnecessary attention. This was the important role carried out by the Virginia, with my Dad’s participation. I should imagine this was one of his more pleasant duties, considering Dad’s love for the sea!

Many of Dad’s activities were not so pleasant, however. 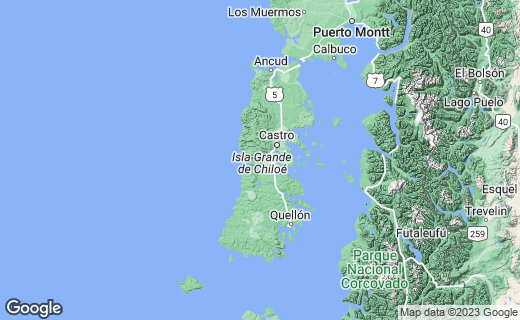 The Taitao peninsula, south of Chiloe 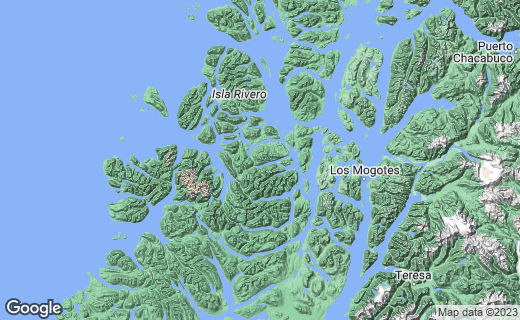 South of the Taitao Peninsula, Chile 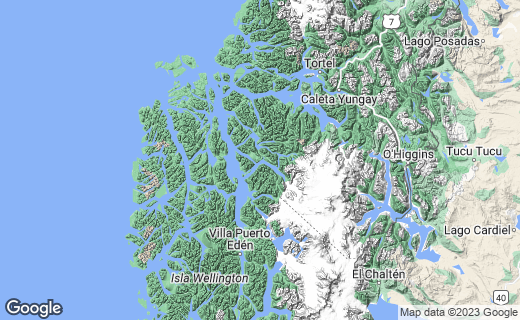 Part of Dad’s duties were related to contacting the so called “information merchants” These were traders who bought and sold information, moving through the southern Latin American countries. Many of them were of Arabic or Turkish nationalities, expatriates who felt no personal allegiance to any country and whose interests were first and foremost centered on putting money in their pockets.

These dealers sold information to all sides with impartiality. They also liked to stage meetings in low life bars in rough parts of the town, so here was where my father’s features, including THE NOSE, became so important. Can you imagine a blond, blue-eyed Anglo-Saxon walking into one of those dives? He would have stuck out like a red-blooded male in a seraglio.

The work was dangerous, especially as these merchants were also used to plant misinformation, but my father’s features provided some protection, along with his trusty gun. Still, my mother spent many sleepless nights waiting for him to come home. She was always grateful that her man was with her in Chile, but it was still an anxious time for her, especially as the Embassy would not publicly recognize these activities. If my Dad came to harm, he would have to extricate himself from the situation all on his own.

World War II finally came to an end, and Dad opted out of the service, left Santiago and worked at making another future for us in Concepción.

For a few years after, there would still be occasions in which a new arrival after introduction would suddenly say “I believe you worked in the Pigeon Loft, didn't you?” and the atmosphere would become tense, as Dad had signed the Official Secrets Act which continued to be valid for him after he left the Embassy’s employ.

All in all, on the whole we suffered no negative effects from this experience, to the point that while we were living for a couple of years in Osorno, a city that had been a Nazi hotbed, I was actually able to attend the German School in that town, from 1951 to 1952, and a very happy experience it was!

Some of our adventures in Osorno could be the basis of a future article, but with no relation to WW2.

In the meantime, I have one more article up my sleeve that relates to happenings in WW2, so stick around and enjoy!

The majesty of the Andes mountains, near Santiago