Ships with important Roles in the Southern Cone of the Americas

These two ships, HMS Exeter and HMS Ajax, played important roles during World War II, but they were in good company, as many other Allied ships also carried out heroic tasks.

However their activities had some special twists and turns that makes them relatively famous in Latin America’s Southern Cone, that area where the continent narrows down and the Atlantic Ocean and the Pacific Ocean come together.

The Tragedy of War

At the start of 1939, the drums of war could already be heard. The Civil War in Spain was proceeding to its bloody conclusion in April of that year. The Nationalist forces, led by Francisco Franco, had the support of Germany and Italy, both of them under Nationalist governments.

The repression of Germany’s Jews was making itself felt, and infamous events such as Kristallnacht or Night of Broken Glass, had already taken place.

HMS Exeter was a York class heavy cruiser. In 1934 the ship was assigned to the America and West Indies Station, where she formed part of the South American Division under Commodore Henry Harwood.

HMS Ajax was a Leander class light cruiser, a relatively new ship, completed in 1935. At the end of 1937, she joined the America and West Indies Station, also serving under Commodore Harwood.

The two ships were deployed to the Pacific, off the South American coast and paid several goodwill visits to various ports including Valparaiso, Chile. They were actually sailing off the coast of Chile, when the 1939 earthquake struck Chillán (the epicenter) at 23:32 on 24thof January at strength 8.3. Concepción was subsequently hit at 23:35. Chillán was practically razed to the ground and Concepción lost about 95% of the buildings and homes.

This is considered the single earthquake that has caused most deaths in Chile. There were approximately 30.000 victims, with no tsunami involved, the tragedy took place entirely on land.

Our two gallant ships immediately changed course and proceeded to the port of Talcahuano, to give what assistance they could.

The Disaster, a Short Description

The towns of Talcahuano and Concepción were a total wreck, with very few buildings left standing. Emergency operating centers were set up in the main square, the Independence Plaza, where surgeons were amputating injured persons as fast as they possibly could.

The bodies of the dead were collected in piles, later to be buried in large tracts of free land on the outskirts of Concepción. The water pipes were damaged and there were gas fumes emanating from various places as the gas distribution system was also damaged. Witnesses have commented that the stench that hung over the town, was appalling, and several days later, rescue teams could only enter the area wearing protective masks. Numerous fires broke out in different areas of the city, and burned unchecked due to the lack of water, and besides, all the relief squads were concentrating on digging survivors out from within the remains of the damaged buildings.

All in all, a complete disaster, caused not so much by the strength of the shake, but more related to the quality of the constructions. Most were “bricks and cement” with supplementary fill-ins that used the old adobe technique, that is “mud and straw”. The earthquake showed the need to modify the construction technology of that time, and to add more reinforcements to the building supports.

The Towers of the Cathedral are brought down

Into this horror scene came the crews of HMS Exeter and HMS Ajax, and a very welcome contribution it was! They helped remove broken masonry, they gave first aid to the more lightly injured, they distributed precious drinking water, they organized emergency kitchens, and they contributed in every way they could.

Their most remembered task, completed very successfully, was to dynamite the two towers of the Concepción Cathedral. These towers were badly damaged and threatened to collapse at any moment, so it was necessary to devise a “planned destruction” so as to avoid even more damage to the surrounding area, which happened to be the very heart of the town center: the main Plaza. The actual job was done by the Chilean armed forces, but with the indispensable technical recommendations of the experts from the Exeter. The credit has always gone to these British crews.

The Cathedral of Concepcion, classic period

British Crews in Concepcion during 1939 Earthquake

The British crews work at clearing the wreckage

While the men from the Ajax continued to work at clearing fallen masonry from the streets, the Exeter contributed another unforgettable service, that of evacuating large groups of the population and taking them to Valparaiso. This was a most opportune aid, as the roads, the bridges and the railway out of Concepción, were all badly damaged, and the area was practically isolated. Some days after the earthquake, the sanitary conditions were appalling and there was real danger of epidemics causing even more casualties. Food and clothing were also scarce, although fortunately it was mid summer.

An acquaintance of mine was one of the lucky evacuees. Her husband held a minor official position at the time, and could not attend to her needs, and she was in a difficult situation, as her first born son was just 11 months old, and her second child, another boy, was born on that same fateful day, the 24th, so he was only hours old when the earthquake struck the city. She spent some days living in a car, parked in the Ecuador Park; she described her “home” as a roomy old-fashioned Ford, one of those vintage square ones!

Accompanied by her mother, my friend traveled to Valparaiso with her two baby sons, sitting on a mattress on the deck of the Exeter. Her memories of the crew were of the best, she said they did everything possible to make their extra passengers comfortable, and there were several hundreds of them, mostly women and children. She described the ship as overflowing with family groups, stuck into every little spare place that could be found on the ship.

It is my understanding that the Exeter made more than one trip to Valparaiso with evacuees, but I have not been able to find any record with the precise number of persons that were able to leave the disaster area in this way. 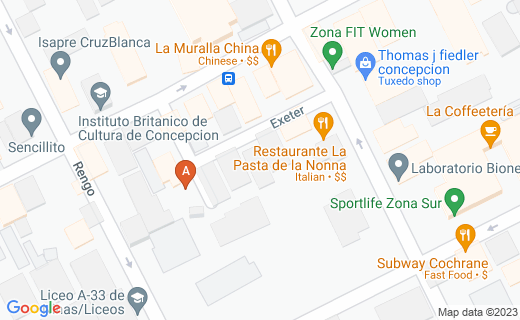 HMS Exeter Lives on in the Urban Center of Concepcion

At the time of this particular earthquake, Concepción was a rather old-fashioned, traditional sort of city. There was an important and powerful group of “aristocratic” families, who owned large rural properties in the surrounding districts and a large town dwelling in the city, preferably near the Independence Plaza. These were prime urban properties, with very large homes, something like 10 or 12 bedrooms, with a façade right on the street, and a large garden in the back.

San Martin Street, one block away from the main Plaza, had this kind of dwelling, and most of these “mansions” were destroyed in the 1939 earthquake. In one specific block, the owners sold off their large back gardens, in order to finance the reconstruction of their dwellings, which continued to border directly on the street, forming a continuous façade that is still in existence.

The new owners of the back garden properties needed to have access to them, so a short one-way street was created. It is L-shaped, and starts in the middle of one block and exits in the middle of the adjacent street. It is located about a block and a half away from the scene of the dynamited towers of the old Cathedral, so the grateful city authorities named this street “Exeter” in honor of that gallant ship.

The name is still showing on the street signs, and all the “new” constructions, which date from about 1942, are still standing. In fact, the Berlitz Language Center, where I work at present, occupies one of these properties, and the whole block has successfully survived both the 1960 and the 2010 earthquakes, with no apparent damage.

As “Exeter Street” starts just a few paces away from the Language Institute, I always make a point of asking my ESL students if they know the history of the name. Sadly, the younger generations seem to have lost all connection with the urban legends of the place where they live, work and study.

After the emergency in Concepcion was relatively under control, Exeter and Ajax took up their normal duties until hostilities broke out in September, 1939, when they were stationed at the Falkland Islands and ordered to patrol off the River Plate.

They formed part of the South American Naval Division, together with HMS Cumberland and HMNZS Achilles. The Division was still under the command of Commodore Henry Harwood.

Their greatest feat at the outbreak of the war was to confront the German pocket battleship, the Admiral Graf Spee, in the famous Battle of the River Plate.

This Battle took place in the South Atlantic, in the vicinity of the River Plate Estuary, on the 13thof December, 1939. During this Battle, HMS Exeter was severely damaged, but the small British fleet gained a strategic victory in causing sufficient damage to the Graf Spee, to induce the German Captain, Hans Langsdorff, to run for the port of Montevideo in Uruguay, and a few days later, on the 18th of December, to scuttle his ship at the mouth of the Estuary.

The news was followed with great interest by the inhabitants of Concepción and Talcahuano; after all, these were “their” ships!

For some additional information, see my article on spy rings in Latin America

In September, 1940, Commodore Henry Harwood received the Order of Merit from the Chilean government, with the grade of Grand Officer, in recognition for the help provided at the scene of the 1939 disaster area.

The Order of Merit is only awarded to foreigners and is specifically related to meritorious service provided by foreign military personnel to Chilean officials.

Commodore Harwood also received the Gold Medal of Concepción, in honor of his participation in the 1939 earthquake emergency

Both the Exeter and the Ajax went on to more glorious deeds as World War II continued unabated until the final Allied victory.

Sadly, HMS Exeter did not live to see the victorious conclusion, she was lost in 1942.

HMS Ajax survived to the end, and was finally decommissioned in 1948, and broken up in 1949. Winston Churchill did not allow her to be sold, as he felt that her important history would be better preserved through break-up.

I hope to continue to write about these two gallant ships, particularly HMS Exeter, so stick around, it could be interesting!

A Tribute to the Fortitude of the Inhabitants of Concepcion

The city of Concepcion always rises from its ashes. I am including a few photos of the present day, very progressive urban area

An Aerial View of Modern Concepcion

The Entrance to the Campus of the University of Concepcion

The Neoclassic "Hirmas Palace" in Downtown Concepcion, built in 1925