Spain is at the front of the pack

The effective discovery of the New World is attributed to Christopher Columbus. Columbus had been sailing since an early age and entered in the service of Portugal. He was convinced that the earth was a sphere, as other outstanding mariners of that time. He formulated a proposal to seek new and shorter all-water route to the east by sailing directly west around the world. Despite several attempts to gain financial support from Portugal and Spain he was finally granted an audience before Queen Isabella of Spain, who with her husband and King Ferdinand came to be known as the "Catholic Monarchs or Los Reyes Catholicos" by the Holy See. On 8-3-1942 Columbus sailed three vessels in search of said route; Nina, Pinta and Santa Maria. During the night of October 11-12 land was sighted and was named San Salvador. He would make 3 more voyages before his death in 1506. Although he miscalculated and underestimated the size of the earth, his contemporaries would soon discover that this continent was indeed a new world and not India. In 1498 Vasco de Gama (Portuguese) reached India by sailing around the southern tip of Africa. In 1497 John Cabot (for England) reached the North Atlantic coast of America. Nonetheless England didn't attempt to colonize until 1578 which all attempts were marked by failures until the establishment of Jamestown, named after King James I in 1607. Notably in 1570 Father Segura established a mission in the Chesapeake Bay area for Spain. Quebec the French's first settlement was not till 1608 by Samuel de Champlain.

The U.S. has always enjoyed a Catholic heritage. Catholics prize their American heritage the more highly because we have had to frequently struggle to maintain it. 300 years before the voyages of Columbus, Holy Mother Church had begun her mission in the New World with the establishment of a diocese in Greenland. Norsemen who sailed to the shores of Greenland in exploration brought with them priests.By 1125 the Diocese of Greenland was established. Bishops continued to reside there until 1377, a hundred and fifty years. In 986 Eric the Red began Colonization. By 1000 Leif Ericson, son of Eric reached the mainland of North America, however the exact location of his vineland is unknown and is more than likely Nova Scotia.

Although we have proof that the Vikings discovered Greenland and Iceland and did establish a colony there before Columbus the fact that Columbus is credited for discovering America has raised much debate. Who should get the credit? To add to the argument for Columbus I would suggest that while Greenland and Iceland is in the New World; it's not typically associated with the Americas. So Columbus still has his accreditation for discovering the Americas. In this sense we are able to say that Columbus is the first European to discover the Americas and that because we don't know exactly where the Vikings went on mainland North America they can't get the credit because there is no studies to shed light on that. Regardless Columbus can't be discounted for his efforts and for his landing in the Americas. 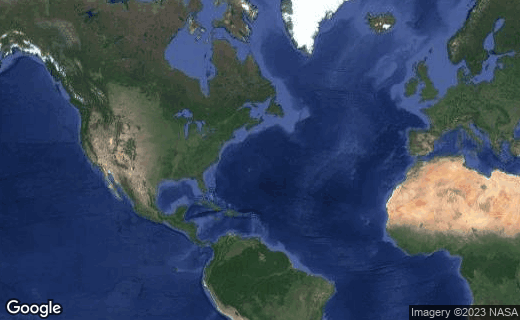 The permanent establishment of Holy Mother Church in America followed soon after Columbus' discoveries. In 1493 the Holy See appointed a Vicar Apostolic for the newly discovered "Indies". In 1511 three dioceses were established; Santo Domingo, Concepcion de la Vega (Hispaniola) and San Juan (puerto Rico). The Diocese of Baracoa was established in 1518 and was transferred to Santiago de Cuba in 1522. This was the first diocese to exercise jurisdiction on the American mainland, since the Spanish possession included Louisiana and Florida. The first parish within the U.S. was St. Augustine, Florida whereas it was established in 1565. Such establishments of diocese and appointments of bishops came long before the foundations of any present government or either North or South America. Thus the Catholic Church can claim to be the oldest institution in America.

Do you think Columbus should be credited for the discovery of America?

Catholic explorers and missionaries were the first to explore the vast majority of what is now the U.S. England had not even thought about it yet. The greater part of exploration and colonization of the New World was carried on by these predominately Catholic nations: Spain, Portugal and France. Notably England, the all to well known Protestant nation involved in colonization was still Catholic when she undertook her first voyages of explorations along our coasts. King James I and his sons were Stuarts of Scotland, the direct descendants of Mary Stuart, queen of Scots; all of which were Catholic. Columbus, La Salle, the Calverts are just a few of some of the well known explorers that were Catholic. Their expeditions were often accompanied by Chaplains. Priests were assigned to reside in the settlements and began to undertake the task of converting the Indians. Being well educated men, these priests often kept written records of their encounters and discoveries, like Fr. Bernal Diaz. Many of the Mountains, lakes, rivers and towns bear names deriving from the mysteries of faith.

Although later outnumbered by protestants, Catholics have always remained constant in their support of the principles upon which the U. S was founded. It was in the Catholic founded colony of Maryland that the principle of religious toleration was first formerly inaugurated within the limits of the U.S.

These priests worked towards establishing a vast number of missions. Before 1600, missions had been established within the limits of Florida, Georgia, Virginia and New Mexico. The most successful results were achieved in the Franciscan missions of California and in other sections of the Southwest like Texas. The task of converting the Indians could not be completed until they were taught discipline and industry, and reconciling them to the idea of living in permanent settlements, and not only providing religious education but leaving them the the fundamentals of European civilized living. The missionaries were among the first to introduce to the Americas the domestic plants and animals of Europe.

In 1632 Sir George Calvert, the first Lord Baltimore, a secretary of state under James I and Convert to the Catholic faith was granted lands for the establishment of Maryland Colony. He died however and there grand was conferred on his son Cecilius, 2ND Lord Baltimore. Maryland was the first proprietary colony and as a result Lord Baltimore received broad political, judicial and military power. These broad powers allowed him with the approval of the freemen of the colony to inaugurate a policy of religious toleration in the colony although the majority were protestant. Cecilius instructed his brother Leonard, governor of the colony, to establish toleration and thus provided a refuge for all Christians,. Father Andrew White and two brother Jesuits accompanied the settlers. The famous Toleration Act was signed in 1649, civil war on the motherland, it did not prevail when Puritans deprived the lord proprietor of his governmental powers in 1654.

Catholics of the American War for Independence

Catholics have labored with their non-catholic fellow citizens for this nation's welfare. During the American Revolution the Catholic population in the English speaking colonies were less than 30,000 and were very inconspicuous outside of Maryland and Pennsylvania, however a number of them were prominently involved in the cause for America. Charles Carroll, was a delegate to the Continental Congress. Daniel Carroll also was a delegate to the Continental Congress and the Constitutional Convention in 1787. Father John Carroll, later the 1st Catholic Bishop in the U.S. accompanied missionaries to Canada to solicit aid. Thomas Fitzsimmons a secretary and Aide-De-camp to Washington was also a delegate to the Constitutional Convention. Stephen Moylan, Quartermaster General of the Army. John Barry active at sea and ranking officer of the US Navy upon its formal and permanent organization by Congress in 1794, was known as the "Father of the Navy".

The American Revolution developed by gradual stages, it was not begun as a war for independence but a protest against what colonists believed were unjust laws. England, in order to gain more control over the colonies by establishing a permanent British Army in America, enforcing commercial regulations previously disregarded, raise money through direct taxation by Parliament. Samuel Adams, James Otis and Patrick Henry proposed that government was set up to protect men's natural rights; it did not create them and that government was the servant of the people not their master and that such impositions of taxes without consent was violation of their rights. This way of thinking was very revolutionary. In 1774 these laws that were passed were soon to be called the Intolerable Acts. Of the 5 laws one didn't concern any of the colonies. It set up boundaries for Quebec and permitted the free exercise of Roman Catholicism. The colonists opposed this because they feared loosing profits from sale of land and hating Catholicism because they wanted English penal laws imposed upon Catholics in Quebec as they were in other parts of the empire. Nonetheless the principles on which the Revolution were conducted were in harmony with Catholic thought; notably the equality of all men, the possession by every man of inalienable rights. With America free from England, Holy Mother Church still had to continue to fight. The bulk of the Catholic Population in the 13 states were found in Maryland, Pennsylvania and New York. Even though the Constitution granted religious freedom, it was a slow process and anti- Catholic sentiments were everywhere; even prohibiting many from public office.