How many of you remember the beautiful, blond heroine of the Old West, Annie Oakley? She shot and rode her way across our television screens and became an instant hit with little girls all over America. She was one of the few female heroes of the old west and I, like many other little girls of the fifties, wanted to be just like her when I grew up.

But while we fell in love with this super hero in buckskin (played by actress, Gail Davis) the real Annie Oakley was an honest to goodness heroine and model of determination during a time when most people thought that a woman's place was in the home.

Annie Oakley in the Fifties

Since I grew up in the 50's and 60's, my first contact with Annie Oakley was the fictional television show on which the beautiful Annie, with the long gold braids did trick riding and always managed to save the day with her sharp shooting. After watching several episodes of this exciting program, I discovered a biography about Annie Oakley in the school library. To be truthful, I was a little disappointed as I read about the poor, rather coarse and unattractive dark haired young backwoods woman who could shoot a rifle better than most men.

Life and Legacy of Annie Oakley 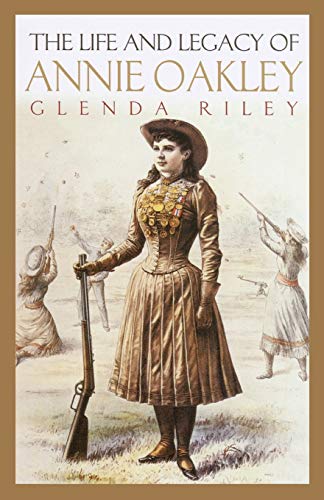 Needless to say, at that time in the fifties, I wanted to be just like the blond haired beautiful Annie on TV, but in retrospect, I'm a little ashamed of those shallow feelings. As a grown up girl of the sixties and the woman's liberation movement, I now admire and respect the real Annie Oakley who, against all odds and the social norms of the time, used her great gift to become one of the few female western role models of her time. Her example that a woman can be a champion marksman, at a time when most people thought that a woman's place was in the home, was an extraordinary accomplishment.

Annie Oakley, as she would come be to known by millions, was born on August 13, 1860 in Darke County, Ohio. She was the fifth of seven children. From the age of nine, she shot small game to help her widowed mother put food on the table.

When she was sixteen, Annie Moses become nationally know for her marksmanship after out shooting ranking marksman, Frank E. Butler, in Cincinnati.

Later Butler and Annie were married. They toured Vaudeville circuits and circuses until 1885 when they joined Buffalo Bill's Wild West Show. She starred in "Buffalo Bill's Show" and was known as "Little Sure Shot". They stayed with the show for 17 years with Annie having top billing as "Miss Annie Oakley" "the Peerless Lady Wing Shot" and Butler, her husband, was her manager, promoter and attendant. Early on, Butler recognized Annie's star quality and crowd appeal and readily took a back seat to her.

At 30 paces, with a rifle, her amazing feats included hitting the thin edge of a playing card, a dime tossed in the air and the end of a cigarette held in Butlers lips.

Annie stayed active, even after a serious injury in a train wreck left her paralyzed for a time. She never gave up and at the age of sixty-two, in a shooting contest in Pinehurst, N.C. in 1922, Annie hit 100 clay targets, without missing, from the 16 yard mark.

She died at the age of sixty-seven of pernicious anemia on November 3, 1926 in Greenville, Ohio.

The Colonel and Little Missie

The story of Buffalo Bill, Annie Oakley and the Wild West Show, with 16 black and white pictures.

The Colonel and Little Missie: Buffalo Bill, Annie Oakley, and the Beginnings of Superstardom in America (includes 16 pages of B&W photographs)
Buy Now

Which Annie Oakley do you identify with?

The television program was a fictionalized story of the Annie Oakley story. Gail Davis played, Annie, a sharp-shootin', trick ridin' rancher lady. It was VERY unusual for a female to have the lead in any series, but in a Western was extremely rare.

The series was geared toward children and was a big hit, especially with the girls. I was one of those little girls and wanted to learn how to shoot and ride. I also wanted long gold braids and a cow girl outfit. I did learn how to shoot and ride pretty well, but had to settle for golden brown braids in the late sixties and cut-off jeans with a peace symbol decorating them.

Gail Davis was a marksman and a skilled rider and she did most of her own stunt work. She was definitely ahead of her time.

Annie Gets Her Man

There were several movies about the life of Annie Oakley. Here are a few that I enjoyed:

Annie Get Your Gun Song

I didn't get a cow girl outfit when I was a child, but maybe I could dress up now for Halloween or Mardi Gras. Better late than never, but I'm not sure about the spike heeled boots.

The Rabbit Ears Treasury of Heroines entertains and enlightens with classic stories of extraordinary women–read by favorite stars and featuring original music by some of today’s greatest artists. 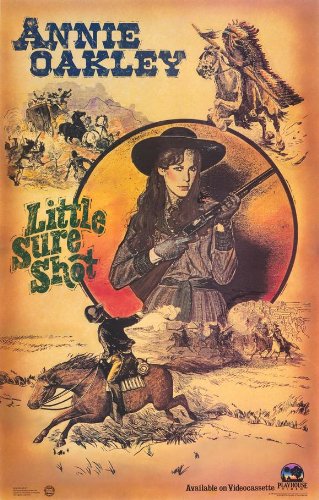 Yahoo! Annie's been reviewed by Bev at Squid Lens Review - One Woman from the Old West. All you sharp shooters should ride right over and stay for a spell.

You'll hit the bullseye with us if you leave a comment.