Anthony Ashley Cooper, who became earl of Shaftesbury, was born at Exeter House, London, on February 26, 1671.

He was a English moral philosopher. He did not create a complete philosophical system but concentrated on ethics and aesthetics.

He was educated under the supervision of the philosopher John Locke. He attended Winchester College from 1683 to 1686, and then toured the Continent for two years.

Cooper was elected a member of Parliament from the borough of Poole in Dorset in 1695. He served in The House of Commons until 1698, when he decided that he would not seek reelection because of ill health.

Cooper succeeded to his father's title in 1699. An independent-minded Whig, he played an active role in the House of Lords. He was made vice admiral of Dorset in 1701 but was deprived of his office in July 1702 when the Tories came to power. Shaftesbury then retired from public life. He left England in July 1711 because of ill health and died in Naples on February 15, 1713.

Freedom of thought and inguiry were central to Shaftesbury's approach, and for him even atheism was an acceptable position. He was the first to use the term "moral sense" by which he meant an inclination toward or an affection for virtue. This "moral sense" he believed was natural to man. Virtue did not need either the fear of hell or the promise of heaven to exist, but rather was literally its own reward.

Although Shaftesbury was a regular attendant of the Church of England, his writings reveal him to have been a Deist. He objected to revealed religion on the grounds that by resorting to the miraculous it subverted the natural order and impugned the handiwork of a good and benevolent Creator. 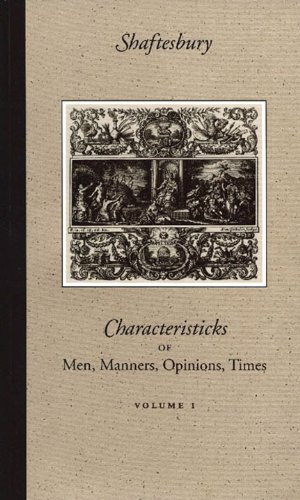 In his literary style Shaftesbury strove for elegance above all else. His writings consist of a series of essays and pamphlets that were collected and published in three volumes in 1711 under the title of Characteristicks of Men, Manners, Opinions, Times.