Ms. Venegas believes reading is essential for understanding the rapidly changing world. She enjoys sharing books with others.

Bell Starr is a famous woman in history, tabloid style, and there is myth that has to be sorted out if you explore the story of Myra Maybelle Shirley. Nevertheless, think about the path a young lady may go down, if guys like the Jesse James brothers, and also another set of brothers called the Youngers, rode in on horses with fancy saddles to your parent's home, asked for sanctuary, and were allowed to stay. Or when a teenager, your father was proud that your older brother, Ed, joined a band of civil war guerrillas for the Confederate Army in Missouri to reek havoc and robbery on the Union sympathizers in the state, a brother she was close to and taught her how to shoot a gun.

Belle Starr made very big news in her day and much probably was blown into sensationalism, but the final and true fact is she was shot in the back riding home on her horse. The murder was not solved at the time. She was 41 years old.

Her life was average at the beginning and she excelled at Carthage Female Academy and became an accomplished piano player. Her older brothers Ed and Preston were companions and an influence on her early years. Her full name as Myra Maybelle Shirley, it was later in her life that she became known as Belle Starr, the woman who consorted with famous outlaws. 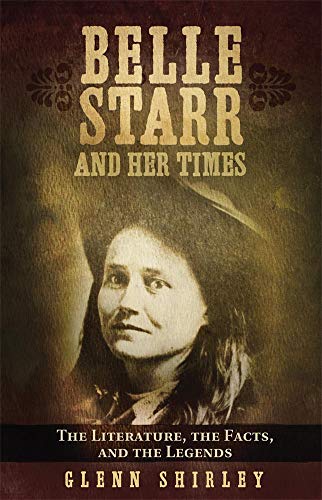 Belle Starr and Her Times: The Literature, the Facts, and the Legends
a/o 8-25-11 I bought this book used. I will be reporting back to you on this page what I will be learning about Belle Starr from this book. It was recommended by reader Tes in the comment section. a/o 10-09-11 After reading this book I am more convinced that Watson murdered Belle Starr. He was released because he said someone had borrowed his shotgun. No one pursued an investigation into her murder. No juicy tidbits in this book. All facts were based on government records and court papers of the times, not newspaper articles. I enjoyed every chapter and her knilling was covered with court records not with unreliable newspaper articles. She definitely had a eye for the dark and handsome but mainly used relationships for her own survival. Nonetheless, she ruled a gathering house, and I am sure many who came in touch with her felt some kinship. One is taken back with some skillful writing, and for me, it was exciting to spend some reading hours immersed in the Wild West, .
Buy Now

Belle Starr Woman of the West After the Civil War

Belle Starr was born February 5, 1848 to John and Elizabeth Shirley of Carthage, Missouri. The family was popular and well off. Owners of a hotel, livery, and blacksmith. Besides Belle's studies at the academy she played piano and became an expert rider and shooter under the guidance of her older brothers Ed and Preston. Young ladies of her day rode sidesaddle and so did Belle.

With the advent of the Civil War the family and the state of Missouri was met with turmoil. John Shirley sided with the Confederates. He did own a few slaves. Ed would join the notorious Quantrill band and was killed due to his unlawful activities after the war. This event hit everyone hard in the family. As the war ended and Union troops left Carthage rebels burned to the ground what was left of the town.

Bell was sixteen when John Shirley sold what he could and the family relocated to an area about 9 miles from Dallas, Texas. Some accounts have Belle leaving home with Cole Younger, 22, at the age of seventeen to ride and experience the excitement of living with a band of men. This is where the story first gets sketchy. Many say the first born of Belle Starr was Cole's but records and Cole himself attest to different facts. Belle spent a few months with the band and returned home. She was married on November 1, 1866 to Jim Reed son of family friends in Carthage, Missouri. This event is documented with a marriage license. Their daughter Pearl was born in September, 1868.

The new couple took residence with the Reed family and settled down for farming and raising the baby. Jim Reed turned to wondering and joined the company of Tom Starr a Cherokee Indian with a violent way of life and considered a renegade by the Cherokee Nation. When Belle was 21, the family moved to California to avoid a warrant for Jim's arrest. After a brief stay in California the Reed's returned to Texas. John Shirley set them up with a small ranch.

Belle had a son, Ed, and Pearl to take care of now. Belle spent seven years with James Reed. These years were filled with Jim's life as an outlaw, robber and horse thief. The children were with Bell's parents and Belle at times accompanied Jim on forays contributing to lawlessness.

This life may have had some attraction for Belle but Jim also was having an affair and so that was the end in Belle's estimation. After Jim Reed was murdered in 1874 because of a warrant she did not even appear to be grieved and she denied it was Jim Reed. Some say just so the killer would not get the reward offered, but this is most likely part of the myth of Belle Starr.

Bell Starr Is A Widow

During the time after her separation and widowhood many accounts show Belle as a thief of livestock, a bank robber and setting up housekeeping with a few male hangers on. In truth, there is no record of her actions till 1880.

She married Sam Starr the son of Jim Reed's renegade leader Tom Starr. Sam was nine years her junior and they settled on Cherokee land in Arkansas at a spot called Younger's Bend. Now that action is a bit tantalizing and there is records of it.

The pair was charged with selling horses that did not belong to them in 1882 and both were sentenced to prison terms. Belle served 9 months of a 12 month sentence in a Detroit prison by Judge Isaac C. Parker, "the hanging judge". Belle Starr was no stranger to Judge Parker. After Sam and Belle were released about the same time they returned to their place on Cherokee land.

Now Belle was known as "The Bandit Queen". The couple were in and out of legal and criminal charges until Sam was mortally wounded in shots exchanged at an evening party. See the short story about this shootout at "The Officer Down Memorial Page, Inc."

Belle liked to take studio photos and she usually dressed for the part with a glamor shot. Props such as guns, fancy hats, feathers and velvet dresses were a favorite for her to wear.

Visit Amazon to browse the publications about this take charge woman. 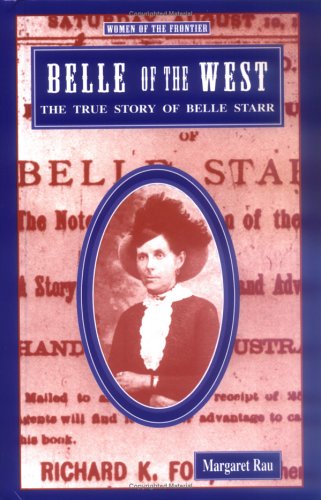 Belle of the West: The True Story of Belle Starr (Women of the Frontier)
Buy Now

Shed Not For Her the Bitter Tear

Belle was not about to leave from the place she called home on Indian Nation land at Younger's Bend. Ed and Pearl her now grown children were living there. It was arranged that she marry through the Indian Nation 24 year old Jim July, the adopted Creek son of Tom Starr, enabling the family to stay. Jim July took up residence there.

Now in her late thirties Belle was having problems with the kids. Pearl became pregnant and gave birth to a girl she named Flossie. Ed was convict of larceny and imprisoned. When he was released he harbored strong resentment towards his mother because she had left him there till she eventually got a pardon for him. Belle took to whipping her son to try to keep him in line. July was seeing another woman which Belle may have suspected and their relationship was marked by intense quarrels. She also had difficulties with a renter named Edgar Watson.

The day before Belle died she rode by horseback with July, who had to face larceny charges, halfway to Fort Smith. They spent the night at friends and Belle returned to Younger's Bend. Just a few 100 yards from Edgar Watson's place near her home Bell was shotgunned in the back and fell from the horse. The shooter walked toward her and fired again into her face and shoulder. Neighbors and Pearl hearing shots discovered her just as she died of her wounds.

Edgar Watson was charged and acquitted and the murder remains unsolved. I think Watson did it after reading this account by Richard D. Arnott for HistoryNet.com. Read this short page for the circumstances surrounding Belle Starr's death.

Which Side are the Facts On

I started reading a bio about Belle Starr and one thing I found out is many newspapers in her day were no better than the scandal sheets of today. Papers were printed with columns of fantasy authored by writers for sales. How would someone now reading through old written material, could know which printed materials were true or not?

Many people who are relatives have responded here. Put your knowledge down and we will try to establish what we can along the way. Has anyone found the facts that will help with a true picture? Feel free to add any resources on the Internet or elsewhere to help establish the truth about Belle Starr.

Leave a notch for this famous woman in history.