For Students of Classics, Myth

Students of mythology may feel nostalgia for D'aulaire's Book of Greek Myths, or recall Hamilton or Bulfinch fondly. But children's books aren't sufficient for real research in Greek mythology.

Of course, there are no substitutes for primary sources. You should be looking up Greek myths in literary sources like Hesiod, Homer, the Greek tragedians, Apollodorus and Hyginus. Don't forget the imagery and evidence of Greek art and archaeology. But how? Which sources should you consult for a particular myth?

I've TAed Greek mythology and have MAs in classics and mythological studies. Here's the books on MY shelf that I refer to again and again.

This is my go-to book for Greek mythology research. I need the myths. I need the literary and visual sources. I need to know when a particular element arrived in a myth (was that Ovid fooling around again, or is there a Greek precedent?) I need the Olympian pantheon, the cosmogony, the heroes, the mythical families, and all the rest. Now.

In two volumes, Timothy Gantz untangles an awful lot of this. It's not a beginner's book: it's broken up with lots of references to primary sources. It's a research sourcebook. (And yes, that scan is my own dog-eared copy).

NOTE: That "Buy" link takes you to Volume One ONLY. You will ALSO need Volume 2.

The Genealogy of Greek Mythology: An Illustrated Family Tree of Greek Myth from the First Gods to the Founders of Rome
Buy Now

Say you're just an undergraduate trying to get through Greek Mythology 101, and the professor's lectures bore you to tears (or Twitter), and you don't have an insane TA like me giving you dramatic renditions of Greek myths in our review sessions to help fix them in your memory. Help!

Well, here's a unique resource on Greek mythology. It actually might be a great resource for a teacher, too, if you've got a 17-foot-long wall. It's a fold-out chart of all the Greek gods, goddesses, heroes, monsters, and other mythical figures, organized into groups, with inset boxes covering important myths and lists like the labors of Hercules. There's also a constellations chart and a great map of Greece labeled with heroes' home towns. Yes, there's an index.

It tucks into a hardcover jacket, so you can slip it in your backpack and take it off to study at Starbuck's. Also, it folds more easily than a map, so you can flip through it without having to open the whole thing.

Art and Myth in Ancient Greece

This is a fantastic book, a compendium of Greek mythology based on art instead of just literature, and my favorite of all the books featured on this page.

Greeks did not just tell stories with words; they told them with art. The myths that artists depict aren't always the same as in the literary texts, because some myths work better as long stories, whereas others work better as dramatic vignettes. Also, Greek vases survive better than Greek manuscripts, which have to have been copied. Knowing Greek mythology through art gives you a much richer and more complex understanding of it.

T.H. Carpenter's book covers the gods, major heroes, a few notable events like the Caledonian Boar Hunt, and the Trojan War. It's a little dense, since he's throwing in a lot of art and archaeology, but for serious students of classics and Greek art, it's a must-have.

The photos are black and white (370 illustrations), but excellent quality; it's a great compendium of Greek art as well as myth.

Structure and History in Greek Mythology and Ritual

Walter Burkert is a must-read classicist, able to strike a balance between old-school classical studies and critical theories like structuralism. Burkert's specialty is Greek religion, and he's very good at untangling it for us.

In this book, Burkert focuses on myths and symbols of major and minor Greek cults: Hermes, Demeter, Hercules, e..g. Burkert steers a course between analyzing classical mythology and cult, and exploring modern scholarship on myth and ritual.

Extensive notes and bibliography add to the usefulness of this book.

I also recommend that student of classics check out Burkert's Greek Religion.

This book deepens our understanding of Greek gods, myths and religion through archaelogical evidence, some of it excavated quite recently. In particular, it fills in a lot of the gaps in our understanding of early Greek mythology, before the literary sources took over and sorted many of the myths into neat narratives and genealogies.

The most valuable part of this book, for me, is that it digs into the evidence for many Greek gods (Athena, Poseidon, Hera, Zeus) in the Bronze Age, plucking out tantalizing clues from Linear B. It's surprising how old some of the gods (Dionysos) are, and how other gods (Apollo, Aphrodite) arrive in Greece much later. 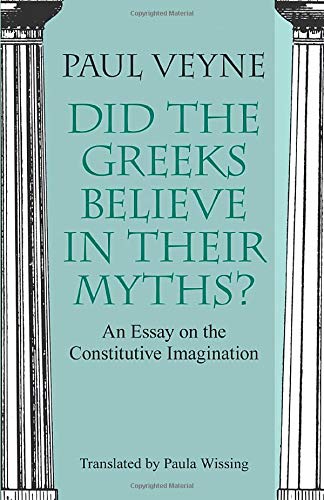 Did the Greeks Believe in Their Myths?: An Essay on the Constitutive Imagination
Buy Now

Did the Greeks Believe Their Myths?

This is an excellent and thoughtful book not just about Greek mythology and irrationality (see below), but on the nature of mythology in general -- or, more importantly, how people with a mythology experience and regard that mythology.

Moreover, Veyne discusses how the Greeks viewed history, and what they thought of as "true."

This is not just a question of quaint superstitions and myths held by the ancients. Postmodern critical theory has forced us to reassess the idea of our own immutable "facts" in many fields.

Veyne explains what he calls the "constitutive imagination," in effect, the ability to believe in two things that we would now consider incompatible. 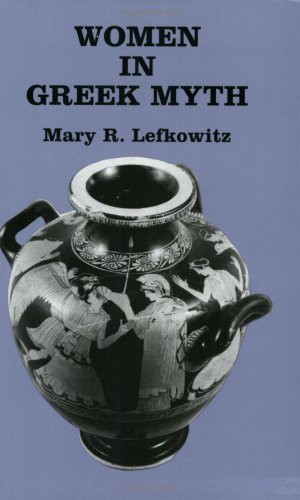 For feminist scholarship in classics, this was a watershed book, although it is not without its detractors.

It is a very nuanced reading of Greek mythology, not simply seizing upon myth after myth as evidence of the patriarchy and repression, but rather, looking for the roles that women play in Greek mythology, the powers they have and the limitations they face.

Some readers have complained that Lefkowitz tends to treat gods and mythical figures as more like real-life people than mythic archetypes. However, ancient Greeks tend to describe their gods in very human terms, too.

This landmark work of feminist scholarship helps us understand Greek mythology and the Greeks from a fresh but not shallow perspective.

The Greeks and the Irrational

In part, Paul Veyne was responding to E.R. Dodd's famous work, The Greeks and the Irrational.

Dodds, in turn, was turning the field of classics on its head. It had long been traditional to praise the Greeks above all for their rationalism, their moderation.

Dodds pointed out how much of this was an idealized distortion. He explores the complex tug-of-war between rationalism and its alternatives in Greek society, starting with mythical examples in Homer and tracing shifts and changes in Greek culture and attitudes down into the Hellenistic period.

This books is dated, but still provocative and deeply insightful. Again, it's a must-read for any classics or myth major at some point.

Odysseus: Escaping Poseidon's Curse [A Greek Legend] (Graphic Myths and Legends)
One of a number of "Graphic Myths & Legends" graphic novels covering Greek, Egyptian or Norse myths. Many are available in Kindle format as well as paperback.
Buy Now

Here's an important tip for high school / middle school teachers and homeschoolers: graphic novels and comics are great teaching aids, useful for hooking kids on Greek mythology using a modern storytelling medium. (I'm not ashamed to admit that my first exposure to Greek philosophers was through the hilariously intelligent Epicurus the Sage graphic novel).

The Graphic Myths and Legends series presents Greek mythology's most well-known heroes, and they also cover some major Norse and Egyptian myths.

Obviously, mythology graphic novels aren't going to be quite as true-to-ancient-sources as the scholarly books I covered above. But remember, ancient and medieval writers were always retelling and adapting old myths and new ways so that their audiences could identify with them.

While well-researched, Connor's books include some modern gender stereotypes (for both genders), "translating" ancient Greek sexism into a 21st century format. Again, this can be turned into a teachable lesson, illustrating how mythology is a powerful tool for reinforcing assumptions and stereotypes.

Tip: sometimes these books throw in a few original twists on Greek myths, (See the "kraken" cover art on the Perseus installment of Graphic Myths & Legends). Ask students to identify these modern embellishments and discuss how and why myths are adapted, re-imagined, and reused over the centuries.