Top 10 Activities With The Color Blue

Christine, wife, mother, homemaker for over 40 years, has an NVQ3 in Childcare & Education, a diploma in Naturopathic Nutrition and TEFL.

A Rainbow Lesson Plan in the Color Blue

Welcome to a Free Lesson Plan that teaches your group of children not only about the color blue, but in the process how to not give up, why we can trust, how to relax, have fun, be creative and much more about our wonderful world. Blue is a natural color that speaks to us of the outdoors, the sky and the sea. These elements give us a calming feeling and thoughts of lazy Summer days. Water speaks to us of healing and refreshing, whilst the expanse of blue sky can give us a sense of freedom and being a part of the wider world. Is is any wonder that it is most people's favorite color? Decorate your room in your theme color to set the mood, with balloons, cushions, streamers and banners, all in the color blue of course.

Activity 1- Balloon Games As They Arrive

Encouraging the children to participate

Allow the children to play with the balloons as they arrive. You could get them to hop from one end of the room to the other with a balloon between their legs or hit them over an obstacle, such as a line of chairs or into a goal.

When they have had fun playing with them, an adult could hang them up out of the way of distraction and to decorate the room, whilst the next activity begins. 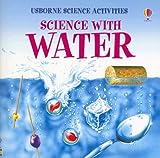 Science With Water (Science Activities)
Discover the properties and wonders of water with this book, which guides you through simple water experiements to prove the theories. My kids used to love looking at this and trying out the experiments to satisfy their curiosity! Water covers 71% of our earth's surface, so it's worth exploring it! If you have several adults, each could supervise a different experiment through which the children can rotate. Watch their eyes get bigger as they see what can be done with water. Look at a simple bubble of air in a bottle of water and watch how it moves as you tip the bottle, or have a variety of objects and test which ones float. See further ideas in this book for young children.
Buy Now

Sit down and make a list together of blue things on a board: e.g. sky, water, eyes, cold....

Discuss how we use water. Show props to encourage suggestions such as a (blue) toothbrush, watering can, sponge, beaker, soap etc. These items could be used for the following activity.

Activity 5- Song Time With The Parachute -

Add your own Circle Songs to these:

1. Begin the song time with a simple song about the blue sea, where everyone can hold onto the edge of the parachute and make the waves of the sea. You can make up lots of verses to this song:

A sailor went to sea, sea, sea to see what he could see, see, see

Well all that he could see, see, see

Was- the bottom of /was lots of fishes in(you could throw some plastic fishes on top of the parachute)/were boats sailing on (throw on a boat or two) were birds bobbing on (throw on toy birds or ducks) the deep blue sea, sea, sea.

He's got the whole world in his hands (x4)

3. For this song you will need some holding the edge of the parachute, whilst others get ready to run under as you invite them onto the ship!:

We're going this way, that way, forwards, backwards over the Irish Sea (move the parachute appropriately at this stage for each verse)

With a bottle of pop to fill us up- That's the life for me.

When I was five I learned to dive (at this point the parachute is dropped onto the floor as those underneath run out and everyone jumps on top) SPLASH...... 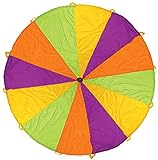 Pacific Play Tents 18000 Playchute 10' Parachute - Multicolor
A great prop for every group, encouraging children to be active during song time, dancing and even listening to stories, bringing everyone together for a common focus. I have used them over many years, in Parents and Toddler Groups (parents participate by holding the parachute, whilst kids run underneath) and in nurseries where I have worked.
Buy Now

Peter was a fisherman and he and his friends had been out fishing all night and were really tired and fed up. They hadn't caught anything. Now there would be nothing for breakfast! The sea was gently swelling up and down as they sat in their boat rubbing their heads (sway the parachute around like gentle rolling of the sea).

Suddenly Jesus appeared and asked what was wrong. When they told him he suggested they try again, but this time put nets over the other side of the boat. Peter and his friends were unsure and didn't really think it would make any difference. Didn't Jesus hear them when they said they'd been trying all night? Why should it work now? Anyway, Jesus wasn't much impressed with their lack of faith in him. He only wanted to show them what could happen when they trusted him. So they decided to have this one last try to let the nets over again, but on the other side of the boat. (throw a number of plain, blue card fish shapes on top of the parachute)

Wow! When they tried to pull the fishing nets back in they were so heavy with fish that they couldn't do it alone (pull the parachute to one side and fold up). They had to get their friends from the other boat to help them. They were well impressed with Jesus and were sorry that they hadn't believed him at the beginning. They certainly had a big, tasty breakfast when they reached the shore. (collect up the fish for next activity)

The sky's the limit!

Here is a chance to art & craft into some messy creativity!

No blue lesson plan would be complete without some fun water play!

Offer a selection of water toys and decide whether you will organise this on a small scale indoors, around a water play table (where they stay relatively dry by wearing plastic aprons) or outdoors. 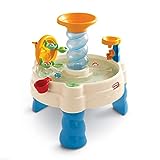 Little Tikes Spiralin' Seas Waterpark Play Table, Multicolor
Ideal for using indoors or it can be carried outdoors in good weather. In my experience, kids love this and it is there for all seasons and weather! So many learning opportunities through pouring, sieving, submerging,floating and lots more.
Buy Now

Activity 10- A relaxing end to your lesson plan

Lying quietly on the floor, relaxing each part of their body as they hear the sound of the sea and speaking calmly and softly to encourage stillness.

Recap briefly on your main points from the session, speaking in short phrases with short pauses between each.

After a few minutes, reverse the initial relaxing of their bodies by telling them to feel and stretch each part of their body until ready to slowly sit up and then stand. A final stretch of their arms above their heads completes this relaxation.

The amount of time spent on this will depend upon the age of the children, but by creating a calm environment without any distractions, they should be able to benefit from this activity for 5-10 minutes.

Relax To The Sound Of Ocean Waves

Provide blue food for a snack

such as blueberries, blue grapes, plums and blue cheese.