I've loved ancient Egypt ever since my childhood days of hanging around the Egyptian floors of the Walters Art Gallery and the University of Pennsylvania Museum. Tales of Ancient Egypt, a children's collection of Egyptian myths by Roger Lancelyn Green, was one of my favorite books at age seven. By junior high I was chewing on Budge's antiquated translation of the The Egyptian Book of the Dead. While working on an MA in Mythological Studies, I've had a chance to review more scholarly and recent books on Egyptian myths and legends.

So let me thumb through my library of books on ancient Egypt and give my recommendations for the best books on Egyptian mythology. Some of these are great for the general public, kids and/or students, while others are scholarly resources.

Unfortunately, my top recommendation, Veronica Ion's Egyptian Mythology is out of print. Fortunately, you can purchase it used on Amazon.

This well-organized 140-page volume is divided in three parts: The Creation of the World (variant creation myths according to different major cults), Divinities (a comprehensive guide to the Egyptian pantheon including major and minor gods), and Life After Death (the Osiris cult and afterlife beliefs). An index, further reading list, and compact timeline of ancient Egypt make this book a must-have for any student or Egypt enthusiast. Hundreds of black and white illustrations drawn from ancient art show pictures of nearly every Egyptian god.

As an alternative to Veronica Ion's Egyptian Mythology, Hart's compact 80-page handbook (British Museum and University of TX Press 1990) packs a great deal of information into a small space. It covers the variant creation myths, myths of Osiris and Set, of Isis and Horus, folktales, the journey through the underworld, and more using quotes from original sources. While it doesn't have the space to present Ion's in-depth coverage of the Egyptian pantheon, it's a fairly good reference with helpful index, charts, maps and black & white photos of Egyptian art.

Recommended for: Kids, fans of Egypt

Here's another out-of-print treasure you can find on Amazon from used booksellers. 128 pages, it's officially written for ages 9-12, but I was delighted to receive this book as an adult. Artists David O'Connor and John Sibbick bring ancient Egypt magically to life with black-and-white illustrations and full-color, full-page plates in a modern style based on Egyptian art and motifs. Geraldine Harris turns extant Egyptian myths into 24 well-told tales that are accessible to modern readers. Illustrated sections on hieroglyphs, symbols and god-names plus bite-sized notes on Egypt's history provide context and explain the Egyptian civilization for general readers. This is a magical book. 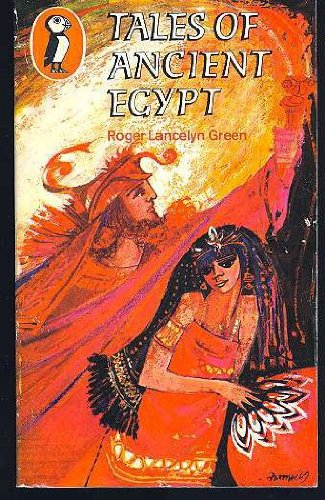 Recommended for: Kids, fans of Egypt

Roger Lancelyn Green is the Edith Hamilton of Egyptian mythology. His Tales of Ancient Egypt kept my head full of wonder on many long road trips as a child. I'm not sure if the current edition has the black-and-white illustrations I remember, but Green retells twelve classic stories from Egyptian mythology in a lively and engaging style that doesn't talk down to kids, while deftly side-stepping racy bits. 256 pages, officially for age 9-12, this was my favorite book when I was 7. (Many of these twelve stories are also in Harris' Gods & Pharaohs, but they are different retellings which feel to me like they're aimed at age 11-14.)

NOTE: I have linked to the Amazon listing for the old, illustrated paperback edition that I fell in love with at age 5. There is a new edition on Amazon -- search for Roger Lacelyn Green "Egypt" -- with a new preface by Michael Rosen, but I don't think it retains Heather Copley's illustrations (see the cover art above for an example). Either way, it's a Puffin Book classic.

Egyptian Mythology: A Guide to the Gods, Goddesses, and Traditions of Ancient Egypt
Buy Now

Someone has finally written a suitable replacement for Veronica Ion's Egyptian Mythology. College professors, here's your textbook. College students, here's your sourcebook. (And I've been enjoying reading it for fun.)

This 214-page volume is divided into three parts: 45 pages discussing Egyptian history and literary sources for mythology, 40 pages on a "Mythic Timeline" stitching together most of the major stories of the gods, a hundred-page alphabetical "Deities, Themes and Concepts" section that comprises the bulk of the work, and a 40-page section which will be very valuable for students including online and print resources on Egyptian myth, a Glossary of names and terms, a bibliography of primary sources, and index.

The one thing it skimps on is narrative myths: it covers most of the surviving ones (which are admittedly few), but the bulk of this book is the mini-encyclopedia on Egyptian deities and other figures and concepts of mythology.

The Egyptian Book of the Dead: The Book of Going Forth by Day - The Complete Papyrus of Ani Featuring Integrated Text and Full-Color Images
Buy Now

The Egyptian Book of the Dead

Raymond O. Faulkner's translation of The Egyptian Book of the Dead is a museum-quality presentation of the "Papyrus of Ani," a lushly-illustrated New Kingdom edition of the classic Egyptian text buried with the dead as a guidebook to help them reach the blessed afterlife.

This coffee table book includes a brief foreword orienting the general public about Egypt's history, culture, and beliefs about the afterlife. The bulk of the book is high-quality, large color plates of Ani's papyrus with a translation below. Following the translation is a commentary and a glossary of names.

Get this version or another modern edition of the Egyptian Book of the Dead, NOT the popular Dover translation by E.A. Wallis Budge, which was published in 1895.* 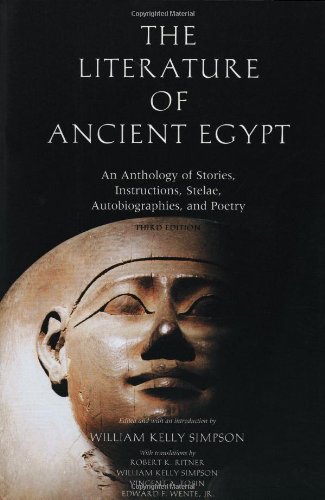 The Literature of Ancient Egypt: An Anthology of Stories, Instructions, Stelae, Autobiographies, and Poetry
Buy Now

The Literature of Ancient Egypt is an extensive 600-page anthology of translations covering all the major texts, not only including Egyptian mythology, but also books of maxims, poetry, religious texts and historical documents. Each text includes a brief introduction and sparse notes, and there is a valuable 70-page bibliography of almost-current scholarship in Egyptian literature and manuscripts.

Dover publishes many popular books by EA Wallis Budge, a 19th century Egyptologist working shortly after hieroglyphs were deciphered. Much of his work holds up, but don't rely on his information. Since Budge, countless papyri have been discovered, many sites have been excavated, and a century and a half of research by hundreds of Egyptologists have corrected and superseded his pioneering work.

If you know of any students of ancient Egypt, please share this page.