Are you looking for fun worksheets, books, video clips, and activity ideas for teaching and/or learning about California? Included are links to wonderful worksheets, book suggestions for children, YouTube videos, points of interest, and more -- all related to the state of California! These are the resources we found to be most helpful when studying California as part of a larger unit study on the 50 states of the United States. You can find the links for my pages for each of the 50 states at Teaching the 50 States of America .

I Haven't Been to California yet. Have You?

I Haven't Been to California yet. Have You?

Our Favorite Free Worksheets and Lapbook Pages on California

We found these to be helpful when creating a notebook and lapbook on California.

Nine for California Lapbook offers free lapbook pages and activity ideas for Nine for California by Sonia Levitin. At this website, homeschoolshare.com, you will also find great free lapbooks for other picture books related to California such as Humphrey the Lost Whale by Richard Hall, A Day's Work by Eve Bunting, and Ten Mile Day And The Building of The Transcontinental Railroad by Mary Ann Fraser.

Our Favorite Children's Books on California

Our Favorite Picture Book on California

G is for Golden: A California Alphabet
This is my favorite series on individual states. Each page has a simple rhyme concerning the word starts with that letter and then includes a bit more about that particular regional animal, location, etc. It provides a wonderful overview of what makes each state unique. Both modern and historical aspects of the state are includes. Plus, the illustrations are beautiful!
Buy Now

Golden Numbers: A California Number Book (America by the Numbers) by David Domeniconi is similar to the above book but it uses numbers rather than letters to go through the main points of interest in the state.

Song of the Swallows by Leo Politi is the story of a boy who discusses with a bell-ringer at a California mission in California about the swallows that return each year. It is a great way to introduce the history of missions and Native American history! This won a Caldecott Medal.

Juanita by Leo Politi is about a four year old girl living in downtown Los Angeles during the 1940s. The book covers what her family does to celebrate her birthday and Easter, making this an excellent book to show the Mexican traditions for birthdays and Catholic Easter celebrations in Los Angeles' Latino community. This won a Caldecott Honor Award.

Our California by Pam Munoz Ryan contains very colorful illustrations to accompany as assortment of fun poems that describe the state's major cities and regions.

Pedro: The Angel of Olvera Street by Leo Politi tells the story of a young boy who leads the Christmas posada (Nativity procession) in Los Angeles during the 1940s, making this an excellent book to show the historic Catholic Christmas traditions in Los Angeles' Latino community. This won a Caldecott Honor Award.

Maxi, the Star by Debra Barracca is a cute story about a dog who travels across the United States in order to film a movie in Hollywood. It shows the sites they see as they travel across America and then the glam of Hollywood. It is a fun, simple story and would be best for preschoolers or early elementary aged children.

Calling the Doves/El canto de las palomas by Juan Felipe Herrera is a personal narrative, written in both English and Spanish, about the author's early life as he grew up in a hardworking and loving migrant farm-worker family in California.

Mother Goose in California by Doug Hansen takes Mother Goose nursery rhymes and places them in various locations across the state of California. It is a cute and clever way to learn about some of the locations, flora, and fauna of the state!

How to Draw California's Sights and Symbols (Kid's Guide to Drawing America) by Jennifer Quasha is part of a great series that combines state geography with art. Each page contains something about the state (a state artist, the state flag, bird, tree, capitol building, areas of interest, and animals.) A photograph will be included along with a brief explanation about that item. Then the page opposite of that includes step by step directions on how to draw that symbol or site. Even my 6 year old is able to follow the drawing directions, and I've been amazed at how well my 9 year old has been drawing each of the state flags as he follows the instructions in the book.

Also look for Earthquake by Milly Lee and Smoky Night by Eve Bunting.

Our Favorite Board Book for Babies, Toddlers, and Preschoolers 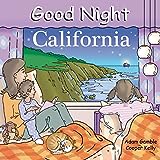 Good Night California
This cute 26 page board book goes through the main sites of California. It has short text and nice illustrations that appeal to even the youngest of listeners.
Buy Now

More Great Board Books for Babies and Toddlers

My toddler loved these board books that have illustrations that appeal to her age and just the right amount of text to keep her attention while still providing some information about California. Also look for Good Night San Francisco by Adam Gamble, Good Night Los Angeles by Adam Gamble, 123 California (Cool Counting Books) by Puck!, and Little California (Little State) by Helen Foster James, which includes the state symbols (animals, trees, flowers, etc.) in a riddle board book with rhymes.

Esperanza Rising (Scholastic Gold)
This book takes place in the 1930's Depression Era and follows Esperanza, a wealthy Mexican teenager, who is forced to leave her home and head to California with her mother after her father is killed and her uncle burns down their home. In California they live in complete poverty as they work in a migrant camp. Many issues (such as racial discrimination), political issues (such as social reform), and historic periods (such as the Dust Bowl) are addressed in this book. Ultimately, however, the book leaves you with a sense of hope.
Buy Now

Leo Politi: Artist of the Angels by Ann Stalcup (104 pages) is the biography of the children's author and illustrator of the California-based Leo Politi who wrote so many award winning children's books about the life of Latino children in California in the 1940s and 1950s.

Island of the Blue Dolphins by Scott O'Dell (192 pages) is the story of a young Native American woman who is stranded on an island for many years and must learn to survive. It is based on the story of a real woman who was discovered living on San Nicolas Island off the coast of California all by herself.

Al Capone Does My Shirts by Gennifer Choldenko (240 pages) is about a 12 year old boy who moves with his family to Alcatraz in 1935 after his father gets a jobs as a prison guard. His autistic sister, Natalie, attends a special school in San Francisco.

California's State Flag is based on historic flags that have flown over California. The red star points back to the California Lone Star Flag. The bear was added in the late 1800's to symbolize strength and unyielding resistance.

Good video showing General Sherman, one of the largest trees in the world

What Makes This State Unique: Grapes

What Makes This State Unique: California's Food and Agriculture

We love eating California produce! California leads the nation in food and agriculture, growing more than half of America's fruits, vegetables and nuts. It is the top producing state in milk, artichokes, turkeys, and avocados.

This is San Francisco [A Children's Classic]
This is a reprint of a vintage picture book, originally written in the early 1960's, that describes San Francisco's main attractions including the cable cars, Chinatown, Golden Gate Bridge, etc.
Buy Now

More of Our Favorite Picture Books on San Franscisco

Larry Gets Lost in San Francisco by Michael Mullin gives you a tour of the city as Larry wanders away from his owners and explores Sand Franscisco. He of course visits the main sites, the Golden Gate Bridge, Alcatraz, Ghirardelli Square, Chinatown, Mission Dolores, etc. A sidebar explaining the significance of each location is also included.

City by the Bay: A Magical Journey Around San Francisco by Tricia Brown includes bright illustrations to accompany the text that describes the main landmarks of the city and provides a bit of history about each location.

Maybelle the Cable Car by Virginia Lee Burton is a classic story told from the perspective of a cable car running in San Francisco. It is based on actual historic events when San Francisco's citizens fought to keep the city's cable cars running.

The Cable Car and the Dragon by Herb Caen is about a tired cable car who befriends a dragon after finding himself in a Chinese New year parade.

In 1848 gold was found at Sutter's Mill. News of the gold spread rapidly, and soon people from around the world were flocking to California to seek their fortune in gold. These people became known as "forty-niners," referring to the year 1849. On account of the gold boom, San Francisco became a major city, California became a state, steamships became a popular form of transportation, railroads were built to California, and Native Americans were removed from their lands.

My Favorite Picture Book on the California Gold Rush

Gold Fever
This was my favorite book on California's Gold Rush. The book uses actual accounts written by those who were at the Gold Rush. They are pieced together well and quite interesting. The illustrations are wonderful. Even my 4 year old enjoyed this book.
Buy Now

My Sons' Favorite Picture Book on the California Gold Rush

John Sutter and the California Gold Rush (Graphic History) by Matt Doeden - My boys (ages 6 and 9) love these books that are illustrated to look like comic books. I love that they are packed with historically accurate information. We read a number of books on the California Gold Rush, and these two were definitely our favorites. My boys loved reading them over and over again. They learned quite a bit and loved the illustrations.

Death Valley is the hottest, lowest, and driest place in America. Temperatures have reached 134°F. It is less than 100 miles from the highest point in the contiguous US, Mount Whitney.

Death Valley: A Day in the Desert (A Holiday House Reader, Level 2)
This does a great job of introducing the flora and fauna of Death Valley and uses illustrations that are appealing even to younger children.
Buy Now

Man vs. Wild in Sierra Nevada does a wonderful job of showing the flora and fauna of the area

My children were also fascinated by the La Brea Tar Pats and would love to visit them someday. For now, we will watch these great video clips.

Where is Sacramento, the capital of California? 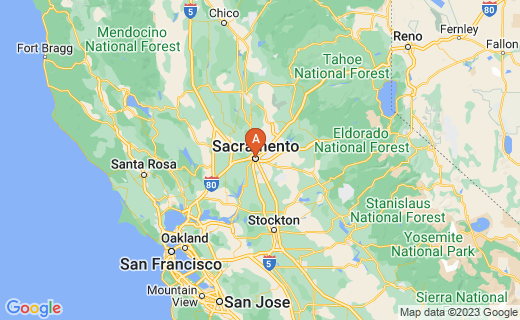