How to start an Elementary School Chess Club

This lens is devoted to information and resources for anyone interested in starting an elementary school chess club.

My son (3rd grade) loves to play chess and has been playing with his Dad for several years.  One day I said "Do you think we should have a chess club at your school?"  His answer was an enthusiastic YES.

I had no clue what I was doing, but muddled my way through to start a chess club at his elementary school. (I'm not even a good chess player!)  I was pleased and surprised at the enthusiastic response the chess club received.

This lens is (as all lenses are) a work in progress and will grow as I find more relevant information. If you like the information you've found here, please rate this lens by clicking on one of the 5 stars beneath the lens title. Thank you!

These are sites that I found useful when planning how to run the chess club and how to teach chess to beginners. There are also several organizations that (for a fee)come to your school and run a chess "learning" club.

Benefits of Chess in Education

We started by asking the school if we could use a classroom after school hours so that the kids could just stay after school to play and have a parent pick them up.

We opened the club to 3rd and 4th graders. There was a very enthuiastic response and several 1st and 2nd graders asked to join. Next year we'll open it up to all grades!

We asked the PTA to buy the chess boards (and also asked families to donate some if they could.) We negotiated a good price with a local toy store.

Basically, I gave the kids "play sheets" with the names of the other students in the club and let them choose their own partners--marking off for each game whether it was a win/lose/draw.

Most of the children knew how to play, but I had some handouts of how the pieces move to give anyone who needed it.

Our goals were to:

Learn to play a better game of chess

The Kids' Book of Chess and Chess Set
We consulted this book several times during chess club for rules about how and when you can Castle and for a really good starting game one of our players used to great advantage. We dubbed it "checkmate in 4 moves."
Buy Now 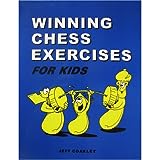 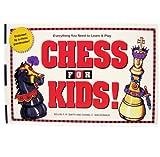 Chess For Kids Everything You need to Learn & Play
Buy Now