The Congo River: Facts and History

Where is the Congo River?

The Congo River winds through millenia of myth, tragedy, triumph and history in the making.

Several countries in West Central Africa are along the path of at least a small part of the river. Tributaries reach into Cameroon, Angola, Gabon, Burundi, Zambia, Rwanda and Tanzania. The Central African Republic, The Democratic Republic of the Congo and the Republic of the Congo are also hosts to major portions of the Congo River. Congo River maps allow you to trace the various routes that the river takes, though some areas are not easily navigable, if at all.

Congo River Sources -- The Congo River has a calm start in the mountains and highland savannas of the East African Rift, the waters providing one source. The Lualaba River, fed by Lakes Tanganyika and Mweru, slips into the Congo beyond Boyoma Falls and is considered the main headstream of the river.

"Gates of Hell" -- Though not an official designation, this affectionate name has been applied to the point where the river speeds up, widens and roils in rapids through 75 miles of canyon.

The river spends into the ocean at Sharks Point in Angola and Banana Point in Kinshasha, Congo. Between its beginning and its end are the navigable areas, rapids, falls, marshlands, the Devil's Cauldron whirlpool, swamps and cataracts that make up the magic and mystery that is the Congo River.

Lakes & Rivers
This is a really great video that you can watch on Amazon for free as a Prime member or just for 1.99 if you are not. Part of a series on Africa, it shows the influence of the Congo River on surrounding areas.
Buy Now

Facts About the Congo River

Each major river has its own distinctions, whether it is their contribution to the economy of an area, or to the cultures that surround the waters. Though some impact measurements depend on anecdotal evidence and observation, precise science and engineering has settled some questions.

Facing the Congo: A Modern-Day Journey into the Heart of Darkness

Facing the Congo: A Modern-Day Journey into the Heart of Darkness
Journalist Jeffrey Taylor, at odds with his life and work, decided to leave behind his life in Moscow to recreate British explorer Henry Stanley's journey down the Congo River in a small dugout canoe. He packed medicine, food and had a guide, but found that the maps and travel information didn't come close to understanding the reality that is the Congo. This book details Tayler's trip through this rough country and his encounters with nature, villagers, officials and soldiers while taking in the immense beauty of the area. He also relates his own personal development as he experienced and explored the world around him. An excellent read.
Buy Now

The lands surrounding the Congo River are witnesses to thousands of years of history. Long before European exploration and exploitation, the Kingdom of Kongo and its Bantu people inhabited the area. The kingdom stretched through parts of what are present-day Angola, Republic of Congo, and the Democratic Republic of Congo, its influence spreading even beyond its borders. The river takes its name from the kingdom.

The first European to navigate the waters of the Congo River was Portuguese explorer, Diago Cao, in 1483. Soon following him were Roman Catholic priests and soldiers, who set about converting the population to Christianity, some forms of which incorporated the older religions followed by the native population.

Within the next 50 years, the area of the Congo became a major source of slave labor, with the Portuguese and other European

countries vying for control and profit.

Since that time, and likely before, the areas surrounding the Congo River have seen periods of great tragedy and abominable oppression. It has also seen periods of rich community, enduring principles and family life, and an explosion of culture and continuity. 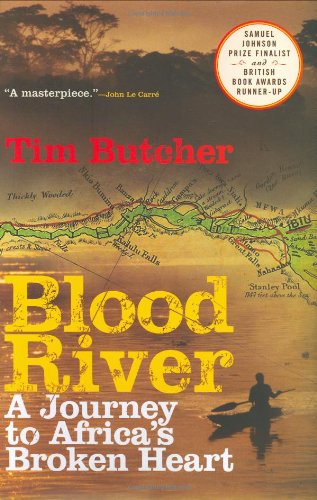 Blood River: A Journey to Africa's Broken Heart
Published to rave reviews in the United Kingdom and named a Richard & Judy Book Club selection—the only work of nonfiction on the 2008 list—Blood River is the harrowing and audacious story of Tim Butcher's journey in the Congo and his retracing of renowned explorer H. M. Stanley's famous 1874 expedition in which he mapped the Congo River.
Buy Now

The rainforest of the Congo River is second, in size, only to that of the Amazon. This is the area that Joseph Conrad termed "The Heart of Darkness", an almost impenetrable forest filled with a vast number of animals, African Pygmy tribes and rumors of cannibalism. Many misunderstandings and erroneous conclusions perpetrated by early European observers are still being corrected to this day.

The rainforest of the Congo River is, like many rainforests, a major source of the planet's oxygen and a host to a wide variety of animal, plant and insect life. Lowland gorillas are one of the more famous inhabitants of the rainforest; elephants and hippopotamus also make their home there among the 10,000 other animal species. Six countries share the the Congo River Basin in which the rainforest resides.

Legends and Myths of the Congo River

Very few rivers are without their own myths and legends, and certainly no large ones. The Congo River, with its entrances into a vast number of communities of different cultures and beliefs is no different.

For instance, you'd expect the Congo River rainforest to engender stories of amazing creatures and deities, and it does. Except, for some, the forest itself is the deity. It provides shelter, food and water, and in return believers protect and revere its plants, trees and life.

That is just one of the myths and legends that surround one of the greatest, most magical and only recently understood waterways in the world: the Congo River.

The Congo River - Artery of the Forest

Before you travel to this part of the world, make sure to check to see if you need any vaccines or medications, special Visas or paperwork and whether you can drink the water.

Have you visited the Congo River?