Elyn lived in China with her family for 30 years, soaking up the history and culture, having fun, and making many friends.

One of China's oldest Imperial Pets

Did you know that the Chinese have been raising crickets as pets for thousands of years? Have you seen the movie "The Last Emperor"? He pulls out a cricket cage at the end of the movie... remember? Emperors fell in love with crickets, had cricket fighting competitions, wrote poetry about them, and kept them in small cages in their pocket so the crickets would never get cold in the frosty Autumn weather. I have friends who still keep crickets in their pockets. Their favorite? The dear little "Golden Bell,"

Here you will discover pictures, information about crickets, and even cricket poetry on this page. Have fun!

(All photos are original, copyright Elyn MacInnis. Please use them only with attribution.)

Where do you buy crickets and katydids? - At the cricket market of course!

Cricket markets in most bigger cities and towns carry a wide variety of crickets and have shops as well as cricket and katydid sellers with their crickets in various containers on tarps on the ground.

Usually there are other animals for sale there too - the man in the photo with the round, blue cloth covered cage has a bird inside. Older men love to raise birds and take them for walks in the morning, and this man has decided to walk his bird through the market. But the market has dozens of people who come from the countryside to sell their crickets and katydids in the fall. They squat down with their tarps and small stools and wait for people to come buy their crickets. The sellers in the photo are selling the larger katydids. Watch out if you catch one - they bite!

Inside the small jars you will find the spirited Beijing fighting cricket. I have an elderly friend who told me that he used to take his cricket to school. In those days, the girls often brought silk worms to school, and the boys would bring their crickets. But no pets in the classrooms! They were all lined up in their small jars and left by the door until recess.

Crickets are the sign of autumn, a melancholy time in China

A poem about a naughty cricket who kept the family from sleeping!

Listen to the Crickets

and is one of the most famous poets in China.

Afraid that sad people will sleep a while,

The "creak creak" moves to the front of the bed.

Every culture is different. I never thought sad thoughts in autumn. I love the return of cooler weather, and the crickets are a reminder that the intense heat of the summer is over.

Most people consider the Jin Lingzi, the Golden Bell cricket to have the finest voice. This picture is of the Golden Bell I kept last fall, who sang for quite a while even after the weather turned cold. You can see how small he is by comparing him to the toothpick. My friend keeps a Golden Bell in his pocket all fall.

Since Chinese people have been raising crickets for more than a thousand years, they have developed what they call "Cricket Culture." Some people love cricket fighting, but originally crickets were raised because they were - well - just simply charming. Artists have painted many paintings, created cricket calligraphy, written poetry, and spent time making beautiful cricket cages and various tools to make life easier.

Most singing crickets in the market are found in a cardboard container with a glass lid and a small plastic stopper/feeder plug to put food into. These crickets are usually shifted to a plastic or bamboo rectangular shaped container with a sliding plexiglass top (so you can see the cricket) and a sliding bottom that can be removed for cleaning. The smaller sides will have a breathing/sound hole and the other side will have a plug that can be removed and have food inserted in it. There are metal cases to keep crickets in during the winter, especially for people who like to keep them in their pockets in the colder weather.

For a number of years the Golden Bells I bought in Nanjing came in discarded bottles used for injections with a wire net top that was easy to remove. This isn't as nice as a fancy wooden cricket box, but it was really practical.

On top of the cricket cages in the pink tray is what amounts to a cricket elevator, or cricket mover, and what I call an encourager. If a cricket gets loose, you can put the "elevator" in from of him with the open end showing. Crickets love dark holes, so most crickets will walk right into the little cylinder. But if the cricket needs encouragement, you can use the fluffy cotton ball on the wooden stick to give him some encouragement to get into the elevator. Then you can lift him up and carry him to his cage in safety.

There are cricket dishes for food and water in the back of the photo, and eyedroppers for adding water to their pots on the back left. At the front of the photo next to the pink tub, which is full of crickets, mostly the singing ones, you can see tall cricket catching nets.

Crickets hide out in dark places, and don't mind the dark. Their cages come in all sizes and kinds, and are usually made of clay with a floor that has pounded sand with some Chinese medicine added so it doesn't mold. In the Beijing area, where this photo was taken, you can find all sorts of houses, including ones that count as "villas" and have miniature running water fountains. Pretty fancy!

Cricket cages that are smaller

Cricket cages - for your own pet cricket! 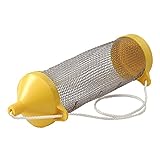 Frabill Cricket Cage Tubular W/Funnel
Tube style cages have been in use for more than 1000 years. In China they are made of bamboo, wood, ivory, and often have removable glass lids. But you probably won't be able to find a Chinese one, so this one is a good substitute.
Buy Now

Fighting crickets or singing crickets? Which do you like? There are special cages for each kind, and the ones for singing crickets have more open spaces and sounding boards built in, so the cricket's song will be magnified. Some have a magnifying glass on the top so you can see the little songster singing more clearly. No matter what cricket you have, there is a cage for them. The front one on the left is a "four room apartment," the one on the right is a magnifying cage for a singing cricket, and the back one is given as a gift. Think the shape is strange? It's the shape of a coffin, and is a pun on the words for "get rich," something every cricket seller would like to do.

Crickets and Katydids are very different

Watch out - katydids are not crickets and they pinch hard!

You will hear quite a racket in the market. Not only are there crickets, but there are katydids too, and they make so much noise it can be deafening. Some people really love the sound of the katydids, but I have always found it too noisy. And I don't like the fact that katydids pinch you really hard, and my friend tells me they can even pinch you so hard you bleed. But katydids have cool houses made of gourds, and some are even decorated with pictures that are added by burning the picture into the gourd with a hot piece of metal. I would rather collect the gourds as art than have to cope with a katydid!

One last word about katydids

One of the most practical and popular of materials to make containers for katydids is the gourd. In popular stories and legends Chinese fairies and immortals kept their “Elixir of Immortality” in gourds. The gourd is strong and keeps the right amount of moisture. Some farmers put immature gourds into a mold, and the gourds grow up to fit the mold, which has different symbols, animals, famous historical figures or beautiful ladies impressed on the mold. Artists also use a burning technique with a metal needle to burn drawings onto the gourd. The gourd in this picture was made by growing the gourd inside a mold, so that the picture was imprinted on the gourd as it grew.

What do you feed a singing cricket?

Crickets eat almost anything. They like apple, all members of the squash family, cucumbers, sweet potato, and also eat chicken feed, and specially prepared cricket feed that you can buy in the markets here, which has exotic ingredients like snake meat, shrimp powder and ground bones. They also eat old cloth, leather, and paper, but it wouldn't be good to feed them that. My Golden Bells love apple best of all. It has lots of water content, and you don't have to add water to their cages if you give them apple.

The picture is of some different sorts of cricket cages. The one on the front right is called a "four room apartment." The front right cage is a magnifying cage to keep tiny crickets in like the Golden Bell. The funny looking wooden box in the back is a replica of a Chinese coffin. Yes, you read that right. A coffin. Why? It is a pun on getting rich, and everyone would like to be rich - so even though most people don't want to speak about death, they are happy to have the gift of a cricket in a small coffin which is a blessing and wish that they will be wealthy. The cages in the back with bars are for katydids.

How do crickets sing?

Do crickets sing with their mouths?

No - crickets don't sing with their mouths. They sing by rubbing their wings together, that makes a sound similar to the sound humans can make when they run their fingernail along a comb.

Cricket wings have one edge with teeth like a "comb" and one with a "bow". The hard edge rubbing against the teeth of the other wing makes the chirping sound. Crickets are "right winged" and katydids are "left winged." The common field cricket has 142 teeth, and in its normal call uses 67 of the teeth to make its sound, which it produces as a triple note at 4,900 hz, which is higher than the highest octave on the piano. When it is courting a female, it uses 92 of the teeth as a continuous chirp at the same frequency. They can sing as high as 20,000 cycles per second, which is a sound we humans cannot hear.

You have caught a cricket? This book will help you figure out what sort of cricket you have found.

Field Guide to Grasshoppers, Katydids, and Crickets of the United States
Some people don't care what kind of cricket they have bought or found, but I have always been very happy to know the family, genus, and species. This book helps you get more specific about the kind of cricket you have.
Buy Now

You will find lots of good information at these links.

Cricket lovers unite! - Do you have any experience with crickets? Would you like to try raising one?