Lonomia Obliqua: a Stinging Caterpillar That Can Kill You

Authoritative and detailed guides to the things you're curious about.

Stinging caterpillars are not uncommon, but one species can sting so severely that people have died. This is the larva of Lonomia obliqua, a species of moth that lives in South America. It eats leaves and turns into a pretty brown moth. And it can kill you.

The spines that cover the caterpillar's body contain a devastating toxin that can cause internal bleeding, including bleeding into the brain. All you have to do to be stung by this deadly caterpillar is to come into contact with the spines on the surface of its body. The unfortunate people who accidentally come into contact with this creature may not even notice the sting at first, but the symptoms quickly progress, and within a few days the victim may lapse into a coma and eventually die.

More About This Deadly Caterpillar

This caterpillar has killed literally hundreds of people. Read on for more information about caterpillars in the Lonomia genus.

This is another view of the spiny Lonomia moth caterpillar. It's colorization gives it excellent camouflage when it gathers together on the trunks of trees. This is a problem: when someone working outside stops to rest, they might lean on a tree covered with resting Lonomia obliqua caterpillars. The resulting stings from these caterpillars can be enough to kill, especially when the victim is a farmer working in rural areas far from modern medical centers. If untreated for a day or two, the bleeding that is ultimately fatal may be too advanced for the victim to be resuscitated.

The Venom of Lonomia Obliqua

Lonomia caterpillars are most common in southern Brazil, where they kill roughly three people a year. The quality of their venom that causes death is an anticoagulant effect that results in uncontrolled bleeding, and sometimes death. On the plus side, the special qualities of Lonomia obliqua venom is of interest to the medical profession: people with clotting disorders may need a medically-administered caterpillar sting!

Welts From a Related Lonomia Species

The Action of Lonomia Caterpillar Toxins

Lonomia caterpillar venom can cause acute "disseminated intravascular coagulation," in turn can lead do uncontrolled bleeding throughout the body. As blood is leaked into the surrounding tissue from the damaged vessel walls, pressure builds up, causing the brain to compress, which can be fatal.

It's estimated that at least 500 people have died as a result of stings from the Lonomia caterpillar. It takes a lot of contact, however -- one sting from one caterpillar will likely not be fatal, but if you lean against a tress that has a massed group of Lonomia obliqua caterpillars on it, there is a chance the encounter will end in your death.

The number of serious stings caused by Lonomia caterpillars has been increasing, especially in Southern Brazil. There are apparently relatively few case studies, but one that shows up in searches is the story of an unfortunate 70-year-old woman in Brazil, who was stung when she put her bare foot into a shoe in which a Lonomia caterpillar was hiding. The spines stung her on the toe.

The woman suddenly slipped into a coma and was hospitalized; four days later, she began to have bleeding symptoms, including hematuria and skin hemorrhages. Every effort was made to save her, but the venom was too potent; she died from bleeding in the brain seven days after being stung.

Have You Ever Been Stung by a Caterpillar?

Have You Ever Been Stung by a Caterpillar?

After being stung by this or any caterpillar, the first step is to remove the often-invisible spines and hairs that in some cases may still be delivering venom to the victim. For this, simple duct tape is the recommended tool. Simply cover the sting with tape and remove it. Repeat several times -- this may help remove fragments and spines that remain on the skin.

If the victim is in dire straits and needs to be hospitalized, there are treatments for bleeding disorders that may be used. Apparently there is an anti-venom that has been developed and is being used for Lonomia sting victims, and has been shown to be effective.

The Sting: What Happens and Why

Initially, the sting of the Lonomia caterpillar causes a minor skin irritation. Often, the sting doesn't get any worse. But on some occasions, the sting gets progressively worse until the victim needs to be hospitalized. People who are allergic to insect stings are especially susceptible to the venom of Lonomia stings. In addition to the bleeding disorder brought about by the caterpillar's sting, there may be complications arising from allergic reactions.

The reason that this sting is so acute is the sac of venom located at the base of each stinging spine. The sharp point penetrates the skin, and the venom continues to be injected through the hollow point, which often breaks off in the skin. The toxin spreads throughout the vascular system, destroying the normal clotting function of the blood.

Skin Reaction of the Type Caused by Lonomia Envenomation

More Dangerous in Groups: How L. Obliqua Defends Itself

Lonomia is the name of a group of moths that occurs throughout Central and South America. The caterpillars are all protected by spines that contain strong venom. When another animal comes into contact with the spines, the poison causes pain and swelling. This is an excellent defensive tactic, and there are other poisonous caterpillars throughout the world that can sting. The Lonomia group, however, is unusual in the power of the venom. In the case of Lonomia obliqua, the venom can cause a runaway reaction in humans.

Lonomia caterpillars often rest in large groups. It's thought that this concentration of venom makes the protection even more powerful.

Lonomia moths are beautifully camouflaged to look like a fallen leaf. The lateral line across both wings and the light brown color mimic the shape, pattern and color of the leaves that litter the forest floor in areas where the moth lives. The caterpillar spends its life eating leaves, and the moth's job is to find another moth of the same species and mate, thus continuing the animal's life cycle.

This species demonstrates cryptic coloring in both the larval and adult stage. It's a very effective way to stay alive in a forest filled with predators looking for insects to eat or parasitize.

Raise Your Own Non-Deadly Caterpillars

There are a lot of caterpillar kits out there but this one is a favorite -- it's closer to the one scientists use in labs. The caterpillars eat, grow, and turn into butterflies as you watch. I love checking in with them every morning and seeing which ones have grown, shed their skins, or hatched into butterflies. 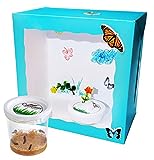 The following sources were used for this guide: