The Greek philosopher to whom the conception of the Atomic theory is attributed. He visualised atoms - the word is Greek for 'indivisable' - as moving through space, then colliding to form the universe and all natural objects in it.

His cheerful disposition led to his being styled "the laughing philosopher", and according to folklore he put out his eyes in order to prevent being distracted in his speculations.

Democritus is believed to have excelled in all branches of knowledge. 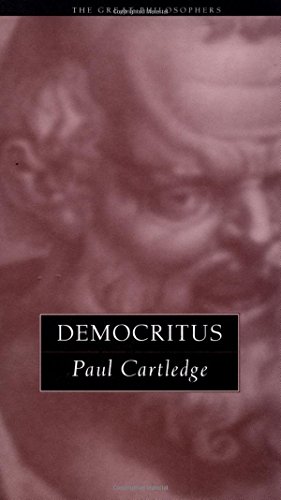 His name is associated with the first exposition of the atomic theory of matter, according to which all matter is composed of single, indivisible atoms exactly alike qualitatively. This theory was a departure from that of the earlier Ionic philosophers, who held that matter is composed of particles differeing qualitatively from each other and disagreed only concerning the nature of those differences.

Democritus believed that the first principles of the universe are atoms and empty space, everything else is merely thought to exist. And that the atoms, the space within they move, and their motion within that space are eternal. The worlds are unlimited; they come into being and perish. Nothing can come into being from that which is not nor pass away into that which is not.Further, the atoms are unlimited in size and number, and they are borne along in the wholie universe in a vortex, and thereby generate all composite things - fire, water, air, earth; for even these are conglomerate of given atoms.He wrote extensively on the nature of the matter, but only fragments of his original work remain.

"On the whole, no one gave more than superficial attention to any problems, except Democritus; and he seems to have thought deeply on them all and is particularly superior in respect to method. Democritus affirms that no element arises from any other. However, their common property, body, differing in its parts by size and shape, is the principle of all things."

"Democritus the Abderite supposed the universe to be infinite because it had not been fashioned by any Maker. And again he says it is unchangeable, and in general he states in express terms the kind of universe it is; The causes of what now exists have no beginning, but from infinitely preceding time absolutely everything which was, is, and shall be, has been held down by necessity. But he says the sun and the moon came into existence. They had their own motion without having any heat or light but having, on the contrary, a nature similar to earth. Each of them first came into being by a peculiar change of the cosmos, and later when the circle of the sun was enlarged fire was included in it."

Democritus was the son of Hegesistratus. He was a native of Abdera in Thrace and a pupil of Magians and Chaldaeans.

Democritus, regarded by some authorities as the greatest of the Greek physical philosophers, was born in Abdera in Thrace sometime between 470 and 460 BC, making him an older contemporary of Socrates.

When King Xerxes was entertained by Hegesistratus the young Democritus learned from the men of Xerxes court such things as theology and astronomy.

He studied under the Greek philosopher Leucippus, whose system he further developed.

According to Demetrius in his book on Men of the Same Name and Atisthenes in his Successions of Philosophers he traveled into Egypt to learn geometry from the priests and also went into Persia to visit the Chaldaeans. Some say he even went as far as India and associated with the Gymnosophists.

Aristixenus in his Historical Notes affirms that Plato wished to burn all the writings of Democritus that he could collect, but that Amyclas and Clinias the Pythagoreans prevented him, saying that there was no advantage in doing so, for already the books were widely circulated. And there is evidence for this in the fact that Plato, who mentions almost all the early philosophers, never once alludes to Democritus.

His biography is based largely on untrustworthy tradition. However, it seems certain that he inherited considerable wealth, which he spent traveling widely in the East in search of knowledge. He spent seven years in Egypt pursuing his interest in the mathematics and physics of the ancient schools. Of his subsequent life little is known. One tradition has it that he died impoverished at the age of about ninety. Others give his final age as over one hundred, and state that he became mentally unstable in his later years and was treated by the great Hippocrates.

Besides formulating the first atomic theory of matter, Democritus contributed to ethics, theology and psychology. Of particular interest are his views of perception, in which he held that sensations are the result of atoms emanating from the surface of objects. These, he believed, passed through pores directly into the body eventually to reach the mind. He also attempted to explain color vision and postulated four primaries, black, white, red and green, other colors being mixtures of these. The breadth of his knowledge and the impact of his thought on subsequent Greek science have many to regard him as the Aristotle of the fifth pre-Christian century.

The later philosophers Epicurus and Lucretius were his disciples.