The Wonderful World of Diatoms

Diatoms are tiny, usually single-celled organisms that live in water.

Diatoms are very important to our world and most people don't even know they exist.

There are saltwater and freshwater varieties of diatoms, but all are extremely beautiful and interesting.

Living in a House of Glass

Diatoms form shells or walls, called frustules, around themselves out of silica, so it's almost like their frustules are made of glass or quartz.

These frustules can be extremely ornate and have many spikes and designs, if the diatoms weren't so tiny, they would probably be killed off by all the people wanting to hang them on their walls.

The shells really are works of art.

The Importance of Diatoms

Although these tiny organisms may seem beautiful but useless at first glance, they are an incredibly important part of the world's ecosystem.

Diatoms photosynthesize and produce much of the world's oxygen.

A lot of our fossil fuels have also come from diatom deposits.

Diatoms live in both salt and freshwater, and some can even live in damp places

Two Diatoms and an Oscillatoria

The video below is of a marine sample showing a couple of oval or plumb-bob shaped diatoms, a long Oscillatoria green, with several small flagellates flitting around.

Diatoms are the principal constituent of plankton

Diatoms make their own food through photosynthesis. These tiny organisms also manage to produce a lot of oxygen as a by-product of photosynthesizing.

Numbers vary, but many people believe that diatoms account for 20-33 percent of the oxygen produced in the world today. That's more than the rainforests.

Ocean health is extremely important, not just for our joy in it, but also to keep breathing.

Get a Diatom Peel and Stick Wall Mural 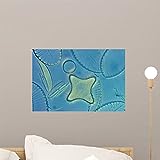 Foam on the Waves

Have you ever gone to the beach and seen wave foam that looked dirty?

Often the yellow foam you sometimes see on waves is not from some oil spill or pollution, it's actually caused by diatoms getting broken open.

Since each diatom has a tiny drop of oil inside it, when they get broken apart by a storm, that oil comes out and floats on top of the waves.

A Bunch of Diatoms

Diatoms sequester excess carbon by using it in their shells and then dying and falling to the ocean floor, where they then may fossilize and become rock.

It's thought they may be key to slowing or reversing global warming due to the way they capture carbon.

Many scientists are pondering the idea of seeding the seas with iron, which is difficult to come by in the ocean and needed for diatom reproduction. This may increase the numbers of diatoms and they could then sequester even more carbon dioxide.

This idea has its doubters. Since we don't know nearly enough about our oceans as we'd like, it is possible that seeding the oceans wouldn't work or would cause unexpected problems.

Learn About the Ecology and Life Cycle of Diatoms 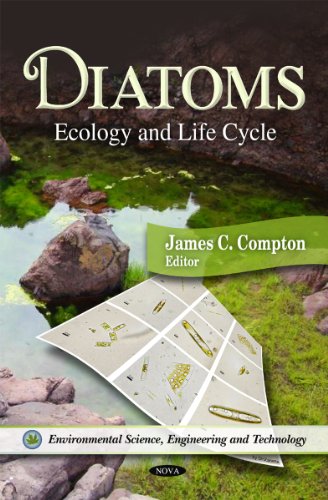 Diatoms are really useful in carbon dating sag ponds, which are ponds created when faults move.

A Pile of Fossilized Diatoms

A marine variety of diatom called Coscinodiscus, is just barely visible without a microscope

There are two main types of diatoms.

There are centric diatoms which are symmetrical radially. In other words, if you cut a centric diatom in wedges, they will match.

Then there are also pennate diatoms. They are symmetrical bilaterally. If you cut a pennate diatom in half, each half will match.

There may possibly be another division of diatoms soon, though it is debated. Some of the pennate diatoms have a certain groove and other don't, so some people they should be divided into their own groups.

Diatoms are usually exist either solitarily or in colonies.

The colonies are diatoms connected by various materials including mucilage threads, chitin, or siliceous goo.

The diatom colonies can connect into long threads.

Filamentous Diatoms may be Melosira sp.

Diatoms: Unnoticed Living Jewels in Water
This small book is the perfect one to teach your kids more about these amazing and beautiful organisms.
Buy Now

Get an Educational Microscope Slide Set

Get a wonderful microscope slide set to learn more about diatoms and other water organisms.

Entitled "The World in a Drop of Water", this set comes packaged in a nice wooden box and features individual descriptions of each of the samples within.

Some people use the natural beauty of the diatoms to create an even more beautiful image.

They view the diatoms through a microscope and very carefully move them into ornate designs and patterns.

It is an amazing art form that takes a lot of patience. There are still some of these incredible pictures from the 1800s.

Learn About Microscopy As A Hobby

Microscopes and the miniature, hidden world are so interesting, but it can be hard to know what types of microscopes to buy, how to work them, and all the other stuff. You can even learn to take photos and video of the microscopic world. 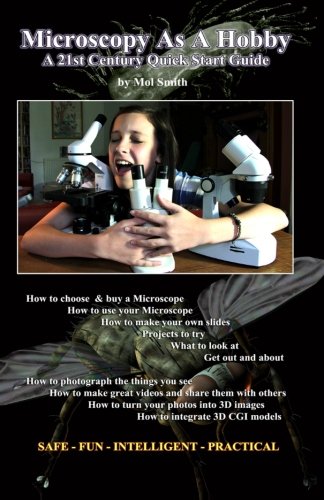 Microscopy As A Hobby. A 21st Century Quick Start Guide
This great book will help you learn all the basics, including how to take pictures and videos of the diatoms and other microscopic creatures your new skill will reveal.
Buy Now

Diatoms are the organisms. When they die, their shells can fossilize and turn into rock, called diatomite. If that diatomite is ground up it is called diatomaceous earth.

Diatoms Have a Role in the Rock Cycle

Silicon is one of the most common elements on Earth, so many rocks, including granite and obsidian, have a high percentage of their makeup being silicon. When the rocks weather and erode, little pieces of them get into the water cycle, where they eventually wind up in the ocean. As they dissolve they produce silicic acid which the diatoms then use to build their cell walls.

The diatoms live for a while and then when they die, their frustules fall to the bottom of the ocean, where they pile up over time and create "diatomaceous ooze". Eventually, as more and more shells build up, the pressure on the ooze presses it into a rock called diatomite.

The rock can stay down there for millions of years, but eventually it may be pulled deep under a continent by plate tectonics, where it will melt and rise up through the continental plate and eventually cool into granite. Over millions of years, the granite weathers down and makes it to the ocean and then the silicon is taken in by the diatoms to make shells and then, well, you get the point. This is one example, but similar things are happening all over the world all the time.

The rock diatomite is mined at many places around the world because diatomaceous earth is important for many different uses.

Diatomaceous earth is added to many products, including filters since it's one of the best filter mediums out there. People also ingest it as a way to kill internal parasites and make themselves and their pets healthy.

The most common use for diatomaceous earth may be the way you can use as a natural and safe bug killer. It so safe you can eat it, but it kills many of the bad pests that plague us, including bed bugs.

The picture to the upper right is of a diatomite mine is northern California.

All the white material in the picture is the fossilized remains of diatoms that lived during the Pliocene and Pleistocene times.

So while sabre-tooth tigers and giant ground sloths were wandering around, these layers on top of layers of diatoms were living and dying then falling to the lake bed. Millions of years later, we can tap these deposits to make all sorts of things we need in daily life.

And all those diatoms that lived and died were primarily two kinds, the two kinds shown in the picture to the right. 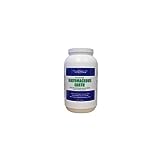 Learn More About Diatomaceous Earth on My Page About It