Dionysus, the Dual God, from Tales of the Ancient Greeks

Dionysus is not just the God of Intoxication

Dionysus is said to have invented wine, a handy god to have around indeed. He is not just the god of wine, but of the madness which can follow a few days of binge drinking and consequently of all madness.

Dionysus is a strange concept - he stands somewhere between man and woman, human and god, for he has a complex dual nature.

On the one hand, he is the god of agriculture, and also the patron god of the Greek stage. On the other hand, he represents the outstanding features of mystery religions, of ecstasy, and spiritual intoxication. It's this connection with spiritual euphoria, a condition close to physical inebriation, which makes Dionysus a fascinating and elusive deity.

God of Wine and Intoxication

To our modern eyes, a deity devoted to wine would be a benevolent and harmless figure, but wine has negative aspects too. It dulls the wits, accelerates anger and causes strange and often deadly behaviour.

The Greeks were well aware of the dual nature of wine, and of gods.

Bacchus, the Roman god of wine and intoxication, is equated with Dionysus, but his nature is more basic and concerned mainly with intoxication. So intoxicating did his celebrations, the Bacchanalia, become, that they were widely notorious for their physical and criminal character, and eventually forbidden by the Senate.

The role of Dionysus as vegetation god is obvious, after all he introduced the grapevine and taught the secrets of its cultivation and of fermenting wine.

His symbol is the thyrsus, a stalk of fennel tipped with a pine cone. This was a staff of giant fennel (Ferula communis) covered with ivy vines and leaves, topped with a pine cone. Where these emblems were, there was the spirit of Dionysus also. It was a sacred instrument at religious rituals. Sometimes the thyrsus was displayed with a wine cup, another symbol of Dionysus, forming a male-and-female combination.

The growing and transforming of the grape is in the realms of fertility, and at times he is honoured in company with Demeter, Great Mother of the grain, but more often with her daughter Persephone.

The son of two realms

Dionysus himself is physically ambiguous, he is beautiful, with rich curls and fair complexion.

Dionysus is also, unlike most of the other gods, the son of a mortal woman, Semele. This means that by birth he is a son of two realms, the mortal and the divine, centred on the dialectic between identity and otherness, autochthony and acceptance of the outsider.

This theme of duality also shows in his marriage to Ariadne, a mortal woman.

The word 'mystery' itself is from the Greek. "Musteria" refers to secret rites or doctrines where the inner-workings of the cult were kept secret from the general public.

The Dionysian Mysteries appear to be a complex mystery religion which used wine and possibly other intoxicants, together with trance inducing dance and music, to induce an alteration of consciousness. In modern parlance, they regularly got stoned.

The Mysteries seem to have attracted the lower classes and the marginals of Greek society, the women, slaves and foreigners.

However, the Dionysian Mysteries remain largely just that -- a mystery.

The fate of Orpheus

It is said that when Orpheus lost Eurydice he roamed through the land of Thrace weeping and playing sad tunes on his lyre. One fateful day, he came upon a band of crazed women, Maenads, who were devotees of Dionysus. They attacked him, throwing rocks, branches, and anything else that came to hand, but his music could charm rocks and the missiles refused to strike him.

Finally, the Maenads fell upon him all at once and tore at him with their fingernails, grabbing and tearing chunks of flesh from his limbs, gouging his eyes and and ripping him to pieces. They left his dismembered body upon the mountain for the scavengers.

From this account we can assume that followers of Dionysus were little favoured, and women followers least of all. I smell an ancient rat here. The Greeks were thrusting closer to a patriachial religion and denigrating anything female they came across.

A woman who followed an older deity was outside Society and deemed to be capable of any heinous action, even ripping a man to bloody pieces with her bare hands.

Dionysus had an ancient form of co-tenancy with Apollo at the Oracle of Delphi. In truth, Dionysus was present in the sacred sanctuary on Mt Parnassus long before Apollo arrived with his arrows.

The two had a pact. There was a type of treaty, a settlement between light and dark, sky and earth, between Dionysus, the chaotic god of wine and frenzy and Apollo, the emblem of civilisation and the most recognisably Greek of all the gods.

The Origins of Modern Theatre

The theatre we know today began in Ancient Greece. Through singing and dancing, the followers of the Dionysian cult would tell stories as a group event with everyone as the chorus.

The Greek Theatre we associate with such notables as Aristophanes and Euripedes is credited to Thespis, the "inventor of tragedy" and the first prize winner at the Great Dionysia in 534 BCE.

Theatre had a central place in ancient Greek society. In an age where there wasn't much visual media, it was where you saw creations of another life, where you saw spectacle and where, much like today, the community gathered together as a social group for education and enjoyment.

You can say it all began with Dionysus.

Theatre of the Gods

The Craftsmen of Dionysus: An Approach to Acting (Applause Acting Series)
Buy Now 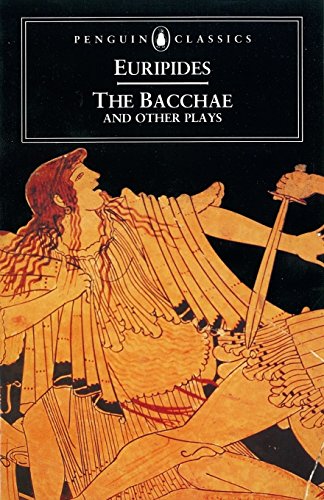 The Bacchae and Other Plays (Penguin Classics)
Buy Now

Bulfinch's Greek and Roman Mythology: The Age of Fable

All comments are appreciated. You don't have to be a Greek God to leave yours.

Have a Drink for Dionysus