Are Dolphins Really Smart? The Book You Need to Read

Justin Gregg's book doesn't tell you which animal is "smarter", rather, it teaches you how to think about intelligence

Before you prepare to engage in a fiery internet debate over the subject of animal intelligence with me or anyone else, stop what you’re doing. Read this book. That is, if you consider yourself scientifically and open minded.

For less than 20 dollars, Justin Gregg, author of Are Dolphins Really Smart? The Mammal Behind the Myth, will give you the priceless gift of knowledge in the form of not only a readily accessible synopsis of our current understanding of animal cognition, but also a guide on how to properly interpret and assess animal minds, exiting the methodologically flawed assumptions of which the non-scientifically minded naturally gravitate (read: emotion and wishful thinking).

This is something that most of us are guilty of, at one time or another. Humans have very complex emotional lives, and perhaps too complex—so rich that they tend to unknowingly project their mind’s motivations and inner workings upon the minds of other species, effectively corrupting essential objectivity. Many humans that work with animals also love animals, and it is undeniable that there is a strengthened desire for certain outcomes in animal studies. 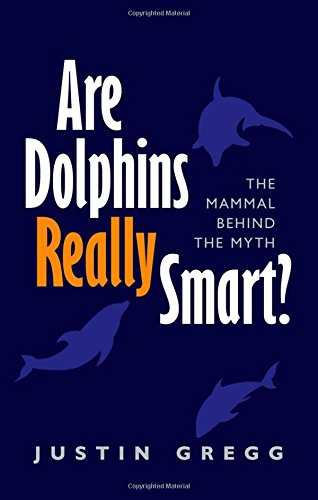 Are Dolphins Really Smart?: The mammal behind the myth
Here is Justin Gregg's book, unsurprisingly criticized by people with a faithful 'belief' in what they know about dolphins.
Buy Now

Where does Gregg’s book fall within the captive dolphin debate?

So let’s get right to it; one of the main reasons this subject is a hot button topic right now.

As human beings we are prone to all sorts of biases. Lori Marino, a neuroscientist featured in the popular anti-SeaWorld documentary Blackfish, is biased. She is an animal rights advocate and the ‘science director’ of the Non-Human Rights Project.

I’m also biased. I became interested in the marine animal welfare debate because I’m interested in the ethics of keeping wild animals in captivity because I keep exotic pets and support zoos, and if keeping one species is inherently wrong, I know the moral dilemma doesn’t stop with aquatic mammals. I am routinely accused of keeping ‘slaves’ because my pets are not domesticated, and I am not in agreement with that mentality.

I was thoroughly surprised and impressed with Gregg’s treatment of the inflammatory subject matter, because given his distancing from injecting personal sentiment on what we should believe, emotionally, from the scientific research, it was not clear what his actual beliefs on these touchy subjects are.

As far as I know, he is not involved with captive dolphins or benefiting from their 'exploitation', other than citing captive dolphin studies in formulating our current understanding of the marine animals (like Marino does). He does not ‘work for SeaWorld’ (a common accusation I endured when I wrote my Blackfish criticism). Gregg has a tremendous respect for animals and a sincere interest in understanding their minds without the illusions people cast on them.

He is critical of bloated claims that stretch the truth or abandon it completely for the sake of exciting headlines that grab people’s interest (like his title). He is not like me, as I obviously have set beliefs based on my 26 years of existence observing animals and keeping pets, and I have my own beliefs of how ’intelligent’ animals are based on personal intuition and what I believe is common sense. People should be following and putting the most stock into the opinions (or editorializing of facts) of people who can push their emotions to the side.

So what’s the ANSWER? Are dolphins smart or not?

No, no, force yourself out of this frame of mind.

Not only are such exciting claims about dolphin (and other animal) ‘intelligence’ damaging to good science, they are disrespectful to animals as well (those who are interested in the facts about animal cognition and not with finding supporting evidence to campaign for animal rights), which is probably the opposite of what people think it’s doing.

Animal minds do not need to be like ours to be fascinating in their own right (which Gregg also widely believes). We are potentially missing out on truly understanding how another species operates when we become obsessive only with finding the parts of their puzzle that correlate with our desire.

This might be important, since it’s hard to think like, or experience the mental experience of a non-human, but we shouldn’t be limiting ourselves. This is why Are Dolphins Really Smart has become my bible, in my current initiative to trudging through the multiple studies about animal cognition.

What's in the book

Greggs’ book documents the origin of dolphin cognition research, and without giving too much away, it involved a then highly respected scientist, John C. Lilly, who prescribed his ocean-dwelling subjects LSD.

The film Altered States, trailer shown at the right, was a movie that stuck in my mind ever since I watched it as a kid on the Sci Fi channel's less popular movie line up at 10 AM. I've recently discovered that this movie's main character was based on Lilly. The director of The Holy Mountain (warning, some viewers might find this content disturbing), Alejandro Jodorowsky, participated in one of his isolation tank experiments. This film gives an idea of some of the psychedelic mythology of the time. The movie has a 'cruel beauty'.

It is extremely unfortunate, however, that Gregg likely won’t get the proper dues for his wonderful book, because many will become offended by the title leading to its automatic dismissal. “What do you mean dolphin’s aren’t smart? Of course they are! What poppycock”. Some of the few reviews on Amazon.com for the book are baseless rants against its alleged proposal that dolphins are not smart. Gregg’s title is a simple lure. An enticement, if you will, to garner interest in the book’s content amidst the thriving cetacean ethics debate. It may surprise the reader that Gregg, in the first chapter, technically dissects and invalidates the question being asked.

Discussion in the book

Dolphins are not "special": Research and animal rights

It is not uncommon to hear people purport that human intelligence is not unique, special, or superior.

The strange irony of animal rights activists who dislike Justin challenging the notion of dolphin ‘super intelligence’ is the fact that Justin is, indeed, encouraging people to acknowledge the abilities of all animals by revealing research that points to intelligent qualities that are comparable or superior to those found in dolphins.

People take this as a claim that dolphins are ‘not smart’, because he is comparing dolphins to animals commonly presumed to be ‘dumb’, like the ones we eat, which I had thought a large portion of people were trying to get us to respect and stop eating. The people objecting to Justin’s statements are calling these animals ‘dumb’, not Justin. He is simply, objectively, analyzing and comparing what we know about animal minds.

If anything, Justin’s commentary about our anthropomorphic view of ‘intelligence’ crosses paths with the animal liberationist view that animals are not to be judged by the ‘arrogant human’s’ idea of mental worth. This fundamentally reveals the paradox of animal rights activists’ persistent need to elevate the status of dolphins, great apes, and elephants based on their human-like qualities. They should be advocates of the approach Justin Gregg takes in his book.

Behind the dolphin smile

Therefore, even though I'm sure there will be very little agreement, this book is for everyone. It might be hard for dolphin fans to stomach, but true animal enthusiasts shouldn't object to a fair and balanced use of the scientific method. Gregg also acknowledges where more research is needed, and you will see that this will be a reoccurring statement. Therefore, many questions might go unanswered, such is the way of exploring unknown, complex topics. I find that I learn a lot more valuable information when science writers distance themselves from their own perceptions of animals and stick to the cold facts. Are Dolphins Really Smart? is a breath of fresh air.