Dragon and Tiger Symbolism and Meaning

Tiger and Dragon in Chinese Culture

The earliest image of tiger discovered in Henan province, central China in 1987 in an ancient tomb unearthed. The earliest image of a dragon ever found made of shells was found on the right side and a tiger, also made of shells was found lying on the left side of a body buried there. These images are said to be about 6000 years old. Both the dragon and tiger were totems in ancient times.

With the development of agriculture, the Chinese began to rely more on the climate and were also concerned with its change. Since they believe the dragon is in charge of the weather, therefore it soon replaced the tiger. The dragon came to hold the dominant position in Chinese culture and the tiger became his subordinates and hold the title as 'The king of mountains'.

Dragon and Tiger in Feng Shui

In the study of Feng Shui, dragon is regarded as an auspicious animal, it connotes prosperity and activity while the tiger is considered as a vicious and harmful animal that is being feared and venerated. The Chinese also believe if you see a white tiger when gambling it is considered unlucky. According to some legend, a certain tiger changed its coat of fur after 500 years and turned white. That is why they call the West side of a house or building the ‘white tiger’. Both the East (dragon) and West (tiger) are often used by feng shui experts to relate to enhancement of Qi or feng shui cures. In feng shui, the green dragon side of your house represents the power of the male and the white tiger side represents the power of the female. If the tiger side is higher than the dragon, then the wife has more influence and power over the family. 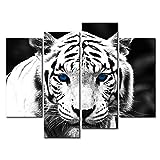 Dragon and Tiger in Martial Arts

Dragons seems have always been an eternal rival to the tiger, thus various artworks depict a tiger and dragon fighting an epic battle. In Chinese martial arts, the ‘Tiger Style’ is based on memorization of techniques and brute strength while the “Dragon Style” is used to describe styles or techniques of fighting based more on understanding movement. Tiger fights in a straightforward attack bulldozing its opponent while the dragon fights using circular flexible attacks. These two active animals have come be to be known as oppositional symbols – one reflecting a ‘soft’ style, a defensive and more fluid ‘circular attack’ that is represented by the dragon. The other reflecting a ‘hard’ style of martial arts (attacking and unrelenting) that is symbolized by the tiger. Because of this people like to consider these two magnificent creatures as a symbol of yin and yang (the balance of opposing forces).