Aquatic Closed EcoSphere Ecosystem Décor For Your Home or Office

There's something wonderfully special and magical about gazing into a small world. The whole world is right there before your eyes, allowing you to gaze into all of its tiny little wonders. If you didn't know these existed, I'd like to introduce you these beautiful spheres of life, the EcoSphere Closed Ecosystems.

You can bring the magic of Nature into your home or office with one of these wondrous spheres and hold it right in your hands. I've done it, and it was one of the best gifts I've ever received. They make great gifts for everyone, as they are whimsical and cause intrigue and wonderment. They also make a great gift for the "person who has everything."

I've incorporated the concept of Ecotherapy into this article as well. It is a brief introduction that you may find interesting. I think it goes with the concept of these Ecospheres marvously. I've also included one of my favorite poems that I found years ago. It's titled "Earth Ball," and you can find it below. Enjoy.

developed by NASA for space-age technology

I received my EcoSphere sometime in the beginning of 2000. I can't recall exactly. It was new to me then, but I have since learned that they have been around for over 25 years. The EcoSphere Closed Ecosystem is the original, and it was developed using NASA technology. In fact, that is where it all started.

NASA was researching possible ways for spacecraft to have a completely self-sufficient environment within. These little spheres were created. They thought they were so cool and aesthetically pleasing that the scientists thought everyone would like them and perhaps want one. They became available for the public, and now you may have your very own.

The sphere demonstrates a completely closed self-sufficient environment. The living organisms within the sphere are shrimp, algae, and bacteria. Combined with water, the living organisms thrive. The design is fantastic in its simplicity and demonstrates the interdependence between animals and plants with the importance of healthy bacteria emphasized. Perhaps the most amazing component of these spheres is the water, a reminder that all life depends on water and that the earth is a water planet. 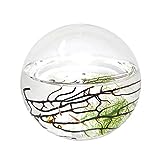 The original EcoSphere is completely spherical and comes in different sizes to choose from.

There is also a pod shaped EcoSphere that was introduced after the success and popularity of the original.

Pictured and available right is the small 4" Ecosphere. Click on this item to view and compare available sizes, all on one page together. There is a new huge one!

"...if the earth were only a few feet in diameter"

I'd like to share a poem with you that reminds of these magical little balls of wonder.

Above, I stated that there is something really special and magical about gazing into a small world, and this poem describes this notion perfectly. It's titled "Earth Ball." I first came across this poem in the mid '90's, have never forgotten it, and now, I am sharing it with you.

I discovered this poem when reading my copy of Howard Clinebell's Ecotherapy.

It begins "if the earth were only a few feet in diameter..." -hope you like it.

Introduction Video for the EcoSphere - video made by Ecosphere Closed Ecosystems

- Healing Ourselves, Healing the Planet

Earlier, I shared with you a poem that I found in Howard Clinebell's book titled, Ecotherapy: Healing Ourselves, Healing the Planet. It's a book that I've had for many years, and it was instantly a favorite. Therefore, I have included it here for you.

I came across this book at a time when I was desperate to get back to Nature. I had been living in downtown, Washington, D.C. for several years, and the day to day grind was really getting to me. I needed to see open fields, walk through forests, and large green lawns. Don't get me wrong, my stay in D.C. was filled with marvelous experiences and opportunities, but the day to day began to take over. After 8 years, I simply just needed "green." Shortly before I moved, I found this book, and it really helped me in those last months of city living.

Another and perhaps more common term that describes heal the planet, heal ourselves notion is "Ecopsychology." -sometimes spelled Eco-psychology.

Cast your vote for EcoSphere Ecosystem