Theories About the Disappearance Of Everett Ruess

Artist and poet Everett Ruess was a wanderer, a loner, and a minimalist who was also a prolific letter-writer. Each time he'd set out to explore the wild beauty of the Southwest, Everett would pen long, emotional letters to his parents in Los Angeles, to his older brother, Waldo, or to one of his small contingent of close friends.

But in November, 1934, at the age of twenty, Everett's letters suddenly stopped. He disappeared in the canyon country near Escalante, Utah, never to be seen again.

Who Was Everett Ruess?

Everett Ruess was born into a family that placed great importance on literature, philosophy and the arts. His father, a professor at UCLA, pushed Everett to read extensively, and his mother, a poet and artist, taught him to make block prints. In addition to writing and engraving, Everett also developed an interest in photography.

The Boy Begins to Wander

Everett Ruess's solo adventures began in the summer of 1930 when, at the age of sixteen and with his parents' blessing, he hitchhiked up the California coast. In Carmel, he arrived at the door of photographer Edward Weston's studio and introduced himself. He later paid an unannounced visit to Ansel Adams and Dorothea Lange, who was best known for her images of migrant workers during the Depression. All three photographers took a liking to Ruess.

Everett Ruess also came to know the Navajos better than most any non-native in the Southwest at the time and became quite proficient at their language. And just as he'd apparently had no qualms about introducing himself to Edward Weston, Ansel Adams or Dorothea Lange, on the reservation he would occasionally arrive at a hogan and invite himself to a meal.

Even more odd from the Navajo perspective, Ruess would set up camp in empty hogans that had been abandoned after their owners' deaths. The Navajo are wary of the spirits of the deceased and would never think of doing such a thing. And on several occasions, Ruess even burned abandoned hogans for campfires, once incurring the wrath of a Navajo woman who happened by at the time.

Read an excerpt from The Whetting Stone

A Letter from Everett

I have not tired of the wilderness; rather I enjoy its beauty and the vagrant life I lead, more keenly all the time. I prefer the saddle to the streetcar and star-sprinkled sky to a roof, the obscure and difficult trail, leading into the unknown, to any paved highway, and the deep peace of the wild to the discontent bred by cities. Do you blame me then for staying here, where I feel that I belong and am one with the world around me? It is true that I miss intelligent companionship, but there are so few with whom I can share the things that mean so much to me that I have learned to contain myself. It is enough that I am surrounded with beauty.

~~Everett Ruess, from the last letter he sent to his brother, dated November 11, 1934 (Source: NationalGeographic.com)

Everett's art included numerous drawings and at least 100 watercolors, but his wood block prints are now his best known works. The themes of his prints include southwest images like those of Canyon de Chelly, Grand Canyon and Monument Valley, seascapes inspired by the California coast, and trees such as junipers and cyprus.

In addition to his art, Everett Ruess left behind 175,000 pages of journals, letters, and poems. You can read many of them here.... 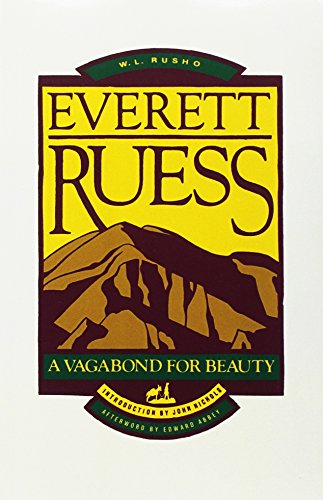 Everett Ruess: A Vagabond for Beauty
This is a collection of Everett's letters to family and friends, chronically his search for ultimate beauty and oneness with nature.
Buy Now

These are Everett's journals from 932 and 1933, in which he confided his joys and regrets, his complaints, and his hopes, as well as some exciting adventures. They also provide insight into Everett's deeper feelings about the complexity, frustrations, and beauty of life. 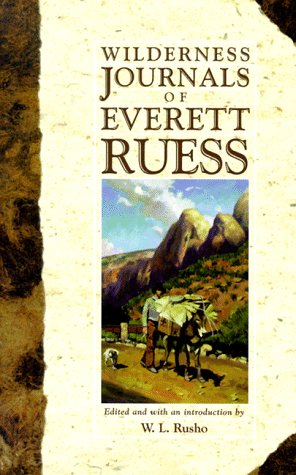 On Desert Trails with Everett Ruess

This collector's item was originally published in 1940. It includes Everette's poetry, letters, artwork and photography. A special appendix tells the Salt Lake Tribune's account of its 1935 expedition to southern Utah in search of Everett Ruess.

The Search For Everett Ruess

Several prevailing theories cropped up over the years to explain Everett Ruess's disappearance. Some speculated that he'd traveled from the town of Escalante, Utah, to the Navajo reservation, where he "went native" and spent the rest of his life incognito. Others guessed that he'd committed suicide, going to great lengths to hide himself before doing so. Another theory was that he'd died in an accident--falling off a cliff or drowning perhaps--or from hypothermia. Or perhaps he was murdered.

In March, 1935, several months after his disappearance, a search was launched by ranchers from the remote town of Escalante, where Ruess had been one of the very few strangers to ever pay a visit. In fact, he rather made himself at home during his brief stay and even befriended some of the local boys, making quite an impression on the townsfolk, who later set out to look for him.

They knew that a week after departing, Ruess had shared a campfire with two sheepherders about fifty miles from Escalante. Soon afterwards, he may have run into cattlemen in the Escalante Desert's farthest range. From there, the searchers found nothing in Soda Gulch, nor was there any sign in Willow Gulch, two miles northwest of Soda. But in the next tributary southeast of Soda, called Davis Gulch, they did make a find.

When the men reached the bottom of an old horsepacking trail, they located Ruess's final camp, along with his two small burros enclosed in a "brushwork corral." The searchers also found a bridle, halter, and a rope draped over the fence and, in a nearby alcove, empty cans, candy wrappers, the impression of a bedroll in the dirt, and a number of footprints. As they continued riding up and down the canyon, however, they found no sign of Ruess's camping gear, painting kit, or diary.

The searching went on for months without any further luck.

In the early 70s, a Navajo man named Aneth Nez confided in his granddaughter, Daisy Johnson, that he'd witnessed a murder. The crime had occurred 37 years earlier in southern Utah, where three Ute boys had killed a young white man. Mr. Nez witnessed the murder from his vantage point up on a ridge. When the boys then left, taking the victim's two mules with them, Mr. Nez buried the young man's body, out of respect he said.

In 2008, Daisy Johnson finally told the story to her younger brother, Denny Bellson. Then on May 25th, the two of them went to the area their grandfather had talked about.

Mr. Bellson first saw a saddle. The saddle likely had belonged to his grandfather, for, in the Navajo tradition, he would have disposed of it "because it had been contaminated by coming in contact with the blood of the dead." Then, Mr. Bellson found the bones, jammed into a rock crevice. The skull was in pieces, indented as though caved in, which fit with his grandfather's tale.

Researchers said the initial evidence was circumstantial--that the bones confirmed the body was that of a Caucasian man, 19 to 22 years old, and about 5 feet, 8 inches tall. Those details were a perfect match for Everett Ruess. A facial reconstruction was the next step, since the jaw and eye sockets were largely intact, and the result closely matched photographs of Mr. Ruess taken by Dorothea Lange.

Then came the DNA testing. The results showed that the DNA extracted from the bones was a 25% match with Everett's nieces and nephews, which is the exact amount expected with that family relationship. Kenneth Krauter, a professor of molecular, cellular and developmental biology, stated the conclusion was "irrefutable." (Source: New York Times)

New Information On The Mystery Of Everett Ruess

A friend of mine informed me of a follow-up New York Times article. It was published on October 22, 2009.

Apparently, new results from the Armed Forces DNA Identification Laboratory in Rockville, Maryland, have now disproved the Initial DNA tests done by University of Colorado researchers. And University of Colorado biologist Kenneth Krauter, who handled the initial tests, said he did a second round of tests that also disproved his original results, but he wasn't able to determine how he made a mistake in the first place. He too considers the Armed Forces results definitive.

I guess the mystery of Everett Ruess is still just that.

Read About the Mystery of Everett Ruess

If you love a good mystery, make it a true story.

Here are two books about the man and his disappearance. If you are really interested in this story and the mystery of Ruess's disappearance and are so inclined, you can read both and compare. Both books have been very well received. 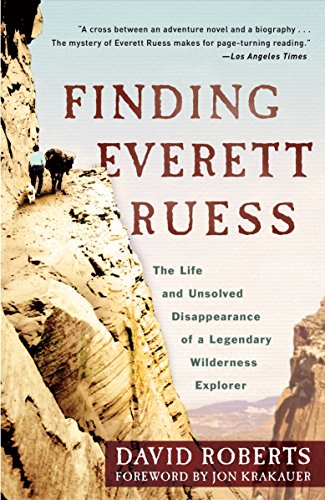