Remembering Summer Time in the 1950s

Let Your Mind Drift Back to the Fifties

Lazy summer days... I grew up in the 1950s and maybe that was the era of your childhood too. Now and then, I enjoy a little trip down memory lane to all the summer fun we had.

I'll share with you some of my experiences of that long ago time. I hope it triggers some memories from your youth too. Try out some of the writing prompts I've provided to get you started.

(Photo from my family album - the six Martin kids... I'm the one standing by our brother in the back)

Playing Outside - Carefree Days from a 1950s Childhood

I remember sun-filled days roaming the Kansas prairies. We ran barefoot to the creek to look for crawdads. Turning over rocks, we squealed when the small crustaceans shot out from hiding.

They tried to pinch you when you captured them but their small claws didn't hurt very much. We would build small dams to create a side pool. There we would corral our catches including the crawfish and little minnows.

My Friends' Memories of Playing in the Creek

gottaloveit2 - I used to live by a creek and crawdads and tadpoles were my joy. I'd always catch them and then let them go. Lots of great memories. I'm so very glad I'm not one of the plugged in generations. They miss so very much.

Frischy 4 years ago from Kentucky, USA - For a few years we lived in a small town where the kids often took off to a nearby creek to catch crawdads. My sister and I were not often allowed to join them. I think my mom was afraid we would drown, although as I recall the water was only 3 inches deep. Pretty fun on the days we were allowed to go!

Nancy Tate Hellams 4 years ago from Pendleton, SC - I didn't have a creek to play in the 50's but sure enjoyed playing in our creek with our son and grandson more recently. We did spend a lot of time in a pond at my friend's farm.

Karnel 4 years ago from Lower Mainland of BC - I grew up in the 60's and most things were simple back then, we also used to catch tadpoles in the creeks here in Canada. We spent a lot of time outside without a care in the world mostly playing in the neighbor's potato fields.

Remember some of these TV shows, music, ads, candies, cars with tail fins and other vintage things from the 1950s?

Memories Shared by My Friends

burntchestnut - I loved the video of kids from the 1940s and 1950s. Although I was more a child of the 1960s, I had those clamp-on skates and had many falls. It's a wonder I didn't kill myself.

More Stories from My Memory Bank - by Virginia Allain

I Was a Middle Child

Those were the lucky years, the golden times in the 50s and 60s as we grew up. We didn't know it then, that it wouldn't always be that way.

Despite recessions, family setbacks, childhood injuries like my brother's broken arm or other mishaps, the family regrouped and went on.

(Photo of the Martin children before Shannon was born. I'm the blonde one with the pigtails in the 2nd row.)

Country Kid? This Will Bring Back Memories 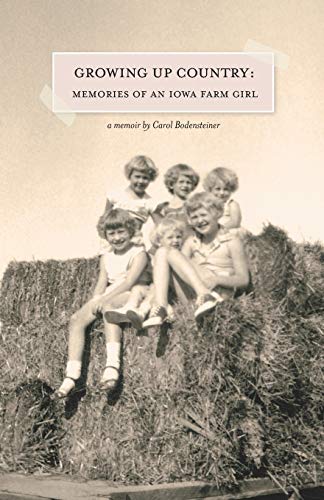 Growing Up Country: Memories of an Iowa Farm Girl
I grew up in the country and remember feeding the calf from a bucket, climbing a mountain of hay in the hayloft, and wading in the creek. This was a real trip down memory lane for me. Read this to see what memories it brings back to you.
Buy Now

Since we lived in the country, we didn't make picnic excursions to a park. Mom would get fed up with fixing food for eight people in a hot kitchen during the Kansas summer heat waves. She would load our arms with the meal fixings and we would have a cook out under some shady trees between the barn and the alfalfa field.

I remember a small pit dug in the dirt to contain the campfire. We roasted weiners on sticks over the flames and finished by toasting marshmallows. It was tricky getting them brown without it catching on fire.

Mom varied the menu by putting sliced potatoes, onions and hamburger in a large coffee can and burying it in the coals. She had been a den mother for the boy scouts once, so I'm guessing she learned that from scouting.

to trigger memories of long-ago summers

Three Writing Prompts to Get You Started

Eating Outdoors - Write about it. Think about picnics and outdoor eating experiences from your childhood. Where was it (backyard, park, a lake, scouts, camp, grandparent's home, family reunion)? Was there a picnic table or a blanket on the grass? What foods did you eat (deviled eggs, watermelon, cupcakes, homemade ice cream)? Tell how it was prepared, include favorite recipe, and tell who fixed the food. Did you cook a hobo meal in a coffee can over an open fire or did Dad grill over charcoal? Did you make s'mores or toast/burn marshmallows? Have a wiener roast. Any mishaps (rain, bad food, ants, injuries)? Was there a picnic basket?

Write about these and also memories of picnics with your own children.

Fun with Water - Write your childhood memories. Children are greatly attracted to water. Was there a fountain, a creek or pond where you could sail toy boats? Write about making paper boats or creating a raft. Did you swim, wade, fall in, build dams, hunt for crawdads or any other activities around the water? Tell about any restrictions there were about being around the water or if you had total freedom.

If there was no creek, did you play in a washtub of water or a kiddy pool? Did anyone in the neighborhood have a pool?

Seashore or Lake Memories - Write about them. When you were a child, did you go often to a beach or a lake or was it a major outing? Tell about the family's preparation for the day and what was taken along. Describe your swimming outfit. What food do you associate with the beach or lake? Try to remember what was fun about the day and put in sensory memories like the grittiness of the sand or the feel of the waves or the sound of the seagulls. If you didn't have this kind of excursion, write about what you thought the ocean would be like.

English Memories of a 1950s Childhood 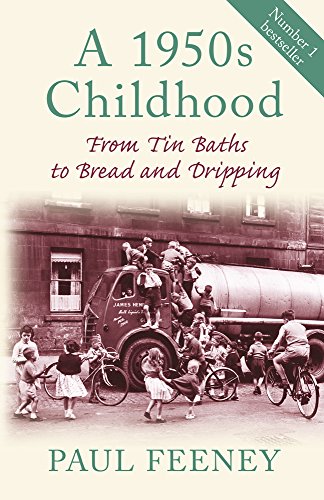 1950s Childhood (Memories): From Tin Baths To Bread And Dripping
This one is British, so I found it fascinating to see the similarities and the differences to my own American childhood from the same time period.
Buy Now

More Writing Triggers to Save Your Childhood Memories