George Berkeley (1685-1753), Irish philosopher and bishop, who opposed the philosophic views of John Locke Berkeley was born near Kilkenny, Ireland, on March 12, 1685. Though Anglican in religion and of English stock, he always regarded himself as a true Irishman. In 1699 he entered Trinity College, Dublin, where he took his degree in 1704. He was ordained a deacon in 1709 and was married in 1728.

Berkeley remained connected with Trinity until 1724, when he became dean of Derry. At Derry he had for the first time sufficient means to set on foot a strange project that he had long contemplated. He planned to establish a college in the Bermudas for the education and religious enlightenment of American Indians. A college so placed in those days could hardly have succeeded; however, he obtained a royal charter and a promise from Parliament of £20,000, and in 1728 he set out for America. He went first to Rhode Island to wait for his money to be paid; but Sir Robert Walpole, who distrusted his plan, permitted and perhaps encouraged delay, and the scheme was finally abandoned in 1731.

For the last 20 years of his life, Berkeley was bishop of Cloyne, near Cork, in which period he wrote on the religious and economic problems of Ireland, besides discharging his episcopal duties. He died on Jan. 14, 1753, while on a brief visit to Oxford, England, where his son George was entering Christ Church College. 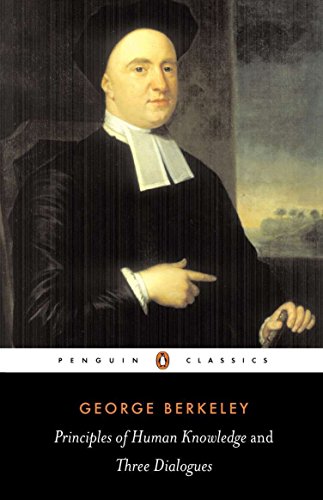 The works on which Berkeley's fame rests were produced while he was very young. In his subtle Essay Towards a New Theory of Vision (1709) he deliberately stopped short of his ultimate conclusions, apparently with the idea that his novel opinions should be presented only by stages to the public. His greatest work, the Treatise Concerning the Principles of Human Knowledge, was published in 1710, and in 1713 he aimed at a wider audience by presenting the same doctrine in more elegant and popular form in the Three Dialogues Between Hulas and Phil-onous. Important among his later writings are De motu (1721), a Latin essay on the philosophy of science; Alciphron, or the Minute Philosopher (1732), a long dialogue mainly directed against the Deists; and The Analyst (1734), an acute criticism of some logical difficulties in the work of Sir Isaac Newton. His last substantial book, Siris (1744), the ponderous and even rambling style of which is startlingly unlike the grace and clarity of his early writings, presents no actual change of doctrine, but puts a new and significant emphasis on the strong metaphysical strain in his thinking.

The perennial interest of Berkeley's philosophy is the result of his unusually diverse gifts. He had an acute critical intellect, which he usually employed in the defense of common-sense opinions, and a high talent for bold and speculative metaphysics. His position can best be seen by contrasting it with John Locke's, whose Essay Concerning Human Understanding (1690) Berkeley had carefully studied as a student. Locke was the apostle of the great scientific achievements of the 17th century and was himself a friend of its leading scientists. He presented the universe as a material system in which "bodies," corpuscular in structure, act mechanically, by "impulse," on each other and on the human senses. Their action on the human nervous system causes "ideas" to occur in the mind, and these ideas are the sole objects of which man has direct awareness. The ideas of "primary qualities" faithfully represent the actual character of material things, but ideas of "secondary qualities" do not. It is "by mistake," Locke argued, that men "attribute reality" to color, sound, taste, and smell. He held that, besides matter, "immaterial substances" exist; but he confessed that he could find no way of proving this, and indeed did not wholly reject the idea that consciousness might be merely a property of matter. Against all this Berkeley reacted vigorously. He held that the scientific world view was radically incoherent and that it encouraged atheism and therefore vice; he accused it of absurd deviation from common sense; and, finally, he felt it to be simply repulsive. Accordingly, he set before himself the twin aims of defending common sense against its scientific detractors and of undermining the supposed metaphysical foundations of science. He believed that these aims were not inconsistent and perhaps hardly realized that they were distinct.

The essence of his procedure was simple. Taking over from Locke himself the axiom that "ideas" are the only objects of direct awareness, he pointed out that, if so, there could be no warrant for belief in "matter," in a world of "external objects" conceived to be distinct from and independent of our ideas. If we are aware of nothing but ideas, on what basis could we assert the existence of anything else? Locke's view implies that we cannot be directly aware of the most ordinary objects; hence ordinary objects are unlike what they appear to be, and we cannot know at all what they are really like, or even that they exist. But if we hold, Berkeley argued, that ordinary objects simply are "collections of ideas," then we can hold that we are indeed directly aware of them and can and do know what they really are. They are just as they appear to us to be. But—and the metaphysical strain enters at this point—if objects are collections of "ideas," they can exist only "in a mind"; their esse is percipi. But this, Berkeley held, is no real paradox. For the mind of God is present always and everywhere; all ideas are always in the mind of God, and it is by direct communion with His mind that human beings are supplied with the ideas that make up their experience. It is literally true that "in Him we live, and move, and have our being." Thus, the reality of the everyday world is secured by being made directly dependent upon the mind of God; and the notion of "matter," the foundation of the scientific world view, is simply rejected.

This conclusion, of course, forced upon Berkeley the problem of the true status of science. He held that the current physical theories could not be literally true, for he denied the existence of what they purported to deal with. At first he was inclined to hold that much should be rejected as mere confused nonsense; but in De motu and later writings he developed a pragmatic view of science as a useful "fiction," a body of suppositions, mathematically convenient, but to be sharply distinguished from statements of actual fact. This view, which was unique and boldly original in his day, became increasingly current as difficulties in the literal interpretation of physical theory became more prominent. The idea is independent of, though certainly convenient for, Berkeleian metaphysics, and has commended itself to many who would regard Berkeley's general position as untenable.