Who is the Green Man ?

He is the Green Man, Cernunnos, the Horned One, Jack in the Green, Green George and the Old Man of the Woods.

He is the archetypal male essence, the thrusting life force, the potent initiator whose body is wild nature itself, the vitality of the forest merging with man, and many other things besides.

From deep in our past

His roots are deep in our past. Look into his eyes, and quickly look away again, for in gazing on his face we sense that something old and strong and tremendously powerful looms just behind his leafy mask.

And we are right. Behind the sacred oak, the Green Man is death and resurrection, he is the ebb and flow of life and creativity.

The Green Man is everywhere

Both Ancient and Modern

The Green Man appears on second century Roman columns in Turkey and in Jain temples in Rajasthan.

He is found all over England, some parts of Wales and Scotland and a few rare places in Ireland.

He can be seen in Germany, France, Italy, Holland, Spain, Hungary and Poland.

You can also see the Green Man in his modern role as a bringer of fortune on the walls of banks in Sydney, New York and Chicago.

When you see the Green Man you will know him

When you come upon the Green Man for the first time you will recognise him, for you have always known him.

You will see him carved in stone or wood, on stained glass and in illuminated manuscripts, as a face, often grotesque, with foliage sprouting from his mouth, nose, eyes or ears. Sometimes he may be a face composed entirely of leaves.

In churches both old and new, you find him on capitals, corbels, choir stalls and roof bosses. Indeed, on any surface open to ornamentation, the Green Man peers out from his mask of foliage.

The Green Man is both a symbol of fertility and the power of the forest, the Horned god and the god of vegetation.

These days, the imagery of horns can be disturbing for those of us raised in Christianity, but the ancient Horned god is not the much later Christian concept of the devil.

In antiquity, horns were a symbol of power, fertility and virility. Visualise the great stags in the wild woods, the bounding rites of Spring, the sympathetic magic that transfoms the mighty antlers into a symbol of male potency.

You find The Green Man in Churches

Like other early deities, the Green Man has been christianised, trivialised and made palatable but his image lingers in our psyche.

This is why he appears in so many churches - by incorporating such a strong pagan symbol, its power was, in some way, absorbed by the new religion, and its potency as a symbol in its own right substantially diminished.

Images of the Green Man 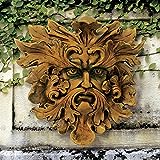 Is he a version of the Green Man?

Perhaps you first met the Green Man through the Arthurian legends.

The Green Knight is a mysterious, supernatural creature who rides into Arthur's court on New Year's Eve. He is in stark contrast to the court, symbolising the wildness, fertility, and death of the primeval world, while the court symbolises an enclave of civilisation within the wilderness.

The Green Man for your Home

The Green Man is an ancient symbol of nature and fertility and wildness, whose leafy image can be seen today on buildings and in artwork from various cultures all over the world. 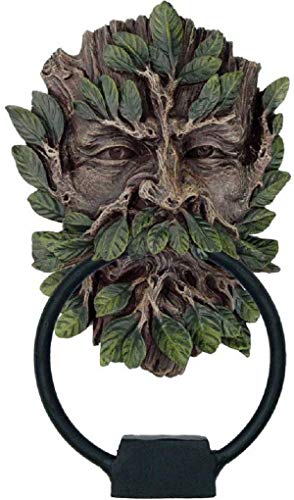 Celtic Greenman Green Man Door Knocker
The first thing a visitor sees as they reach your door - the power of the Green Man. Let his leafy image provide an ancient welcome to your home
Buy Now 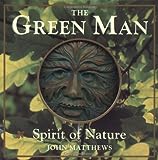 The Green Man: Spirit of Nature
A uniquely crafted plaque depicting the Green Man in his benign guise completes the package of this little book. The plaque will provide a whimsical touch of nature in the garden, on the patio, or in any room in the house.
Buy Now

Robin of the Greenwood

Another manifestation of the Green Man is as Robin Hood, the Lord of the Merry Greenwood. Not the Robin and Sheriff of Nottingham stories, but an older and more powerful figure upon which the Robin of Loxley figure was grafted much later.

Robin Hood was a Lord of Misrule as well as the King of the Wood. His lady was Maid Marion and the Merry Greenwood and Merry Men were transformed to Mary's Greenwood and Mary's Men. The Morris Dancers, who dance on May Day, derive their name from Mary.

The dancers follow ancient, pre-Christian steps and, when they leap into the air, they are a symbol of Life triumphing over Death.

Folk Customs around the Green Man

Book : Walking with the Green Man

Walking With the Green Man: Father of the Forest, Spirit of Nature
Whether as a man amongst the trees, a man of the trees, or a symbol of Nature used to express secrets and solidarity, the Green Man's visage is traced throughout lands and cultures.
Buy Now

Folk customs occur in various places in Europe where a man dressed in foliage is ceremonially 'put to death' to bring about regeneration.

In Britain, ancient customs are still enacted with Jack-in the-Green 'executed' to 'renew the world' at Beltane (1st May) to celebrate the coming of spring and the rebirth of the earth.

Look for the Green Man

Watch carefully where you go, the Green Man is everywhere. Look around, and you will see him, for Nature needs, and welcomes, the vitality of the Horned One

Have you seen the Green Man?