Claude Adrien Helvetius (1715-1771) was a French writer and philosopher. His ethical and social philosophy helped shape the school of utilitarianism later made famous by Jeremy Bentham.

Helvetius was born in Paris on January 26, 1715, the son of the chief physician to the Queen of France. In 1738 young Helvetius was appointed one of the syndicate of farmers-general in France, a position that carried with it enormous emoluments. He also held the position of maitre d'-hotel in the Queen's household. Helvetius resigned his post of farmer general in 1751, married, and settled down at his country estate at Vore in the district of La Perche, west of Paris. After the publication of De I 'esprit (1758; Eng. tr., Essays on the Mind, 1807), his most famous work, he was forced to make three retractions and lost his position in the household of the Queen. In 1764 he visited England, and in 1765, at the invitation of Frederick the Great, he visited Berlin. He died in Paris on December 26, 1771. 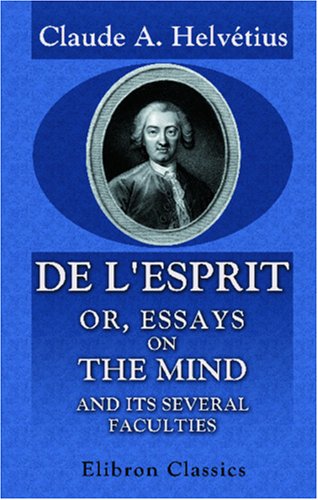 De l'esprit; or, Essays on the Mind, and Its Several Faculties: Translated from the French. To Which Is Now Prefixed, a Life of the Author
Buy Now

Helvetius asserted that man is motivated exclusively by the love of pleasure and the fear of pain. Everyone is inspired solely by self-interest, even when he seems to be (or even thinks he is) altruistic. All of man's mental faculties, even memory and judgment and the power of comparison, are simply a form of sensation. Thus everything in man, save his passions, comes from outside stimuli, and man's development depends exclusively upon his environment.

Helvetius believed that society's aim should be "the greatest possible pleasure and the greatest possible happiness of the greatest number of the citizens." He conceived of human nature as essentially passive and manipulable. His ideas implied that man has no free will and that there is no need to posit a spiritual element to explain thought processes. His posthumously published book De I'homme (1773; Eng. tr., On Man, His Intellectual Faculties, and His Education, 1777) repeated his earlier views on human nature and extended their implications.