Ida B. Wells A Passion for Justice

Ida B. Wells, Campaigner for Justice

Black history teaches us of many extraordinary figures who were leaders in their time. Ida B. Wells is among the very greatest.

I heard the name Ida B. Wells many times when I was growing up. I read that she was an anti-lynching campaigner, but I did not fully appreciate the immense courage and vision of this woman. .

Ida B. Wells was a woman of extraordinary talents, energy and vision. In an age when there were no computers, no internet, no Facebook, no fax machines, no text messaging, Ida B. Wells influenced many thousands of people. At a time when women did not even have the vote, Ida B. Wells had a huge influence on public policy.

Many of us speak about positive role models. However, it is not enough to list their achievements, we need to learn from their example.

"They Say": Ida B. Wells and the Reconstruction of Race (New Narratives in American History)
Buy Now

Southern Horrors and Other Writings; The Anti-Lynching Campaign of Ida B. Wells, 1892-1900
Buy Now 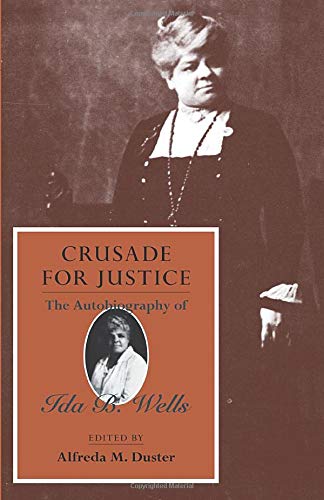 Crusade for Justice: The Autobiography of Ida B. Wells (Negro American Biographies and Autobiographies)
Buy Now

Ida: A Sword Among Lions: Ida B. Wells and the Campaign Against Lynching
Buy Now

The Life and Work of Ida B. Wells

Biography of Ida B. Wells

The documentary film Ida B. Wells, a Passion for Justice gives us many facts about the life and work of Ida B. Wells. This film was screened in London by Black History Studies. You can view a clip from the film below.

Born during slavery, Ida B, Wells grew up to lead many campaigns against lynching. She owned several newspapers and even campaigned internationally.

We need to learn from the extraordinary courage Ida B. Wells demonstrated. Despite the personal dangers she faced, she never stopped campaigning for justice.

What can we learn from her example? And how can we follow in her footsteps?

Black people are still being killed today in racially-motivated attacks. Many Black people die in police custody every year. What can we do to challenge and change this?

In the late 19th and early 20th centuries, Black men could be lynched for any reason or no reason. At public gatherings, Black men were lynched as part of the entertainment. There would be a carnival atmosphere at these events, where white parents brought their children along to watch.

Ida B, Wells campaigned tirelessly to end lynching and strengthen the anti-lynching laws. She could have been attacked and killed at any time, but she did not let that stop her. We need to learn from her example of courage and determination.

Wells even went to the White House to meet with the President, explaining to him why he needed to back stronger anti-lynching laws.

Ida B. Wells encouraged African American people to leave the South and head to Kansas and Oklahoma where they could become homesteaders. As a direct result of her work, six thousand African American people upped sticks and left, moving to places they had never been before, and where they didn't know anyone. If they owed money on their homes, cars, furniture or other items, they simply left these items behind when they skipped town.

Remember, this was a time when there was no TV, no Facebook, no Twitter, no mass communication of any kind. Ida B. Wells was able to achieve this through the influence of her newspapers.

Here are some of my other Black history lenses. They include a lensography.

Do You Think Like a Success?
Black Success Stories contains practical advice and suggestions. We are highly talented, highly skilled, highly gifted and highly successful. Black people a...

Black History Lenses
This lens lists lenses that explore and celebrate the history and culture of people of African heritage. Black history is a huge subject and there is always...

Video: Ida B. Wells, a Passion for Justice - Documentary on the Life and Work of Ida B. Wells

What have you learned from Black historical figures? How have they influenced your actions?

What Have You Learned from Black Historical Figures? - Please leave your comments below.