The Lady Who Loved to Party

Idina Sackville lived a quite extraordinary life. She was born into an aristocratic and privileged English family and lived most of her adult life in Kenya. In an age when appearances were all, she cared not one jot what people thought of her. She was an avid man-chaser to the point of nymphomania. She married five times and had three children whom she abandoned to live in Kenya.

Before seeing this lens had you heard of Idina Sackville?

Idina was born Myra Idina Sackville-West on 26th February, 1893, the eldest of three children of Gilbert, the 8th Earl De La Warr, and cousin of the writer Vita Sackville-West. Her mother, Muriel, was part of the Brassey family, one of the richest families in Victorian Britain.

Idina discovered early what divorce meant. When she was eight in 1901, her father deserted her mother and the family to run off with an actress. Her mother wrote numerous letters begging him to come back but to no avail and later the letters were published anonymously which caused the family great humiliation.

Her parents' marriage was dissolved the following year on the grounds of his adultery and abandonment. These traits would prove to be hereditary.

Idina was never a classic beauty but she grew up to be a slim, smart, blue-eyed magnetically attractive clothes horse around whom no man was safe, nor apparently wanted to be. In 1913, when she was 20 she fell in love with Euan Wallace, a 21-year-old Scottish Life Guards officer. Not only was he a handsome young bachelor, but he was exceptionally rich - the perfect match it would seem and at first their life together was idyllic. Idina bore two sons, David and Gerard, and when Euan was sent to France during the First World War, Idina would visit him and spend nights with him at the Ritz in Paris.

After the war, however Euan fell in love with Barbara Lutyens, the daughter of the famous architect Sir Edwin Lutyens. Idina made the decision to leave her husband. Leaving her men was to become a feature of her life and for which she got the nickname of "The Bolter". She had met a new love, Captain Charles Gordon, an old Harrovian, like Euan, and she quickly got a divorce in 1919 and married Charles. She left with him to start a new life in Kenya. But in leaving her marriage, she also had to leave her children - there was no question of being able to take the boys to Africa. Euan kept the children and in 1920 he married his new love, Barbera.

At this stage, before all this gets too complicated it is a good idea to give a resumé of the husbands of Idina.

Within weeks of arriving in Kenya, Idina's second marriage was foundering and the newly-weds soon split up due to Idina's new hobby of enthusiastically attempting to seduce every man in Kenya with a pulse. The newly jilted Charles later commented that,"Idina was a nymphomaniac."

Within a year Indina returned to England where she joined the bright young things in London of the early 1920s and made tongues wag with her habit of instructing hotel staff to fill her bath with champagne and of dancing on restaurant tables. She soon found a new husband, her third,- are you keeping up? - the English-born Scottish peer the Earl of Erroll (Josslyn Hay) eight years her junior, whom she married in 1923. The following year they sailed for Indina's favorite hunting ground - Kenya - where they intended to become farmers.

Idina And Josslyn Hay on their wedding day, 1923

Indina and Joss were not exactly shrinking violets in the adultery department. It appears that Idina had achieved the considerable feat of marrying a man who was more promiscuous than herself. In fact Joss began his new life as he fully intended to continue by having sex with one of the lady passengers on board ship on the trip out from England. Indina, on their arrival continued where she had left off in her determined assault on all available men between 15 and 80.

"The Bolter" - the famous book about Idina 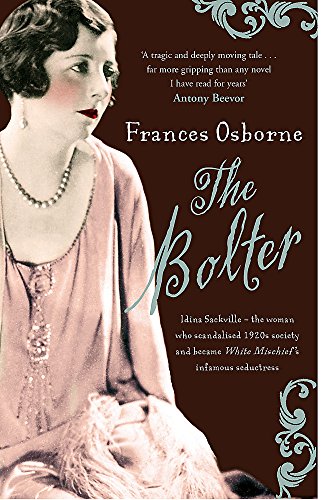 The couple set up home in a bungalow on the slopes of the Aberdare Range which they called Slains and began farming sheep, but the marriage was hardly built on solid foundations, even after Idina gave birth to a baby girl. Joss had no private wealth even after inheriting his father's titles in 1928 and he soon accumulated debts. Idina divorced him in 1930 after accusing him of cheating her financially. Joss immediately married his latest love and left Idina to her multiple affairs. Their daughter was unfeelingly sent to Southern England to be raised by Idina's aunt.

Indina was by now the leading light in the "Happy Valley" set which was an early sex, drugs and rock and roll cult, but without the rock and roll. This is a good time to give a pen picture of her fellow colonial players.

1] Hugh Cholmondeley, 3rd Baron Delamere. One of the first and most influential of Kenya's settlers. Famous for riding his horse and showjumping over tables in the dining room of Nairobi's Norfolk Hotel.

2] Josslyn "Joss" Hay, later 22nd Earl of Erroll. Yes, yes, we have already met him, but its worth reading on to his sticky end. After divorcing Indina and immediately marrying the divorced Edith Maud Ramsay-Hill Joss and his new wife continued the freewheeling lifestyle of drugs, drink and infidelity. It would cost them both their lives. In 1939 his wife died after drinking a cocktail of her own invention comprising alcohol, morphine and heroin. It never caught on.

In 1940 Joss began an affair with a married lady, Diana Broughton, the wife of Sir Jock Delves Broughton, but this proved to be an adultery too far. On 24 January, 1941, after spending the night with Diana, Joss was found shot dead in his car just outside Nairobi. Sir Jock Broughton, hitherto an enthusiastic member, with his wife, of the Happy Valley swingers circle, was tried for the murder but was acquitted. By chance, his barber was foreman of the jury. Diana Broughton had already taken another lover and Sir Jock returned to England. A year later he committed suicide by poisoning himself. One of the other suspects in the murder was the next person in our list:

Idina and Alice in Kenya

Proving that Idina wasn't the only predatory female in Kenya's social set was Alice de JanzÃ©, who became one of Idina's closest friends. She was born Alice Silverthorne in Boston and became one of the most prominent of America's social butterflies. She married the French Count de Janzé and in the mid 1920s the couple joined the Happy Valley crowd and became neighbours of Idina and Joss. Alice soon began a very public affair with Joss with Idina quite happy to unselfishly share her husband.

Alice had many other lovers, one of whom, an English nobleman called Raymond Vincent de Trafford, she shot in Paris in 1927, before turning the gun on herself. Both she and de Trafford survived and later married and subsequently divorced. I promise I am not making this up.

Alice's aim improved later in her life when she successfully committed suicide by shooting herself in September 1941.

This group contains some of the leading lights of the Happy Valley Set.

Idina is far left. We know all about her. she's looking a bit tired but that's understandable.

Alice (second from right) shot Raymond (second from left) in Paris railway station when he tried to end their affair. She then shot herself. They both survived and subsequently married and divorced each other. Alice had a twenty year affair with Joss (far right) who was married to her best friend Idina. When Joss was shot to death in his car just outside Nairobi in early 1941, Alice was one of the prime suspects,and is believed to have confessed to the crime, but was never brought to trial. She committed suicide by shooting herself in December, 1941.

The Temptress: The Scandalous Life of Alice de Janze and the Mysterious Death of Lord Erroll
Buy Now

After her divorce from Joss came through, Indina selected her fourth lucky husband to cheat on. He was Donald Carmichael Haldeman, a hunter and member of the Valley Set. Unusually for Idina's husbands he seemed , after marrying her, less than enthusiastic about sharing his wife with the male half of Kenya. He was a man of action and began firing his shotgun at strange men he found around the marital home. Not surprisingly the couple separated soon after the marriage, although they did not divorce until 1938.

Idina was now able to let her fancy land on any man she chose and she chose often and usually without discrimination.

Eventually one of the men stuck and she of course married him. He was an RAF pilot called William Vincent Soltau whom she married in 1939 and who spent most of their marriage flying, in the Second World War. It was probably the best thing he could have done because Idina did not let up. As she got older she drank more and her choice of partners became ever more indiscriminate. She and Soltau divorced in 1946.

Poll - What do you think of Idina's life? - She tends to polarise opinion.

The story of Idina's life shows her to be:

The end of such a life is inevitably going to be sad. Idina finally met her eldest son, briefly before both he and her other son were killed in separate incidents in the war. Drink took its inevitable toll on her looks and the gaps between lovers became longer. One of Idina's last attachments, when she was well into her 50's, was with James Bird, a tattooed ex-sailor who apparently had a preference for his own sex. By this time Idina was so into drink that she didn't really care.

Morally reprehensible or a modern woman to be admired? Please let us know what you think.

I hope you enjoyed reading this lens as much as I enjoyed writing it. - If you have any comments, feel free to make them here.