Five yen (pronounced “en”) may not seem like a fortune, however it is considered a lucky charm in Japan. Roughly equivalent to one US nickel, the coins are composed of zinc and copper creating a dazzling gold hue. The 5-yen coin is about 1.5 mm thick and 22 mm in diameter, weighs 3.8 grams and has a central hole 5 mm wide. The current design was first minted in 1959, the front of these coins depict a rice plant growing out of water and the Kanji symbol for 5 yen. Their back is stamped with other Kanji characters, including the word “Japan” and the year of issue, separated by sprouts of a tree.

You can see three graphic elements in the coin representing forestry, fisheries and agriculture, the key elements of the Japanese first-sector economy. There is also a gear around the hole that represents industry. The coin is also the only Japanese coin in circulation that does not contain an Arabic number on either side. Other Japanese coin with hole is the 50-yen coin.

As a result, people like to give five-yen coins as donations to Shinto shrines. It is also widely believed that putting a 5 yen coin in a wallet before putting any other money will attract good luck. People can carry them in their pocket, purse, wallet or wear it on a chain or ribbon (the handy hole in the coin’s center makes this easy). Sometimes new wallets are sold already containing a five yen coin inside. In order to develop better karma, people like to donate five yen coin at religious places.

Following the nuclear accident at Tokaimura, Ibaraki on September 1999, physicists Yoshinobu Koizumi and Masuchika Kohno showed that this coin could be used for estimating neutron dosage to the effetced surrounding population by measuring the zinc isotope ratios. These coins were chosen for monitoring neutron exposure because they are widely circulated and the zinc content is precisely controlled. To obtain a record of the dosage of neutrons, the exposed coins were collected from people’s houses at distances 100-550 m from the facility. Their results indicate that people evacuate to 350 meter outside the irradiated area still received a significant neutron dose.

Coins with holes were harder to counterfeit, they were also cheaper to make as they didn't need as much metal for a coin with a hole. Since minting technology improved so much, many countries decided that the cost of pproducing the hole outweighed the advantages. However, according to an official at the Bank of Japan, Japan has no plan to eliminate the 5 and 50 yen coins with hole at their center. It is said that holes make them easier to distinguish those coins from others, especially for those with visual impairments.

The first modern Japanese coins made with holes was the 5-sen coin, released in 1917. The brass 5-yen coin you probably have in your wallet was first minted in 1959 and the 50-yen coin you see now is made from an alloy called cupronickel and they have been around since 1967. Actually there was an earlier all-nickel version issued in 1959 and now they are rarely seen but still accepted today. 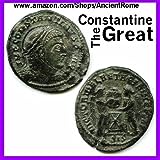 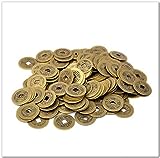