Lisa Marie Gabriel is a poet, composer and multi-genre author who lives and works in Lincolnshire and is not Anne Rice although she is good.

Ice Cream in the Ancient World

On a hot day there is nothing nicer than ice cream and what would we do without it, but could ice cream be made in Ancient Egypt? Sitting in a hot room in the midsummer heat led me to wonder more about ancient peoples and whether Tutankhamun or Cleopatra could have indulged the odd Ben and Jerry's craving. It is known that the Chinese had ice cream, that the Romans knew how to create sorbet too. Nero undoubtedly nibbled on an ice between fiddling tunes to the accompaniment of a burning Rome. How could ice be made in a hot dry climate? How could ice cream be made by ancient people?

After a little research, I discovered to my delight that the technology of ancient Persia, Rome and Egypt would have been up to the task - if you had the money and resources of course. Even more interesting were the alternative technologies for air conditioning and refrigeration without using electricity!

Image adapted from the Creative Commons image on wikipedia:

How did the Ancients get their ice?

Received wisdom has ancient people importing ice from overseas or mountain tops and storing it as long as they could in ice houses. This made ice an expensive luxury... Even articles I read while researching this insist the Romans could not make real ice cream! This is a statement I doubt fervently, since they were clever enough to do virtually everything else we didn't discover until the 19th century... But wait! Ice could easily be made in the deserts of ancient Iran or Egypt. Both the Romans AND the Persians knew exactly how, and doubtless the Egyptians could do it too!

The ideal conditions for making ice naturally exist in intercontinental deserts where temperature changes are extreme, especially in Winter. The basic principles revolve around heat exchange and evaporation. The great deserts in the middle of continents can be viciously hot in the day time and freezing at night. There is no day time cloud cover for insulation and little shelter. The Romans knew how to make ice in these conditions and the ancient Iranians could produce on an industrial scale with their wisdom.

The Romans would dig a pit which they would line with tightly packed straw. Into this, they would place a container full of water. The straw would act as insulation keeping the heat in and encouraging evaporation at night. They would cover the hole with shiny metal shields to reflect the sun and prevent the water just evaporating in the day. At night, they would remove the shields and the cold desert temperature combined with the warm water evaporating would lead to ice forming around the edge of the container. This could be collected up and and stored, the process peaking at 3 or 4 in the morning.

The ancient Iranians were even better at it. They used an amazing system for production on a large scale. The ancient Iranian (or Persian) ice builder consisted of a huge pit. This pit would typically be 10 to 15 metres deep. Within this pit, shallow rectangular lagoons were built from brick. They were 10-20 meters wide and a length some one hundred metres long stretching from East to West. A tall mud brick wall on the South side of the lagoons kept the sun from striking the water directly at sunrise and sunset which were critical times in the process. Two shorter walls were built at the East and West ends.

Radiation from the sun would heat the water and evaporation at night would cause ice to form, quantity depending on the time of year, which could be broken and stored in an ice house in the morning!

It could be great fun to make your own ice cream without electricity. The basic requirements are a metal container inside a wooden container full of ice and salt. This melts the ice and produces super cooled water which freezes the ingredients inside the metal bowl. Constant churning keeps the mixture soft rather than solid! 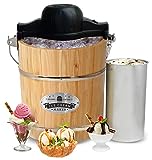 Maxi-Matic Ice Cream Maker, 4-Quart, Pine
An old fashioned approach to making ice cream The history of churned ice cream goes back many centuries. You can use this as a manual ice cream maker, or cheat like crazy and plug it in!
Buy Now

Could Cleopatra have enjoyed a Ben and Jerry's? - Did the technology allow for ancient Egyptian ice cream?

Could Cleopatra have enjoyed ice cream?

Yes, why not, ancient people were a lot more imaginative and creative than we give them credit.

sierradawn lm: As an armchair Egyptologist for the past 20 some years, I thought I knew everything but I am blown away by your lens! I had never even thought of this before. Thoroughly enjoyed my visit here to your lens. Thank you!

Namsak: Yes they could - I have heard of this already. The old ones weren't as dim as we sometimes think.

poppy mercer: I'll bet she did, and I bet it was flavoured with rose water.

TanoCalvenoa: Sure, why not? If she ever traveled somewhere cold.

lesliesinclair: I guess so. They were darn clever back then, as evidenced in their skill in developing the process to make ice.

Gregory Moore: It sure sounds like it could have been possible. I wonder what they preferred, Cookies and Cream, or Rocky Road?

Ellen Gregory: Yes, but she would have to eat it quickly or in an ice house.

Peter Badham: Seems likely enough to me, they were pretty advanced

Barbara Walton: Sounds as if they could.

Nah! Don't be silly. You can't have ice cream without electricity!

Well, I see that wasn't a problem was it?

How could the ancients keep ice from melting?

The windcatcher in middle eastern architecture

For a more comprehensive article, go to the links listed BUT using a windcatcher system, or a clever heat exchange system, made air conditioning not only possible, but prevalent in ancient Persia. The ancient people's of Greece, Rome, Egypt and Persia were in contact by means of both trade and conquest and some extremely clever technology existed to create frigid temperatures in desert conditions.

Today some of these techniques have come to light and are being marketed as carbon-neutral technologies for temperature regulation and air-conditioning in homes, stadiums and schools. To me, it is amazing not just how the observations of Nomadic tent dwellers on how air behaved led to purpose built buildings with natural air conditioning but also how we were so busy sending our limited natural resources up in smoke and pollution that we failed to see the ancients had a much better way of doing it!

So, forget the mountain snow wrapped up in straw, the Romans and the Persians knew exactly how to make ice in the desert and they knew how to make efficient, air cooled ice houses to store it in!

A diagram showing the principle of a malqaf or windcatcher for natural ventilation in traditional arabic architecture, 12 May 2010, Own work by Fellanamedlime

Ice Houses of Iran - A study by Hemming Jorgensen

Ice Houses of Iran: Where, How, Why (Bibliotheca Iranica: Archaeology Art and Architecture)
A great study on a little known subject that is fascinating!
Buy Now

An exercise in imagination...

Or simply wishful fantasy from a melting Summer brain?

The world is not going to stop turning on whether or not my page is historically accurate. I do know my grandmother, Marge, talked about pheasants being kept in a tin box in an insulated pit in the garden of the house where her mother was cook and housekeeper. I found the idea quite revolting at the time, but it seems the hole in the ground variety of refrigerator was actually used for centuries even though it didn't make any ice. That is fact, and where we go from there is personal to our own interests.

I have to confess this page is not meant to categorically state that Cleopatra DID have had ice cream made for her. There is no way we will ever know that of course. However, it is not beyond the realms of possibility that she COULD have enjoyed ice cream courtesy of Persian ice builders, Middle Eastern wind catcher type cooler towers, and plenty of handsome Nubian slaves to churn the asses milk, rose water and honey in huge containers filled with ice and salt.... What do you think?

Ever wondered why ice cream is called dessert? - Perhaps this page will help?