Dr Martha Elizabeth Rogers was a visionary thinker. She was a nurse, a researcher, a theorist, a teacher, and a writer.

In 1970, she published "The Science of Unitary Man" which revolutionized nursing. Her nursing theories, as put forth, were a new way of thinking about human beings, and about how human beings interact with each other and the environment around them.

These same theories are being explored today through the science of physics. I have discussed Martha Rogers' "Science of Unitary Man" more thoroughly elsewhere.

This is Martha Rogers' story.

Martha Elizabeth Rogers was born on May 12th, 1914 in Dallas, Texas, the oldest of four children. Her family greatly valued education and she was encouraged in this.

The family moved to Knoxville, Tennessee at some point in her early years. There, in 1931, she began undergraduate studies in pre-med science at the University of Tennessee with a goal towards entering medical school. She was discouraged from this, however, due to her gender and entered nursing school at Knoxville General Hospital instead, receiving her nursing diploma in 1936. She completed a BSN in Public Health Nursing from George Peabody College (Nashville) in l937.

She received a MA from Teacher's College Columbia University in 1945.

Martha Rogers was one of the first nurses in the USA to obtain a Master's Degree and then a Doctorate.

I took the science-med course. It was more substantial ...

and included more science and maths.

When Martha Rogers obtained her BSN she entered public health nursing and worked in rural Michigan for 2 years.

After receiving a MA she first worked in Hartford, Connecticut where she advanced from staff nurse to acting Director of Education. From there she went to Phoenix, Arizona where she established the Visiting Nurse's Program and served as director until she returned east to continue her education at Johns Hopkins University.

She received her ScD from Johns Hopkins in 1954 and was appointed Head of the Division of Nursing Education at New York University. She remained there for another 21 years, retiring in 1975. Her strong background in science helped to develop the nursing program at NYU as a distinct body of scientific knowledge.

In 1979 Dr Rogers was made Professor Emeritis at NYU.

Retirement did not slow Martha Rogers down at all and she continued to lecture around the world on the Science of Unitary Human Beings as well as helping to develop and expand the nursing program at NYU.

Many of the books written by and about Dr Rogers are no longer available or are difficult to locate. These are a few that I have found. 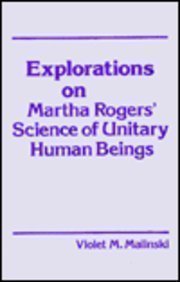 Martha E Rogers: Her Life and Her Work
City University of New York. Professional and personal history of contemporary pioneer, Martha Rogers, her contributions to nursing education and nursing research and her theories on space nursing and the Science of Unitary Beings. 9 U.S. contributors. DNLM: Rogers, Martha E.
Buy Now

"I thought nursing was a knowledgeable endeavor, and that nurses should be baccalaureate prepared and more. We exercised freedom and autonomy. We were responsible for our own acts. We were never accountable to other disciplines; that accountability would have jeopardized our autonomous position"

She also edited a nursing science journal in the early 1960s and was on the editorial board for Visions: The Journal of Rogerian Nursing Science from its inception in 1993 until her death in 1994.

I had the opportunity to meet and speak with Dr Rogers before her death. She was a remarkable woman.

Martha Rogers and the stars above

Dr Rogers' work continues even after her death

Martha E. Rogers died March 13, 1994. She remained active in several nursing organizations, lectured, and was on the editorial board of Visions: The Journal of Rogerian Nursing Science until then.

In Ursa Major, there is a star (RA 9h 33m 56s D 48Â° 9') named after Martha E. Rogers. This star is an enduring symbol of the luminous glow of her life and contribution to nursing serving as a beacon illuminating all that nursing is and aspires to be.