Baseball, America's game, but it didn't just get invented out of the blue, Baseball evolved from earlier games. Rounders is a well known game in the British isles, and it is not much different from Baseball, Cricket is another game similar to baseball. Most experts agree Baseball is the bastard child of both Rounders and Cricket, but if you look even further into the mists of time you discover another sport, older than either, that sport is Stoolball. 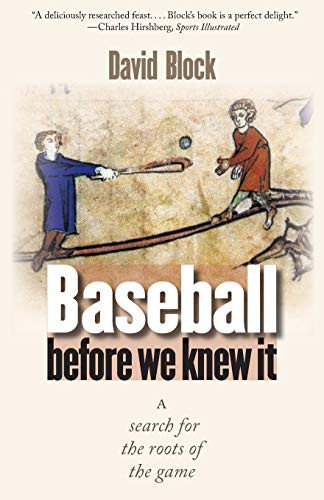 Baseball before We Knew It: A Search for the Roots of the Game
Buy Now 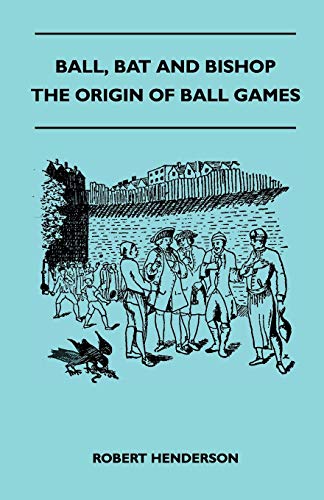 The History of Stoolball

Possibly earliest written record of Stoolball comes in the form of a warning not to play it in churchyards from 1450. John Myrc repeats the warnings of another Vicar from the early 1300's "Bats and bares and suche play/Out of chyrche-yorde put away" (Henderson, Robert W., Ball, Bat and Bishop: The Origins of Ball Games, 1947). In work by Myrc, Myrc or some other person, repeated the warning, but added the a list of banned games including "tenessyng handball, fott ball stoil ball and all manner other games out churchyard" (Block, David, Baseball Before We Knew It, 2005), stoil ball is clearly stoolball. While Myrc's work certainly predates any definitive mention of Stoolball it is hard to state outright that this is the first mention since David Block mentions that it appears that the list was added by another author, but it certainly is a clear case for showing that Stoolball was played during this time, and was popular enough to state, with considerable authority, that it had been played for some time in the area. Shakespeare referred to Stoole Ball in his 1634 Jacobean comedy "The Two Noble Kinsmen", which he co-wrote with John Fletcher, in the play the Jailor's daughter suggests to a wooer that they should "play at stoole ball" (Shakespeare, William and Fletcher, John, The Two Nobel Kinsmen, 1634).

Stoolball appears to primarily be a sport of the common folk, not the nobles. Though there is no clear historical evidence one way or another. Myrc's writings are a warning to the masses aimed at the peasants not nobility, in Sussex stoolball is very much a game of the people. So if you use tradition and Myrc as a starting point the assumption of Stoolball being a peasant game from Sussex seems to stand up.

I am currently writing a book about medieval sports and games. Come check out the details here or check out my Indiegogo campaign about the book and purchase an advanced copy. Learn more about stoolball, tennis, football, medieval board games, and so much more.

How To Play Stoolball

Honestly no one truly knows how stoolball was played medievally. While in England there are many who play the game, the fact is there was a huge gap in the playing of the game and no one can say if the game they play now is anything like it was played. Modern rules can be found on the internet in a variety of places, however I know of know one who has found any definite source for the medieval game so I present to you a plausible version of the game. I have played the game many times while reenacting at SCA events, and its always popular and always goes over well. The rules as I lay them out here are pretty straight forward and fit with everything we know about stoolball in the medieval ages.

To play stoolball you need a bat, there are no extant examples of a stoolball bat known, so make your own up, or use a cricket bat, or use a modern stoolball bat which looks rather like an oversized pingpong paddle or a wooden bread paddle. You need at least two things to use as stools which act as bases. You also need some balls, extant balls are plentiful, they were generally leather and stuffed with rags, dried grass, or feathers.

The object of stoolball is simple, get the most runs. A run is a completed circuit from homestool around all the other stools in the agreed upon direction. Unlike baseball you don't stop running after one run if you have not been tagged out, you keep running so the number of runs you can score off a given hit is unlimited.

Rules of the game

The rules to stoolball are simple and flexible. Every time I play I sit down the two team captains and we have a "rules debate" to agree upon the rules for the game, this normally takes no more than two minutes as long as the captains know how to play in the first place or the the general rules have been described to them and the optional rules outlined. Having the rules debate adds to the fun of the game I find and makes the teams more engaged.

Setting up the Field

The field is laid out pretty much however you feel like it, as I said before the rules are flexible and part of the fun is varying the game every time you play, but there are some things which do remain constant. You must have one "homestool" and at least one other stool. There must be some way to mark where the batter stands which must be at least two feet from the homestool. The other stool(s) are laid out however you wish, keeping in mind that the runners will be running around them, you don't want to space them out so far that the runners have the arduous task of running a marathon after each hit. A short run means a high scoring game, and a long run means low scoring. You can easily set it up to mimic a baseball diamond, but I would say that that is the absolute largest size you should use, even that size makes it really difficult to score, trust me on this.

The basic rules to the game are simple, stoolball is a team sport where two teams face off to try to score as many runs as possible. The team sizes are flexible, but you want to ensure you have the same number of players on each team.

Generally when planning a tournament or game I state that a team can be any size from 3 to 11 players, you can really play with as few as two players on each team, but three or more makes it more challenging. When the teams show up we determine the number of players allowed to play at a given time is the minimum team size of the two teams playing, so if you have one team of six and another of ten the players on each side is six and the team with ten has four substitute players they can swap out at any given time, of course this gives a slight advantage to the team with ten players, but that seems to be the fairest method, and generally everyone is fine with this, although you could opt to have four players only ensuring that each team has a couple substitutes, so the team of six would have two subs, and the team of ten would have six subs.

One team must be chosen to be at bat first, and the other to be fielding. The team fielding must have one bowler at least, all other positions can be determined by the team, the bowler (aka pitcher) will be bowling the ball towards the homestool, the batter from the other team will be standing at the batting line which is in front of the homestool defending the homestool with his bat. If the ball touches the stool without first touching the ground the batter is out, if the batter makes contact with the ball in any way it is a valid hit and he may run, there is no fowls in stoolball all hist are legal. The batter continues to run around the stools until his is out.

To get a runner out the fielding team must hit the stool with the ball from behind the batters line without hitting the ground, of course there is the possibility that a bad hit from the batter hits the stool, this counts as an out if the ball did not hit the ground first.