The Periodic Table in Song Form

Why, Tom Lehrer, why?

In 1959, why did Tom Lehrer record a song of all the known elements of his time based on the tune of the Major-General's Song from the opera The Pirates of Penzance by Victorian musical heavyweights Gilbert and Sullivan?

The Elements Song: Here is the song with visuals by Theodore Gray

The Elements Song on Amazon 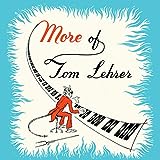 Going on His Elemental Journey

I originally thought Tom Lehrer was a chemist, but I found out he was a lecturer in mathematics and music theater. Born in 1928, he is still alive as of this writing but retired from performing in 1999.

That's a shame because I would like to hear his rendition of another long list of something.

I think Lehrer saw the periodic table and the practical (sometimes) and appealing way the elements were named and tried to match it to a song that could present it with wry humor.

There is something very appealing about the periodic table. Its visually grabbing. You could spend time daydreaming about what each element looks like and what it can do. You could spend even more time trying to figure out why its ordered the way it is. There is a long line of people throughout history playing with elements, spending endless hours using chemicals to break down materials to discover yet another more basic element. We've benefitted in so many ways discovering the practical use of elements like aluminum and chlorine.

A Visual Exploration of Every Known Atom in the Universe

Theodore Gray came up with a beautifully photographed book that was later expanded into calendars, posters and more. This is The Elements: A Visual Exploration of Every Known Atom in the Universe in paperback. There is a fantastic app for iPhone and iPad as well.

Being a music major in college, I had a study unit on opera. This included a side lesson on the boisterous comic operas written by W.S. Gilbert and Arthur Sullivan from Great Britain. Although the librettos were considered more 'light' than other types of opera, this Victorian Era music team came with heavy credentials in story telling and in music composition. They developed a style which evolved into what we now consider music theater.

Their operas have been performed and enjoyed and are still done today. Many times you find humorous parodies of the songs like Tom Lehrer's The Elements Song.

The main song in the video clip below is the original Gilbert and Sullivan song I Am the Very Model of a Modern Major-General.

The Modern Major General Song from the Pirates of Penzance

As written in his memoir Uncle Tungsten, Sacks came from a family of physicians and chemists. As a boy, Sacks had his own laboratory in the back room of his house and experimented to his heart's content (sometimes causing fires and mini explosions which got him in trouble).

He goes into detail about the chemical compositions he learned about as well as his family life and their trials getting through WWII in England. Although he became a neurologist, he retained his love of the elements and I read somewhere he even has a periodic table shower curtain! I also learned why element discovery can be dangerous. You have to expend a tremendous amount of energy and power to break down materials to their base elements (ex Marie Curie died of radiation poisoning due to her experiments with radium).

Who is Cool Enough to Sing This Song?

There is a popular talk show on British television called the Graham Norton Show. Daniel Radcliffe of Harry Potter fame took up the challenge and recited the entire Elements Song on National TV. Although it may have not interested some of his audience; I was very impressed.

I feel the same way about the elements as I do about boxes of paints or crayons or stacks of books. They're like candy with no calories. Right now my favorite element is still BISMUTH.Theodore Gray also developed an iphone/ipad app in which you can take an element and spin it around three dimensionally. It also has historical information on each element. I find it hard to explain why it is so cool, you just have to see it.

Why did he create this song? - He was a humorist and a music-loving math nerd. That's my kind of guy.