What's in a Word?

Why is "Voodoo" spelled different ways?

Is it Voodoo, vodou, vodu, Voudun, or vieux dieux? Okay the last one is a joke! Well, the spelling of Voodoo typically indicates the region of reference. Voodoo is common to the United States, while Vodou and Vodoun are the French spellings used in the Caribbean and Haiti. In all cases, Voodoo is a religion of magico-religious origin. Oh, and the latter is a little Nawlins humor!

Hoodoo is southern African American folk magic. Its main components are African folk magic, European folk tradition, and Native American Herbalism. At the core of Hoodoo are African folkloric practices such as crossing and uncrossing, using spiritual baths and washes, creating gris-gris bags, crossroads magic, and foot track magic. Some Hoodoo practitioners integrate elements of the Voodoo, and some do not. Hoodoo is not Voodoo, and Voodoo is not Hoodoo. They are different; yet, complementary.

Also present in Hoodoo are European and Kabalistic influences, ancestor worship, and strong elements of Christian and Jewish mysticism, such as the use of various seals and sigils. In fact, the Bible was considered a primary source for magical lore and the psalms became a key aspect of hoodoo practice. Sticks, stones, roots, and bones are the basic ingredients found in the Hoodoo's mojo bag.

You say VOODOO, I say HOODOO

Hoodoo and Voodoo are both practiced in Louisiana and have many things in common.However, there are differences between the two. Voodoo is a religion and Hoodoo is an African American system of folk magickal practice that has typically been handed down from generation to generation. Many Hoodoo practitioners in Louisiana are Roman Catholic and also practice some form Spiritualism or Spiritism. They do not typically invoke the loas (African deities) as in Voodoo, and instead may use Catholic Saints that represent the loas. This Catholic shroud is the result of a historical atmosphere wherein the only legal religion permitted in the state of Louisiana from the 1600s to 1812 was Roman Catholicism. It should be noted, however, that not all Hoodoo practitioners use the saints in their workings, nor are all of the Catholic. In fact, any religious associations or practices found in an individual practitioner's repertoire are entirely up to the individual and reflect that individual practitioner's personal belief system.

Hoodoo practitioners work with both hands - for good and evil or healing and "hurts." Some characteristics of Hoodoo magic include candle burning, the use of incense, spiritual bathing, crossroads magic, the use of Psalms from the Bible, and seals and talismans from the 6th and 7th book of Moses.

What's in a word? Well, the spelling of Voodoo typically indicates the region of reference. Voodoo is common to the United States, while Vodou and Vodoun are the French spellings used in the Caribbean and Haiti. In all cases, Voodoo is a religion of magico-religious origin.

The history of voodoo in New Orleans dates back two centuries, to a time when West African slaves arrived in New Orleans, bringing with them the ancient religion Voodoo that originated some 7,000 years ago. New Orleans Voodoo is a conglomeration of cultural and spiritual belief systems strongly influenced by the ancient Voodoo religion of Africa, the Vodou religion of Haiti, the healing arts of Native American people, the folk magic of Europe, and Catholicism. Voodoo is culture, heritage, philosophy, art, dance, language, medicine, music, justice, power, storytelling & ritual. It is a way of looking at and dealing with life. It heals and destroys, is both good and bad, simple and complex. Voodoo is open to all yet holds many secrets & mysteries to those who are uninitiated. There is no conflict between those who practice Voodoo and those who practice Hoodoo in Louisiana and they are perfectly complementary.

The word voodoo means "spirit of God." Voodoo believers accept the existence of one god, below which are the powerful spirits often referred to as Loa. These powerful spirits are responsible for the daily matters in life in the areas of family, love, money, happiness, wealth, and revenge.

Voodoo in America has its roots in the trauma of the African ancestors who were brought to the Caribbean in bondage. Christopher Columbus set the stage in 1492 for the development of Voodoo when countless Tainos were murdered in an attempt to enslave them during the colonization of Hispaniola. With a lack of indigenous people to function as slaves, and the cost of European servants prohibitive, the slave trade between West and Central Africa began (Long, 2000).

In 1697 the French acquired one third of Hispaniola and worked the slaves literally to death. The average survival rate of slaves at that time was only about 10 years. This made the slave population ripe for continual replenishment, and the slave population grew from several thousand to half a million. The slave population was extremely diverse with many different tribes representing many religions, languages, and belief systems.It is during this time of the French occupation that the basic structure of Voodoo as we know it today developed.

Voodoo from the Inside 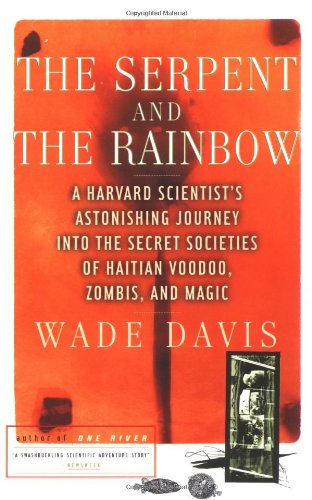 The Serpent and the Rainbow: A Harvard Scientist's Astonishing Journey into the Secret Societies of Haitian Voodoo, Zombis, and Magic
A scientific investigation and personal adventure story about zombis and the voudoun culture of Haiti by a Harvard scientist. In April 1982, ethnobotanist Wade Davis arrived in Haiti to investigate two documented cases of zombis—people who had reappeared in Haitian society years after they had been officially declared dead and had been buried. Drawn into a netherworld of rituals and celebrations, Davis penetrated the vodoun mystique deeply enough to place zombification in its proper context within vodoun culture. In the course of his investigation, Davis came to realize that the story of vodoun is the history of Haiti—from the African origins of its people to the successful Haitian independence movement, down to the present day, where vodoun culture is, in effect, the government of Haiti’s countryside. The Serpent and the Rainbow combines anthropological investigation with a remarkable personal adventure to illuminate and finally explain a phenomenon that has long fascinated Americans.
Buy Now

"The Science and Art of causing Change to occur in conformity with Will."

In The Lemegeton (Lesser Book of Solomon, the King), we find:

"Magick is the highest, most Absolute, most Divine Knowledge of natural Philosophy, advanced in its works and wonderful operations by a right understanding of the inward and occult (hidden) virtue of things; so that true agents being applied to proper patients, strange and admirable effects will hereby be produced. Whence magicians are profound and diligent searchers into Nature; they, because of their skill, know how to anticipate an effect, the which to the vulgar shall seem to be a miracle."

According to the Webster English Dictionary:

"It is the art of producing a desired effect or result through the use of various techniques as incantations that presumably assure human control of supernatural agencies or the forces of nature."

Magick religions incorporate systems of magick within the religious philosophies but performing magick is not a requirement of the system.

According to Aleister Crowley:

"It should never be forgotten for a single moment that the central and essential work of the Magician is the attainment of the Knowledge and Conversation of the Holy Guardian Angel. Once he has achieved this he must of course be left entirely in the hands of that Angel, who can be invariably and inevitably relied upon to lead him to the further great step-crossing of the Abyss and the attainment of the grade of Master of the Temple." 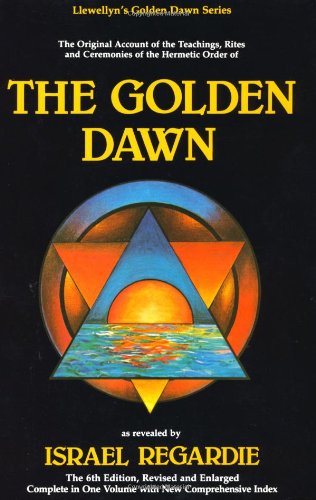 The Golden Dawn: The Original Account of the Teachings, Rites & Ceremonies of the Hermetic Order (Llewellyn's Golden Dawn Series)
The Golden Dawn by Israel Regardie is considered by many to be the book that started the modern occult movement. The original Hermetic Order of the Golden Dawn, which started in the late 1800s, borrowed from a wide variety of occult traditions ó Kabalah, Tarot, Geomancy, Enochian Magic, Theosophy, Freemasonry, Paganism, Astrology, and many more ó and created a unique and viable system of magic that is still being practiced today. Almost every contemporary occult writer and modern group has been influenced, directly or indirectly, by the Order or its members, making The Golden Dawn one of the most influential occult books of the past 100 years.
Buy Now

What is Ju Ju?

What is Lucky Ju Ju?

What is Lucky Ju Ju?

1. An object used as a fetish, charm or amulet

2. The supernatural power ascribed to such an object

Ju Ju on the Brain

What is lucky ju-ju? A JuJu is a blessed object that is said to keep evil and negativity at bay. Ju- ju is any object used as a fetish, charm, doll, or amulet. It also refers to the supernatural power ascribed to such an object. A lucky Ju-Ju object can be used to protect the home, car, office, or anywhere you want to keep evil and negativity away.

Hoodoo Medicine: Gullah Herbal Remedies
Hoodoo Medicine is a unique record of nearly lost African-American folk culture. It documents herbal medicines used for centuries, from the 1600s until recent decades, by the slaves and later their freed descendants, in the South Carolina Sea Islands. The Sea Island people, also called the Gullah, were unusually isolated from other slave groups by the creeks and marshes of the Low Country. They maintained strong African influences on their speech, social customs, and beliefs, long after other American blacks had lost this connection. Likewise, their folk medicine mixed medicines that originated in Africa with cures learned from the American Indians and European settlers. Hoodoo Medicine is a window into Gullah traditions, which in recent years have been threatened by the migration of families, the invasion of the Sea Islands by suburban developers, and the gradual death of the elder generation. More than that, it captures folk practices that lasted longer in the Sea Islands than elsewhere, but were once widespread throughout African-American communities of the South.
Buy Now 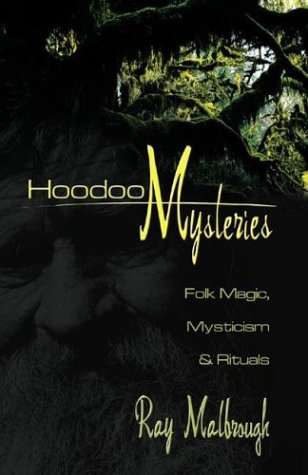 Hoodoo Mysteries: Folk Magic, Mysticism & Rituals
Conjuring money and attracting love, reversing hexes and stopping slander-it's all in a day's work for the Hoodoo practitioner. This is true American folk magic, colorful and powerful, yet little-known outside of the bayous and backwoods of Louisiana.
Buy Now

Reader Feedback - I want your opinion!