The Major Moons of Neptune

Neptune, the beautiful deep-blue icy planet found by mathematical prediction, instead of mere observation, has three major moons orbiting their father planet. Here we will learn the secrets of Triton and what little is known about Proteus and Nereid.

Triton was discovered on the 10th of October, 1846, by William Lassell. It is the largest moon with a retrograde orbit and the 7th largest moon in our solar system. Triton is very similar to Pluto, and is made of water-ice, rock, metal, and a frozen nitrogen crust. It is geologically active with geysers dotting it's crust. Triton is also believed to have a nitrogen atmosphere with small amounts of methane.

Triton orbits in synchronous rotation about Neptune, meaning it keeps one face oriented toward the planet at all times. Triton is tilted 157 degrees on its axis, and also orbits Neptune in an almost perfect circle. Because of tidal interactions between Neptune and Triton, scientists believe that in a few billion years Triton will eventually orbit close enough to Neptune to collide with the planet, or break up and become rings similar to those of Saturn.

Some scientists believe that like our Earth, Triton's interior consists of a solid core, a mantle, and a crust. There may be enough rock in Triton's interior that solid-state convection may be occurring within its mantle, powered by radioactive decay. If so, there may be enough heat for a "subterranean ocean" to exist, like that believed to be underneath the surface of Europa. The possible presence of a layer of liquid water suggests the remote possibility of life.

Neptune's moon Triton has very few impact craters, and is geologically active with icy volcanoes and geysers whose processes are similar to the volcanic activity on Earth, except for the compositions of the lava. This volcanic activity is thought to be triggered by the Sun. Triton's surface features are a result of geyser and cryovolcanic activity. Triton's entire surface is made up of valleys and ridges mostly formed by internal geological processes instead of outer forces, such as impacts.

Triton's south pole is highly reflective giving Triton the coldest surface known in our solar system. Triton's nitrogen exists mostly as frost, with deposits containing methane ice reacting under sunlight to form pink or red compounds with dark spots of carbonaceous dust. The boundary of this frost can be seen in the image to the right. There is also a bluish-green band circling the equator which may be fresh nitrogen frost deposits.

Triton is currently unique in the solar system for it's cantaloupe terrain. The western hemisphere of Triton is covered with fissures and depressions which resembles the outside of a cantaloupe melon. This terrain is comprised of mostly dirty water, and is known to exist on Triton only. The depressions are believed to be from meteorites because of their similarity in size. Some believe this terrain may have also been cause by collapses or flooding caused by cryovolcanism. This particular terrain is believed to be the oldest part of Triton and covers nearly the whole western half of the moon.

Proteus is a Little Dense

Very little is known about Proteus, and one reason is that we just haven't known of it's existence for very long. Astronomer Stephen Synnott discovered the moon in the pictures of the Voyager 2 flyby of Neptune. It's discovery was announced on July 7, 1989, and it was named on September 16, 1991 after the shape-shifting god Proteus.

Proteus is the second largest moon of Neptune and scientists believe it is as dense as it can be without being pulled into the typical rounded shape by it's own gravity.

Proteus is heavily cratered and is the largest irregularly shaped known moon in our solar system. Because of it's ability to keep it's irregular shape, scientists theorize Proteus is made up of mostly rock, which can withstand the pull of gravity. It has a circular orbit around Neptune, and is heavily cratered. Proteus seems to be similar to Saturn's moon Phoebe, so some scientists hypothesize that the two moons were formed in the same area of the solar system, but were captured by the gravity of two different planets.

Capture the wonder of the universe in jewelry 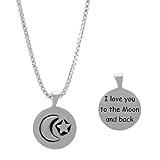 Sterling Silver Round "I Love You to the Moon and Back" Reversible Moon and Star Pendant Necklace , 18"
A beautiful sentiment inscribed in silver. Give someone the moon.
Buy Now

Poor Nereid is a bit Irregular

The best photos were taken in 1989 when Voyager 2 visited the Neptune system. These photos were taken from a distance of 2.9 million miles(4.7 million kilometers), so they show only the irregular shape of Nereid and no surface features could be seen from such a distance.

Nereid, you're so Eccentric

What is known about Nereid is gathered from the few photos taken by Voyager 2. One fact is that Nereid is about 14% reflective, making it twice as reflective as Proteus and a bit more reflective than Earth's moon.

Nereid also has a highly elliptical orbit, making it the most eccentric orbit of any known moon. It takes 360 Earth days for Nereid to complete one orbit around Neptune and is only about 812,000 miles(1.35 million km) away from Neptune at it's closest and a whopping 5.77 million miles(9.624 million km) away at it's farthest. Nereid orbits counterclockwise, the opposite of Triton, and in the same direction that Neptune turns on it's axis. Because of this unusual orbit, scientists speculate that Nereid may have been an asteroid or Kuiper Belt object. Nereid may have also been a fragment of Halimede, a smaller moon of Neptune.

Nereid is believed to be about 204 miles (340 km) in diameter. Scientists also theorize that the direction of it's axis shifts over time because the pull of gravity from Neptune changes at certain points in Nereid's highly elliptical orbit.

Learn More About Our Universe With These Sister-Sites

The Major Moons of Jupiter

The Major Moons of Saturn

The Major moons of Uranus

Our Earth's Satellite, the Moon