The Story of a Welsh Prince

The last Welsh ruler to hold the title of Prince of Wales was Owain Glyndwr, descendant of the Princes of Powys. During the 14th century, Owain Glyndwr led a campaign against English rule, but ultimately lost his cause.

In September 1400, Owain Glyndwr led the revolt against Henry IV of England and although he enjoyed success initially, lack of artillery and other factors led to his defeat. His strongholds were taken over and Owain Glyndwr disappeared in 1412, refusing to accept a pardon.

Both English and Welsh popular culture makes reference to Owain Glyndwr and he has been recreated as the founder of Welsh Nationalism and as a national hero in Wales.

The Early Life of Owain Glyndwr

Owain Glyndwr was born in the 14th century the son of Gruffydd Fychan II who was descended from the Welsh princes. His family were landed nobles from the Welsh Marches, the border between England and Wales. Owain's mother was called Elen ferch Tomas ap Llewelyn and her family were also of significant Welsh inheritance.

Owain is thought to have been sent to London as a young man, to study Law at the Inns of Court. However, by 1383, he had returned to Wales where he married Margaret Hanmer and started a family. He became the Squire of Sycharth and Glydyfrdwy.

For a time, Owain Glyndwr served the English Kings in garrision duties on the English-Scottish border, Scotland, and the South of England. He later returned to Wales following the death of his father in law, as executor of his estate. He lived in Wales with little event during the 1390s, enjoying the security of his stable Welsh estates for almost a decade.

The Banner and Flag of Owain Glyndwr

The origins of the red and gold banner carried by the Welsh into battle against the English are unknown.

Glyndwr's descendancy from the Welsh princes of Gwynedd is thought to be reflected in the banner, as their flag had previously displayed four lions, albeit passive ones. The rampant lions in Glyndwr's banner are a symbol of the stand he was trying to make.

There are further suggestions about the origins of Owain Glyndwr's flag, all of which relate back to his heritage and his place as the last Welsh born prince of Wales. 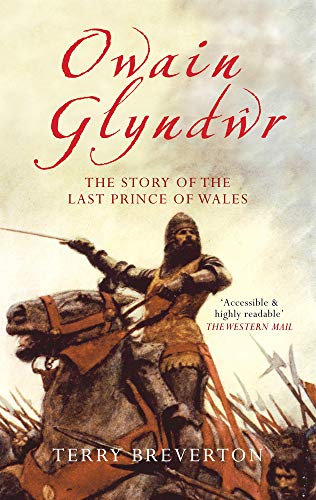 Owain Glyndwr: The Story of the Last Prince of Wales
Buy Now

Owain Glyndwr: The Story of the Last Prince of Wales

The survival of Wales as a nation was defined by Owain Glyndŵr’s 15-year battle. But little is known about him. Yet Glyndŵr is hardly known. Read about his invasions, successes, hopes for Wales and the mysteries around his disappearance to learn why his name inspires pride amongst the Welsh people of today.

Your opinion about Owain Glyndwr

Was Owain Glyndwr a hero or just a nationalist rebel?

Did you enjoy this piece of Welsh history? Please feel free to share your thoughts about Owain Glyndwr, or just pop in and say hello!

Owain Glyndwr Guestbook - Thanks for visiting!