If you went to the Arctic, what do you think you'd see? During our habit unit, my second and third graders would begin the morning by enthusiastically chanting that poem. They knew there was much to see in polar lands! If Ms. Frizzle had shown up with a magic school bus and a yen to head to the arctic, I think they would have wanted to grab their coats and be on their way.

Polar bears are invitation to the imagination, but it's not all flights of fancy, even at the primary or pre-primary level. There are a lot of scientific concepts that can be learned through habitat study, for examples, how living things interact together in systems and how they're adapted to their environments. Children need to learn about their own ecosystem, whether it's desert, forest, grassland, or riparian. They also benefit from learning about other ecosystems and comparing and contrasting them with their own.

The polar regions -- Arctic and Antarctic -- are among the most fascinating to children. They seem so exotic and otherworldly, and the animals have a cute, cuddly appearance that invites play (even if you wouldn't want to meet a real walrus in your neighborhood). They can be especially fun to 'explore' in the wintertime when children are captivated by (or yearning for) a snowy world.

If you're getting ready to start a polar unit study, you'll find a lot of lesson plan resources out there. Come along on a bit of exploration...

Any study of the polar ecosystem should include a discussion of how polar animals are adapted to their environment. This crucial topic doesn't have to be introduced through lecture -- or even through story. Even first graders can construct some of the knowledge for themselves. They can be asked to imagine they are going out into the frigid cold -- guided imagery can be helpful here! -- and then prompted to tell what they'd need for their journey. They'll suggest things like coats and gloves.

You can guide them in describing some of the attributes of those items: for example, waterproof boots or thick coats. Some children may have dress-up boots that aren't suitable for snow play, and they may recognize that the problem is that they aren't lined or aren't waterproof. (And for those that don't have the background experience, or readily make the connections, it can be helpful to bring in some clothing items.)

You can make connections between this background knowledge and the physical characteristics of Arctic animals. Children often find it funny that blubber -- yes, fat -- is a polar adaptation. It can be helpful to compare blubber to the outerwear that the children put on themselves.

Do children know why hats can make them feel so much warmer and more comfortable? They may be interested to learn that they can lose a lot of heat through our heads! Here again there's a polar region connection: The Arctic hare has shorter ears than a lot of its cousins do. That's so it won't lose so much heat!

Children can be challenged to think of a way that an animal's shape can help it preserve heat. Hint: You might mention that when children are really cold, they are more likely to curl up. Young children may not understand surface area to volume ratio, but they can understand that the Arctic hare's bunchy shape doesn't let as much heat escape.

They can also be challenged to explain why it might be helpful for polar animals to be white. There can be multiple reasons for camouflage. Predators and prey alike may be colored to blend in with their environment.

And then there are those part-time polar residents: Do the children know anyone who takes a trip to a warmer climate at some point in the year? Well, so do some cold weather animals! Some peregrine falcons migrate, spending only part of their time near the poles. Their bodies are well adapted for travel. They are fast fliers, and can catch -- and sometimes eat -- prey in mid-air.

Near the poles, animals have reason to retain their white coats year round. As we move south into areas like Alaska, we find areas where the ice and snow melt for part of the year... and where the animals that take on a different fur color during the fair months. The snowshoe hare takes on more of a rust color. The unit of study may be expanded to include these animals.

Incorporating the Common Core: Where Do Polar Bears Live?

Where Do Polar Bears Live? is a charming picture book that has been included as an exemplar text in the Common Core. It is an informational text at the 2nd/ 3rd grade level. Its inclusion in the Core doesn't mean that every student has to read it, but it does mean it's considered a good example of the type of nonfiction that students at this level should read and understand.

The text includes different nonfiction styles. It begins by "zooming in" on the lives of some representative polar bears; later we get scientific evidence about the impact of human activity on the species.

Where Do Polar Bears Live? (Let's-Read-and-Find-Out Science 2)
The book is available as a hardcover edition and also on Kindle.
Buy Now

Listen to 'Where Do Polar Bears Live'

You can listen to a preview of the book (and actually see the pages) at Watch, Know, Learn, an educational video site. You can also watch some related teaching videos, including one called "Polar Bears White? Not Quite". They have been selected by teachers to pair with the text and extend learning.

More Lesson Plans for the Magic School Bus in the Arctic

Remember building models with sugar cubes as blocks of ice? Kids have modeled habitats from many materials. Here you can view several. In "Peter's Arctic Diorama", the habitat has been constructed outdoors using real snow. (Ah, the things that can be constructed outside on a snowy morning!) Blue food coloring represents a layer of algae.

In the next display, we find some toy explorers and animals -- expensive probably, but scenic. We can also find some genuine kid-made Arctic dioramas here, including one where the polar bear has been created using modeling compound.

Whatever the selected material, it is important to show that the ecosystem is indeed a system. (Here are some things for children to consider: What do the animals need to survive? Where do they find shelter? What do they eat? Are different parts of the food web represented?)

How about a whole tube of polar animals? You may not want to invest the money for a diorama that's created and then shelved, but these animals can also be used for play -- which is, for young children, at the heart of learning.

This Wild Republic set has a five star rating. I believe it does mix Arctic and Antarctic animals. If you want to buy animals from one pole or the other, you may need to buy animal families separately through companies like Eco Dome or Schleich. Otherwise, you can just sort out the penguins from the polar bears and use them in separate projects -- that may be the more economical option. 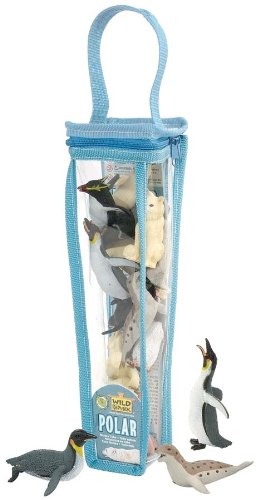 Here are guidelines for a diorama assignment that lets older kids showcase their learning: creative work displayed with map and written description.

Approaching the North Pole... your students won't find penguins up there.

This is another fun way for children to display their learning -- creating a digital product of polar animals, using Photopeach, Animoto, or another video creator.

Kids can add captions (in their own words!) to demonstrate their learning. They can also select mood music. They could focus specifically on adaptations, showing the same animal in different seasons and situations.

Explore the South Pole -- you won't find any polar bears down there!

Does Your Room Need Some Poles?

There are many different ways to create or model an Arctic habitat. It can be fun to turn your room into a little earth, with the South Pole on one end and the North Pole on the other.

How can a person get a moderately 'uniform' look while still allowing for creative expression? Lightly sketch the animals' outlines on butcher paper or other very large paper. Children can add the faces and markings themselves and cut the figures out. Some children like to consult books and resources to give their pictures realism. It does take a lot of space, but it's a fun center/ choice activity and can also be an option for children who have finished other activities. Some of my 2nd and 3rd graders really got into it.

There can also be an Equator in the middle if you are studying habitats in general. My room for two years was actually two mini-rooms that had a room divider which was pushed to the side. That made it easier to decide where the equator went... and decorate it a bit.

Mr. Popper's Penguins is a classic, and as such, it has some rather dated views about animal nature and environmental issues. It's true Mr. Popper makes a number of modifications to his home environment, even sacrificing his own comfort. Admirable! Mr. Popper is a nice guy, but the idea he gets sold on at the end...

Take those penguins to the North Pole? Can one take a colony of animals (even a chipper, cheery one) and set those animals down on the opposite end of the earth? Humans have brought populations of plant and animal populations to new lands many times, and it has caused some problems -- problems that weren't so well known when the book was written!

The book can be used as a springboard for developing critical literacy. The Common Core has it as a read-aloud for the K-1 band, but I personally would be inclined to use it with older grades, because I like how it ties it in with other areas of study -- areas that are above the first grade level.

There is a difference between doing a true multidisciplinary unit and just using a motif (e.g. bears or leprechauns) to engage children's attention or brighten up a drab room. Poems and art projects often fall more into the motif category of theme, but there is still learning to be done. Primary grade children become more fluent readers when they chant poems or do other choral recitations. Here are some polar poems to start your reading block.

These lesson plans either compare the two polar regions or develop concepts that are applicable to both.