A Rube Goldberg machine is a device that takes a simple task -- such as opening a door or putting out a candle -- as complicated as possible, through a series of interconnected steps that involve various kinds of force and motion. You piece together various items (often things easily found around the house) so that they interact with one another -- pushing, pulling, dropping, lifting, etc. -- toward your ultimate goal. When assigned as a school project, there are usually requirements on how many steps or parts the machine will include (the more the better) or how long it will take to complete its task (the longer the better).

I had little familiarity with Rube Goldberg machines until my older son had to make one for 8th grade science class. Depending on the teacher's requirements, it can actually be pretty challenging! It's a fun challenge, though -- fun enough that my son and his friend signed up for an entire class on Rube Goldberg machines the following summer, and enjoyed it.

What I like about Rube Goldberg machines is that they're not only good for problem solving and creativity, but also a nice breather from our speed & efficiency obsessed culture. At a time when everyone seems to want to do 50 things simultaneously at lightning speed, it's cool to make something that deliberately takes forever to do just one thing -- just 'cause you can.

Who was Rube Goldberg?

Reuben Lucius Goldberg was an engineer-turned-Pulitzer Prize winning cartoonist, known for his depictions of simple things done in complicated ways. He never actually built these machines, but he inspired countless builders worldwide.

~ In general, when planning your Rube Goldberg machine, it's best to start from your desired end result -- e..g., pulling a curtain -- and work backward from there, step by step.

~ if you have a deadline for completion, start early. Trial and error is a huge part of the process (and the fun) and can gobble up a lot of time.

~ Give yourself plenty of space, too.

~ If you're trying to make your machine without spending money, as we were, take some time to scan your house for promising items. Could this ruler be part of a bridge? That paper towel tube a tunnel? What might you do with marbles? string? a pencil?

Tools for your Rube Goldberg machine 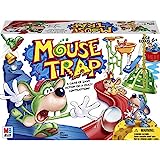 Mouse Trap Kids Board Game, Family Board Games for Kids, Kids Games for 2-4 Players, Family Games, Kids Gifts, Ages 6 and Up (Amazon Exclusive)
This is an awesome toolkit for a Rube Goldberg machine. If you're doing a school project, make sure to check with the teacher, though. My son's science teacher allowed only 2 pieces from a toy/game such as Mousetrap in the whole machine.
Buy Now

Making Things Move DIY Mechanisms for Inventors, Hobbyists, and Artists
Making things move -- my son's teacher required several types of force in each student's project -- is one of the big challenges in making a Rube Goldberg machine. This book can help.
Buy Now

Another must-see Rube Goldberg video that the kids & I have watched a few times! It never gets old....

Have you ever made a Rube Goldberg machine?

If yes, how did it work?