Why Rutgers? Rutgers is the "State University of New Jersey." Tens of thousands attend each year. It's a great place to go but before you make your decision keep reading!

A lot of things might have changed since my time at Rutgers University but I am a life-time member of the Rutgers Alumni Association. That means they often email me, asking me for donations.

More importantly it means that I get regular updates on a lot of things going on at RU. I also make time to visit the campus whenever I'm in New Jersey or New York, which is at least every other year.

I graduated from Rutgers University with a BA in English Literature. I loved my experience at Rutgers and I'd do it all again if given the chance. But this isn't about me; it's about you.

Finally, I'm not selling anything (but feel free to share this article with others). Where you go to college or even if you decide to go at all is your choice. It's not your parents' choice or anyone else's--only yours. Just remember, like everything else in life, college is what you make it!

Rutgers: Hear it from an alum

There is no "New Jersey State," or "NJU." Well, there is but the official name is "Rutgers, the State University of New Jersey." Classy, right? You can find out a lot about Rutgers or any other university on Wikipedia or on the school's website. I've provided the links below. Take some time and look around both and you'll find out a lot. What you won't find out is a brief, honest review. Dollar for dollar: is this place for you?

While looking for materials on Amazon that can help your decision, most of what I found was Rutgers apparel. You don't need that. I didn't buy any of it while I was there. Wait, that's not true. I bought a T-shirt early on. I still have it.

If you think college is an investment then you'll want to get your review from someone who has already put in the time and money and has been reaping the rewards ever since. That's me.

What do you want? Why are you going to college? 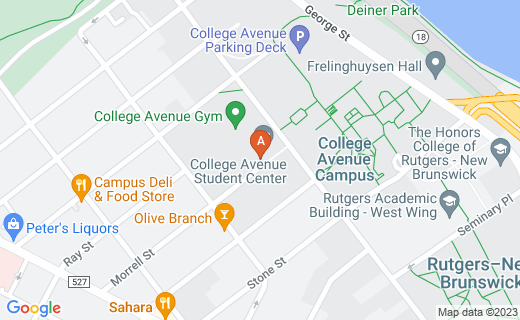 This is vital in any decision you make: what do you want? I went to college for the worst reasons: my friends were doing it, my parents were expecting me to and I didn't have anything else to do. I didn't know what I wanted to be when I "grow up" but I believed that going to college would give me an advantage when I figured it out. Thankfully, I was right.

I was adamant in getting a Bachelor's degree but not as passionate about paying the tuition of a private or out-of-state school. Since I lived in New Jersey at the time, Rutgers University seemed like the default choice.

Lucky for me, as an English major, it was the right one. I'm not sure about the other majors but every literature class I took had under 30 students (40 at most) and was almost always taught by a tenured professor: a PhD.

Classes kept me fascinated by day and their assignments kept me challenged at night. The other classes I took to meet my graduation requirements were equally rewarding. Looking back, it was fun.

If you have found your life's calling, you'll find that Rutgers is a great place to go as well. Many of their programs--undergraduate and graduate--hold their own against schools that cost twice as much. For the price you pay, you'll find that it's a bargain.

Rutgers has a large student body (a lot of students) as well as a lot of professors who are publishing great work (researching and sharing their findings with other scientists in their field). It has the resources to support both these demands. I'm shocked to discover that this isn't the norm at other schools, especially these days. What's everyone paying for?

Not interested in academics as much as a career after graduation? That's cool. Take a look at central New Jersey. There are a lot of businesses nearby that are drooling over Rutgers for interns and college graduates.

New Brunswick, New Jersey is home of Johnson & Johnson, one of the largest consumer product and pharmaceutical companies in the world. Many other multinational corporations have offices nearby because office space is cheaper than New York City.

Speaking of which, Rutgers is just an hour commute from Manhattan and Philadelphia is to the West, though a bit farther. Keep that GPA up, stay out of trouble and all these companies will want a piece of you! The only other competition is Princeton University but that's an hour south. Yes, the Ivy League Princeton University.

Or maybe you're sick of the Tri-State area. Who can blame you? Lucky for you people have heard of Rutgers. It's well-known throughout the country. At every job interview I had outside of New Jersey, they brought up my education. Every job interview.

They were impressed. So was I--I couldn't believe how my degree was still rewarding me. From Washington DC to San Francisco, Rutgers got my foot in the door.

So what can go wrong?

Rutgers University has its main campus in New Brunswick. Then there are satellite campuses in both Newark and Camden. This means that Rutgers is huge. So what's the problem?

Many introductory classes, something-something 101, can have almost a hundred students. It might have one multiple choice midterm and one multiple choice final. That's all. My Psychology 101 class was like that. The intro courses of other departments such as economics or biology are similar. It's easy for some students to sleep in, do some reading a couple weeks before the exams and settle for a C. Not cool.

Thankfully, the 200 and 300 level classes are much smaller but it's not easy to get into those classes unless you are a major. Can a person choose the right major based on a large 101 course? Not unless she goes out of her way to talk to professors and as well as other students to find out. This pretty easy to do but the whole thing can be intimidating for someone fresh out of high school.

There's also the bureaucracy. The students lovingly call it the "RU Screw." With a lot of students comes a lot of documentation. This means a lot of paperwork and signatures. If you haven't memorized your social security number by now, you will in the first couple weeks of your Rutgers experience.

Financial aid is pretty straight forward but it doesn't fall in anyone's lap. A student might have to make several trips to the financial aid office to make sure she gets it. She won't be the only one so she'll have to wait in line--a long line. Often times the fall semester feels like tax season.

There was even paperwork to graduate. I remember having to fill out a form to show Rutgers that I met all my course requirements. That's right: if I didn't fill out that single sheet of paper, they wouldn't have given me my degree. Not cool. It's slow and tedious but fortunately it's consistent. Do it right and there's nothing to worry about.

You'll find this in any large institution you attend and then in any large company you work for once you graduate. Rutgers is not shy about giving you a taste.

So is it worth it? It was for me

Ask yourself: what do you want? What will you pay for it? Times are always tough for someone and there's nothing wrong with weighing your options, dollar for dollar.

You've come this far so how about some trivia? I applied to five universities: two in New York, two in New Jersey and one in Pennsylvania. I was accepted into all five. One of them was my college of choice: New York University. It was my dream school. I wandered around Greenwich Village and Washington Square almost every weekend during the summer after my junior year of high school. It seemed like the perfect place for me.

Then I looked at the financial aid they offered me. It was flattering but it wasn't enough. Why was it so expensive? Where does all that money go? Like any other kid thinking the world orbited around him, I took it personally. I tossed NYU's, angry and betrayed (and bitter).

Rutgers was next. I looked at what they put together for me. I'd still have to take out student loans but I could make it work. So I went. It was one of the best decisions I've ever made.

Don't take my word for it!

Don't take my word for it. Here are reviews of some of the professors. Enjoy!