I am here to answer any questions that you may have about the San Andreas Fault. Like, where is it located exactly? What kind of fault is it? And what major earthquakes has it let off? I will explain the answers to these questions from both a personal and scientific view. I will also go over some basic geology ideas and terms to help you clarify any lingering questions. Now let’s get started.

Before I talk about the location of the San Andreas Fault I need to make it clear that the fault is actually a system of little faults called branches that all run in the same direction. So the San Andreas Fault system is located in the state of California. The fault starts in the Gulf of California, and travels north through Baja, past the Salton Sea, all the way up to San Francisco and exit’s the bay where it continues to run along the coast until it ends near Eureka, CA. It passes near or through cities like, El Centro, Palm Springs, San Bernardino, Palmdale, Parkfield, Santa Cruz and San Francisco. If you want to actually see the fault there are many places you can go too. Remember you will not see a huge opening in the ground but features that the fault produces on the surface. One place to visit is the Carrizo Plain National Monument about 100 miles north of Los Angeles. At this spot the fault has created many valleys and mountains that are visible as well as ridges on top of the fault itself. Another good place to see evidence of the fault is the Coachella Valley Preserve near Palm Springs. At this site you can see a branch of the fault called the Banning Fault. You can see the mountain features, the soil features and what is called a vegetation lineament, that is where there are more plants on one side of the fault then on the other. Soil features would include metamorphic rocks such as gneiss and a powder like ground clay. Also in Palm Springs you can see a different branch of the fault called the San Jacinto Fault. This fault is responsible for the San Jacinto mountains which are the tallest mountains within Riverside County. To see the mountains you can travel up the Palm Springs Aerial Tram to the top of the mountain and look down on the valley. Other places to see the fault occur along the fault line either a desert or a city that the fault runs through. The San Andreas fault is the separation between two tectonic plates. Tectonic plates are what make up the Earth’s crust where the oceans and continents rest on. On the east side of the San Andreas Fault is the North American Plate which is what the continent sits on. On the west side of the fault is the Pacific Plate. So the state of California sits on two tectonic plates.

Where to see the Fault

What Kind of Fault is it?

Now that you know where the fault is let’s talk about what kind of fault it is. First off some basic geology is needed. A fault is a deep crack in the Earth’s crust. Most faults are between two tectonic plate boundaries. There are three type of faults, a normal fault, a reverse fault and a transform or strike-slip fault. Each fault has a different motion or movement of the crust. The San Andreas Fault is a strike slip fault, more specifically a right lateral-slip fault. There are three types of strike-slip faults however a right lateral slip means that the that if you were to look at the fault head on, then the right side of the fault would be moving towards you. See the difference between a right lateral and a left lateral in the side picture. What does a right lateral fault mean on the San Andreas? Well it means that everything on the left side of the fault is moving northward towards Alaska. It’s like moving two pieces of bricks against one another. With the left side moving away from you and the right side moving towards you. You probably are wondering why the San Andreas faults build mountains if all they do is slide past each other horizontally. Well this is because of another type of strike-slip fault called the oblique-slip fault. The oblique fault moves horizontally as well as vertically. Some of the branch in the San Andreas fault system are in fact oblique-slip faults. Those branches are what build the mountains, like the San Jacinto. These strike-slip faults can have either shallow or deep earthquakes. Shallow and deep meaning the depth the earthquake starts at in the crust. These faults can let off huge earthquakes, a range up to possible 9.0 on the Richter scale.

What are the Historical Earthquakes?

Well now that we know about the location of the San Andreas and what type of fault it is, let’s discuss it’s history with earthquakes. I’m sure that most of you know about the 1989 San Francisco Earthquake also known as the “World Series” earthquake because it interrupted the Baseball World Series game that was held in San Francisco. This specific earthquake is called the Loma Prieta Earthquake because it actually originated in Loma Prieta just south of San Francisco. Another famous earthquake in San Francisco is the Great Earthquake in 1906. This quake is said to be about a 6 on the Richter scale. The main cause of damage from this earthquake came from the fires that lasted days. Another big earthquake that caused lots of damage was the 1994 Northridge Quake because it collapse apartment buildings killing some people. It made people in the Los Angeles area really think about building codes that could withstand earthquakes. Here is a list of other major historical earthquakes that have occurred along the San Andreas Fault.

Hopefully now you can answer any question that you may have had about the San Andreas Fault.

You know where it is located. Which is in California from Baja to San Francisco. You know what kind of fault is it. A right strike-slip fault, which means that the left side of the fault is moving northward. And lastly you should know about the major earthquakes it has let off. The two quakes in San Francisco, the Northridge earthquake and the Lander’s quake that we didn’t talk about. The Lander’s quake did not cause a lot of damage but it was however a magnitude 7.3 meaning that if it was near a big city it would have caused massive damage. So now that you know about that San Andreas fault you should be able to answer any question that your friends may have.

If you have any other questions concerning earthqaukes just let me know. I will try to answer them as best as I can. I have taken a few geology and earth science courses in college. 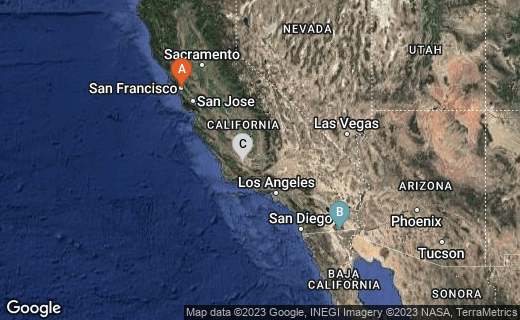 The San Andreas Fault starts at the end of the Gulf of Baja, near Mexicali, Mexico.

Here you can view the San Andreas fault on the surface.