Scargo Tower and the Legend of Princess Scargo

Katharine is a lifelong resident of Cape Cod, Massachusetts and loves the history of the area.

The small town of Dennis, Massachusetts, on beautiful Cape Cod is a wonderful place to visit. With its pristine beaches and excellent hotels and restaurants, it is popular with tourists, especially in the summer months. Few visitors realize that the town is also steeped in history, and there are several historic homes and sites to see there. One of these is Scargo Tower, which overlooks Scargo Lake.

Scargo tower, a 30 foot high cobblestone structure, was originally built of wood. This first tower was built in 1874 by the Tobey family next to Scargo Lake, on a hill which is the highest point in the mid-Cape area. The Tobey family had been well respected members of the community since the mid-seventeenth century, and they owned a luxurious hotel nearby at the time. The tower was meant to be an attraction for the hotel's guests to visit for wide vistas of the Cape.

The wooden tower was blown down in a gale two years after its construction, but was rebuilt, again of wood, and this version stood until a fire claimed it in 1900. The current tower, of stone this time, was completed in 1901, and still stands strong atop Scargo Hill. It is free to visit, and is well worth the climb up the spiral staircase to the top, where you can see the lake below and Cape Cod Bay beyond, as well as the entire Cape Cod coastline, to the tip of Provincetown. On a clear day, you can even make out the Provincetown monument, across the glistening waters of the bay.

The Legend of Princess Scargo

No visit to the top of Scargo tower would be complete without a telling of the old Indian legend about Scargo Lake and the tribe who once lived along its banks. According to legend, prior to any lake being there, a tribe of Wampanoag Indians lived in the area of the hill where Scargo Tower stands today. The Sachem's beautiful young daughter, Princess Scargo, met and fell in love with a handsome brave from another tribe, who was obliged to leave the area to fight in a battle off-Cape. Before leaving, he gave Princess Scargo a hollowed out pumpkin that contained three small fish, and promised that he would return before the fish matured.

Sadly, two of the fish died while the Princess was waiting, and she feared that the third would soon succumb. Seeing his precious daughter so unhappy, the Sachem ordered his braves to stand in a line and shoot their arrows as far as they could. Where the arrows fell marked the far boundary of the lake that they would build for Princess Scargo's fish. Everyone worked to dig the lake, even the women, who dug the sandy soil with clam shells for their beloved Princess.

At last the lake bed was dug, but before the rains could come to fill it, the news arrived that Princess Scargo's young brave had been killed in battle. Her tears of grief were so copious, that they filled the lake, where she freed the last fish that her lover had given to her. Its descendants still swim the waters of Scargo Lake today, which can be seen, from the tower, to be in the shape of a fish, with the triangular "tail" at one end, the rounded body, and head on the other side. You can see this shape fairly well in the photograph below, taken from the top of the tower, with Cape Cod Bay behind it.

A careful look at the shots of the lake in this video will also reveal its unique shape.

If ever you have the chance to visit Cape Cod, don't miss the charming town of Dennis, which lies about halfway down the "arm" of the peninsula. While you are there, take a moment to visit Scargo tower and climb to the top where, as you gaze over the vista of land, sea and sky, you might tell the ancient legend of Princess Scargo. 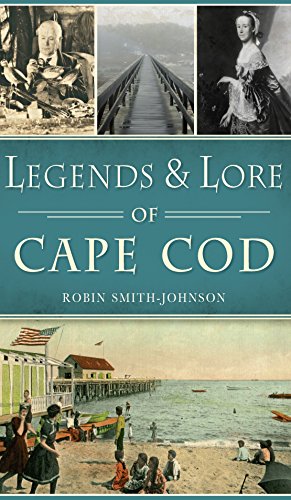 There are so many legends and tales that take place on the "narrow land" of Cape Cod. This book contains the legend of Scargo as well as other Wampanoag tales, murders and mysteries, seafaring adventures, and ghost stories, all with a special Cape Cod twist. It is the only book I know of that contains the Scargo legend, but it is well worth the read for all the other Cape Cod stories it includes.

- My own knowledge as a lifelong resident of Dennis, Cape Cod.